BREAKING THROUGH: Rebels ‘made ourselves relevant’ with season of firsts 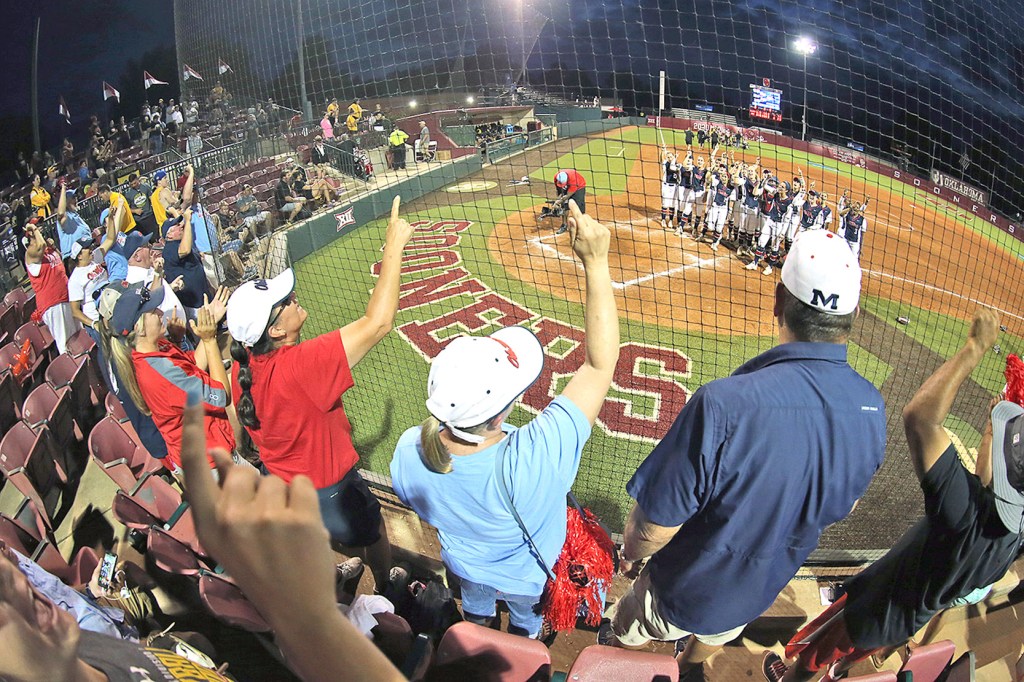 Ole Miss softball players celebrate with fans following a win over Wichita State in the Norman (Oklahoma) Regional on May 21. It was the Rebels’ first-ever appearance in the NCAA Tournament, capping a historic season for the program. (Photo by Josh McCoy/Ole Miss athletics) Photo by Joshua McCoy/Ole Miss Athletics @olemisspix

The days of Ole Miss softball being bullied are over.

At least that’s the message head coach Mike Smith believes his team sent to the rest of the country this season.

In just two seasons at the helm, Smith has started a turnaround that saw the Rebels play in the NCAA Tournament this spring. Any real amount of success has been hard to come by for a program that put together just its fourth winning season since 2005, but Ole Miss experienced an amount it never has this season that Smith hopes laid the groundwork for bigger things to come.

Ole Miss set a single-season school record with 41 wins and won 11 Southeastern Conference games, tied for the most ever in a season, to finish ninth in the league standings after being pegged to finish next to last in the preseason. The Rebels won their first-ever SEC Tournament game with a 4-2 upset of then-No. 15 Georgia and earned the program’s first regional berth in school history, beating Tulsa in its NCAA Tournament debut before being eliminated by eventual national champion Oklahoma.

“We’re just not the program on the schedule where teams are going to go in and think, ‘OK, this is an opportunity to get two easy wins,’” said Smith, whose first two Ole Miss teams are the first in school history to post back-to-back winning seasons. “I think it shows that we’re relevant and that we are potentially a top-25 program playing in the SEC and competing daily with the best teams in the country. … I think we have kind of arrived and made ourselves relevant in the softball world.”

Smith, who was recently awarded a contract extension, would be lying if he said he saw all of this coming this soon, though he said he had an inkling this year’s squad would be “pretty decent” with young talent blending with significant contributors back from a 30-win team the previous season. Senior Madi Osias grew into an ace in the circle with a 23-10 record and a 2.97 earned run average, Ashton Lampton, Dakota Matiko, Miranda Strother and Elantra Cox all hit .300 or better and shortstop Hailey Lunderman was a sparkplug as a freshman, bursting onto the college scene with a team-best .371 average.

Unwavering approach
But the biggest reason for the quick fix, Smith said, has been a shift in the mindset of the program that started when Smith was hired away from McNeese State in May 2014. Leading McNeese State to back-to-back Southland Conference regular season championships before arriving in Oxford, Smith had a disciplined way of winning, something he wasn’t about to change at his new gig.

“If (a player) had an academic issue, they got suspended for certain games,” Smith said. “If they didn’t do something on the field, they didn’t play. If they missed signs, they didn’t play or they came out of ballgames. It just became a black and white program. There was no gray area. I think that’s how it’s been at every program that I’ve been at. We train these girls as a blue-collar mentality.
“Losing became not OK with our players, and I think that really changed our mindset. Even last year, I think losing was OK for some of them. We really focused on that this year, and losing wasn’t OK.”

The Rebels will have to find another No. 1 option in the circle with Osias out of eligibility, but they’ll have more players back than not with every position player from the regular lineup returning.

The objective now is to do more than taste the postseason.

“Our process now is to win the regional and host. We’ll take that,” Smith said. “Any time you get to a super regional, anything goes because it’s the best 2 of 3 series. I think if we have an opportunity to win a regional and fulfill that one goal, I think it’s a very realistic goal to get to Oklahoma City (for the Women’s College World Series).”