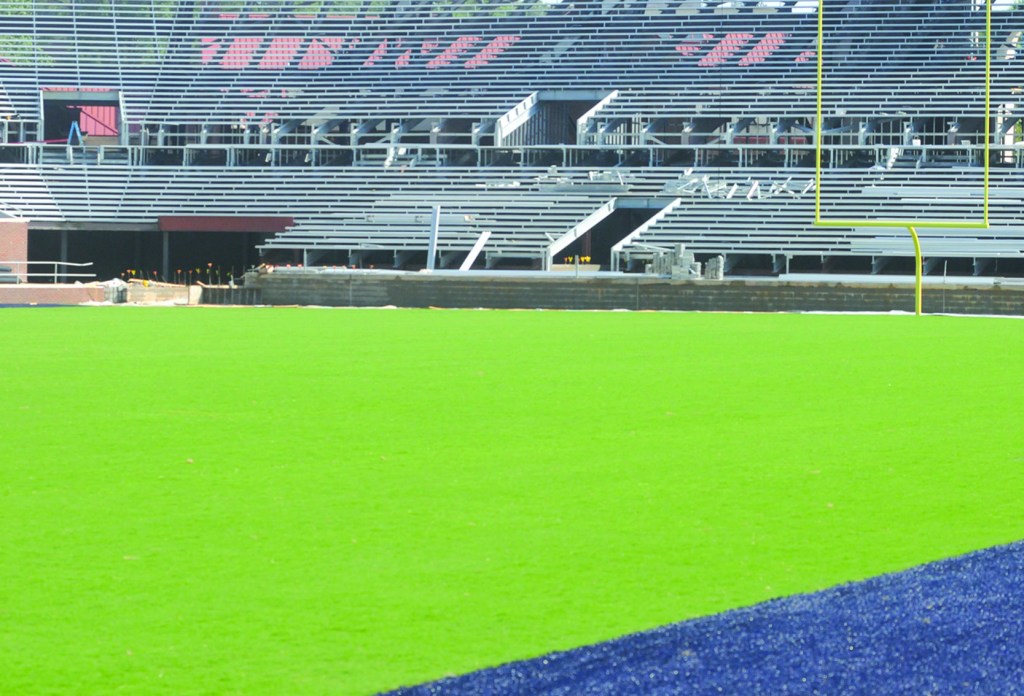 It is less than three months before the first football game of the 2016 season is played inside Vaught-Hemingway Stadium, and with multiple projects going, everything is still going according to plan.

As has been heavily documented on social media with the help of campus webcams, the installation of the natural grass surface has been completed, replacing what had been an artificial turf field since 2009. The TurfField was installed during the Houston Nutt era, which replaced what had been an AstroTurf field the six seasons prior to that.

Before the natural grass field was installed, Ole Miss and Arkansas were the last two schools in the Southeastern Conference to play football on an artificial surface.

“It was about time to replace the turf. It had kind of lived its life,” said Joseph Swingle, Ole Miss’ associate athletic director for facilities and game operations. “The question was do we want to go to artificial, or leave it artificial, or do we want to go to natural? We talked with (football) coach Hugh (Freeze) and (athletic director) Ross (Bjork) and they made the decision to go to natural.”

Swingle is also part of the facilities and event management and was heavily involved with the construction of the brand new Pavilion.

The Bermuda grass, or Tifway 419, was installed on time without any hiccups or weather delays and will require about eight weeks to grow in. Assistant director of turf management Brian McNeill will oversee the remainder of the process and is responsible for all the watering and fertilizing.

The grass installation was one of five projects taking place inside Vaught-Hemingway as the North end zone is finalizing its construction of bowling in the entire stadium as well as the continued renovations in the South end zone. With that many cooks in a kitchen, communication was key.

“We have a coordination meeting every week with all of our general contractors,” Swingle said. “We have about five contractors working right now with the North end zone, South end zone, football field, the lights, the sound system, Daktronics (jumbotron). … I thought the Pavilion and the little bit of work that we did at Vaught-Hemingway last summer was pretty hectic. But I will say with the 64,000 people waiting to come in in September, this one’s had a little bit more pressure, but it’s been great.”

The final get-out date for all projects to be completed and to allow time for final touches to be completed before Ole Miss hosts Wofford on Sept. 10 is Aug. 18, giving Swingle and his staff more than three weeks to get it cleaned up.

The North plaza with the letterwinners wall and bell plaza will still be under construction during at least the first portion of the season, but there will be a fence with all the letterwinners’ names to allow people to get a glimpse of what the completed structure will look like.

Practice fields update
Vaught-Hemingway is not the only football field to get a makeover as the practice field complex is undergoing renovations as well after losing an entire field to the new parking garage next to the Pavilion.

Installation of the grass for the practice fields will begin next week and should be completed in time for the beginning of fall camp in August.