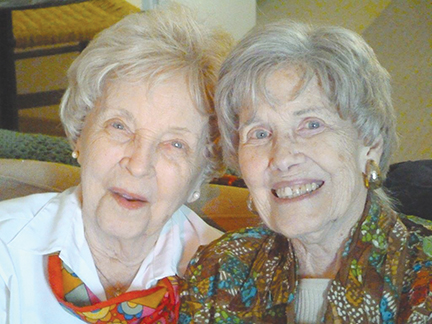 Margaret Ferguson will turn 100 years old in December, but not before her sister Ruth Ellen Hill turns 101 in October.

Ferguson suspects her family will throw her a big party like her sister had when she turned 100. Hill said she wasn’t sure how she will spend her birthday.

The two sisters both live in Oxford. Ferguson lives at Brookdale assisted living and Hill is little down the road at Oxford Health and Rehab.

Neither sister can give you the secret to their longevity. The women have some health issues as expected, but they both can walk and their minds are sharp. Hill said there’s no greater gift than that.

“We’re blessed,” she said. “I see people here every day who aren’t so lucky. They’re alive, but they aren’t living.”

The two women came from Indiana originally and moved to Oxford in the 1990s. Ferguson moved to be closer to her only child, Jim McCauley. Hill never had children. She said all of her love went to her nephew Jim and his family.

“Isn’t it something?” Ferguson said.

Ferguson was married twice during her life, first to Paul McCauley, who died in 1944 from lung cancer, then to Paul Ferguson, who died in 1952 from a heart attack.

In the 1950s, she owned a record store where she sold 45-rpms and all the kids hung out to hear the latest single. Her husband owned hardware and clothing stores and she would often help him at the stores after closing the record shop. Her biggest accomplishment in life, she said, is her son and grandchildren.

Hill was married to Elvin for many years until his death in 1977. She never remarried. She worked in the world of radio. She has a good voice, she said. She was the funny, strong-willed sister, while Ferguson was the beauty, Hill claims.

“She was an exceptionally beautiful child,” Hill said of her sister. “And still is.”

Ferguson likes to go to Tunica, once or twice a month when her son is able to take her. She plays the slot machines. Hill would rather play bridge.

The two lost their mother when they were in their teens when she died at age 39 while giving birth to their brother, James. They have a younger sister, Rosanne, who was 3 when their mother died.

“Ruth took over taking care of everyone,” Ferguson said.

“Someone had to,” Hill added. “There was no choice. Our father had to work.”

James and Rosanne are still living and are both in their 80s.

The two sisters remain close and speak daily on their cellphones; however, Ferguson isn’t overly fond of the “little things.”

“People don’t talk to each other anymore,” she said. “They just sit with those things in their hands, staring at the phone.”