Veteran continues to serve through music 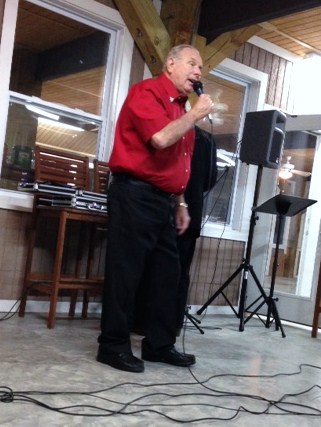 Gerald Belvin spent 20 years in the U.S. Marine Corps. Eight of those years were spent overseas and included two tours in Vietnam with the Marine Corps Air Wing division.

Today, he continues to give to his country by making other veterans smile through music.

He and his wife, Wanda, moved to Oxford in 1980 after he retired from the military as a gunnery sergeant. He worked at Borg Warner for six years then became a mail carrier with the U.S. Post Office until he retired again in 2001.

Belvin, 74, got into the karaoke “business” about 10 years ago as a way for the local veterans clubs to raise funds. He’s a member of the Veterans of Foreign War, American Legion and the Disabled American Veterans. All three clubs use the Veterans Building on Veterans Drive near the State Veterans Home.

“We started doing karaoke on Friday nights as a fundraiser and it’s kind of branched out from there,” Belvin said. “We didn’t really know what we were doing back then but we learned.”

For the last eight years, Belvin — along with his wife, fellow veteran John Swain, and other veterans — has been doing karaoke at the State Veterans Home twice a month. Sometimes the residents sing. Most times Belvin sings.

“I sang in church growing up, but I never did karaoke until we started doing it at the veteran’s building,” he said. “Now we have a real big following every Friday night.”

Belvin, who has held the position of quartermaster with the VFW for several years, will often bring his karaoke equipment to local churches, assisted living facilities and Leisure Lifestyles, the area’s recreational program for adults ages 40 and up.

He and his wife also often volunteer with the Retired Senior Volunteer Program.

“We do just about whatever they ask us to do,” Belvin said. “We call bingo and visit with people in the hospital.”

Belvin said volunteering helps him to get off his couch and keep busy instead of just sitting around.

“I see myself getting older,” he said. “I just hope there’s someone out there who will sing a song to me and make me happy.”