Family unit bonded by working together 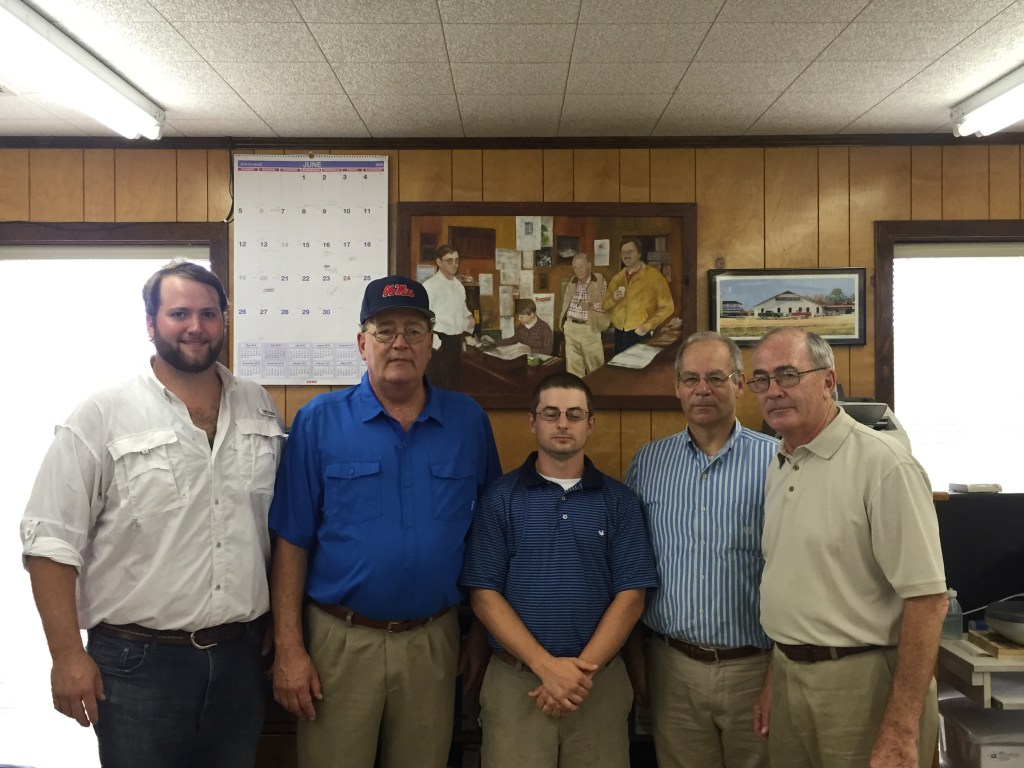 Fifty-six years after its founding, Smith Building Supply continues to keep it all in the family, and several family members stand by an old family photo, including Michael Smith, Mike Smith, Nathan Smith, Alan Smith and Tommy Smith.

On occasions like Father’s Day, it’s always a worthwhile exercise to look at the experiences, relationships and values that have been shared across generations of one’s family.

At local business Smith Building Supply, the company’s history spans three generations, and the Smith family continues to work side by side at its location on Highway 334 to this day, keeping these relationships and values alive that make families so special.

Alan said he and his brothers have been involved in one way or another with the family business since they were growing up.

“For summer jobs, my brothers, both of them, worked when he built houses,” Alan said. “That’s how he got started, he built a lot of houses in town. They all worked for him during the summer. By the time I came along, he had pretty much quit doing that, and I just worked on the yard during the summer.”

Over the years, the business has been a way by which the Smith brothers, and eventually their children, have been able to stay closely knit, to the point where Alan humorously noted that holidays, normally reserved for the rare occasions on which families can come together and spend time with each other, tend to be viewed differently in the Smith family.

“We all do it because we like it, and we still like it,” Alan said. “Somebody asked us one time something about, ‘Do y’all like getting together for Christmas?’ And I said, ‘Why would we want to do that, we see each other every day of the year?’”

As for his own father, the first thing Alan recalled about him was his hard-working nature, which let up for only one day a week.

“He worked a lot,” Alan said. “He was from a different generation. He took Sunday off. He didn’t do anything on Sunday.”

Although his father passed away in 1984, his legacy has lived on through the lessons and values taught to his sons, extending beyond his example of the merits of hard work.

“You’ve got to be honest,” Alan said, recalling one of the major lessons he has carried through his own professional life that he learned from his father. “People appreciate that, and people will come back. Word of mouth, what people say about you in business, is as good an advertisement as you’re ever going to get.”

The lessons didn’t stop there, though, according to Alan.

“Treat people like you want to be treated,” he said. “Be nice to them, be courteous, and be respectful, regardless of who you are. To be in business, you’ve got to do that, and he instilled that in all of us.”

Alan used a classic Southern adage to explain his upbringing and his views on respect for others, saying that his father raised him and his siblings to be “yes, ma’am and yes, sir” people.

Now that he is grown, has had children of his own, and watched them grow up, Alan said that one of the joys of running the business is to see parents bring in their children and to observe the reactions of the kids as they take in their strange, fascinating surroundings with their childlike curiosity.

“My kids grew up in here, looking at and touching everything,” Alan said. “It sort of tickles me when people come in and bring in their kids that have never been in a place like this. They’re just amazed.”

As for his and his siblings’ own children, Alan laid out a laundry list of activities with which they were involved with their kids as they grew up, ranging anywhere from Boy Scouts to dirt bikes to competitive sports like baseball and soccer.

However, one of the biggest things they ever did for their children, Alan said, is to pass the lessons and values they received from their father down to their own kids to help them grow into the people they have become, as they continue to work beside each other at Smith Building Supply.

“We try to instill the same values in them as far as being honest and being truthful,” Alan said. “That’s what’s going to keep bringing people back.”