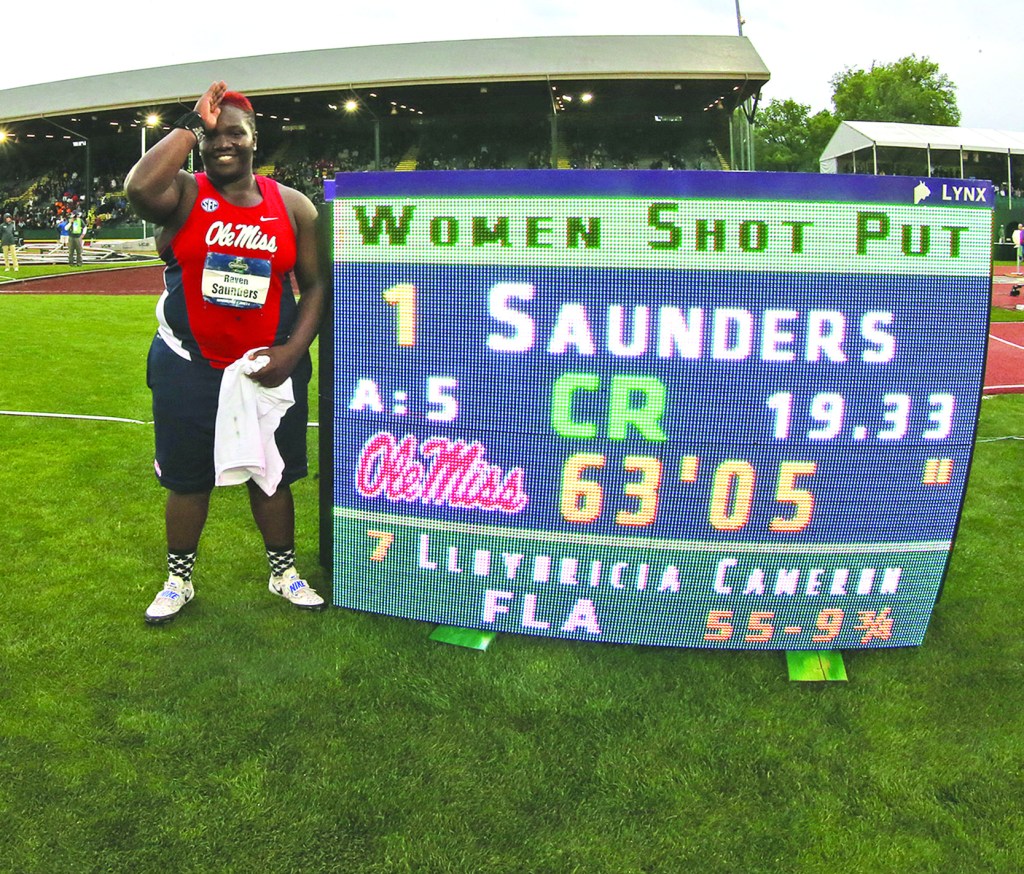 To say Raven Saunders has had a fairly decent year would be one of the biggest understatements of 2016.

The Ole Miss track and field star has solidified herself as the top female in shot put, claiming her third national title earlier this month in the NCAA Outdoor Track &amp; Field championships in Eugene, Oregon.

She did it the only way she knew how, by shattering another record.

The sophomore transfer student from Southern Illinois broke a 33-year-old record with a throw of 63 feet, 5 inches. Saunders set the new record by over a foot, besting a throw from Arizona’s Meg Ritchie, who set the record in 1983 with a throw of 62-3.

“It was nice,” Saunders said. “I really wanted to get back on the saddle after losing indoors and basically wanted to prove myself and show everybody that indoors, it happened, but now I’m back.”

Saunders set the record on her fifth toss, but during her warm-ups and initial tosses, she had a feeling a personal record was about to happen. She had two attempts of even longer distances the weekend before at the NCAA East Preliminaries in Jacksonville, Florida, but faulted on each one, resulting in them being scratched from the competition.

All the Charleston, South Carolina, native has done since then is add to her trophy case.

Rio bound?
Now that she has conquered the collegiate stage, Saunders is turning her attention toward a global stage and August’s 2016 Summer Olympics in Rio de Janeiro, Brazil.

She must qualify at the U.S. Olympic Trials, which will be held in Eugene, Oregon, from July 1-10, but as Saunders has already proven, she enjoys competing at Tracktown USA.

“I love Eugene,” Saunders said. “It’s hands-down probably my favorite place to go and compete. Just the atmosphere and how knowledgeable the crowd is about every event out there. It’s just really relaxing to go out there and compete.”

To get a feel for the level of competition she will be up against at the Olympic trials, Saunders is heading back to her old stomping ground at Southern Illinois for the SIU Saluki Throws Meet on Wednesday.

“I’m extremely proud of (Saunders),” Ole Miss track and field coach Connie Price-Smith said. “She’s been competing very well and doing things really good. …We’ll go to Olympic trials and see what happens there. She’s got a big future ahead of her. She’s really young and she still has an upside and is still learning the event.”