AIRING IT OUT: Chargers, ‘Dores compete in local 7-on-7 tourney 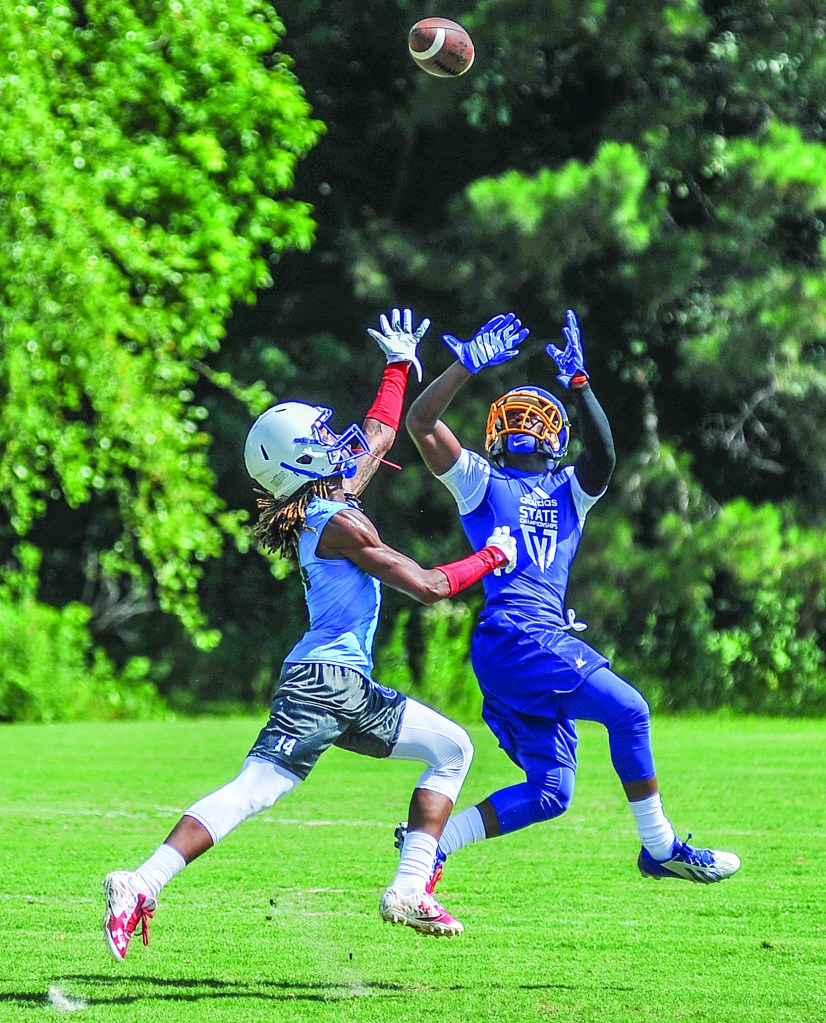 Oxford’s Hiram Wadlington, right, makes a touchdown catch against Grenada’s DeMarcus Archer (14) during their game in poll play of the Airo 7v7 Tournament at FNC Park on Tuesday. The Chargers were eliminated by Pontotoc in the quarterfinal round. (Bruce Newman)

It is summertime and that means high school football is slowly starting to ramp up toward a new season in August.

That continued on Tuesday as both Oxford and Lafayette participated in the Airo 7v7 Tournament at FNC Park.

The tournament sends the final two teams straight to the championship bracket of the High School Football Network (HSFN) 7-on-7 tournament held in Madison this weekend.
Oxford and Lafayette were unable to make it that far but the two did manage to meet one another during the day.

After both going 2-3 in the morning’s pool play portion of the tournament, the crosstown rivals were grouped together in the first round of the elimination stage.

Oxford’s path to the Commodores resulted in a win over Grenada and a forfeited win over Greenville, who did not make the trip to Oxford for the tournament, in the pool play. The Chargers fell to Clinton, Clarksdale and Hattiesburg.

“One of my favorite things about 7-on-7s is it’s a chance to put guys in tough situations before the fall, before a Friday night,” Oxford coach Chris Cutcliffe said. “See how they are going to respond and you can kind of see who’s going to lead when something goes wrong. We started out kind of slow (Tuesday morning). So, it was good to see how guys responded to that.”

Once the elimination portion got started, Oxford made a run to the quarterfinals before getting eliminated by Pontotoc, 16-15.

The Chargers first took care of Lafayette by a score of 26-14, then avenged their loss to Clinton earlier in the day with a 18-8 victory in the second round.

Oxford’s day ended when they were unable to convert the extra point and could not stop Pontotoc on third down for two points and what would have earned them a trip to the semifinal round.

“You’re out here a long time and it’s hot and it’s hard to get up for the game over and over and over,” Cutcliffe said. “But, just naturally, of course a rivalry game is going to give you a little energy. I did think we kind of got energized and competed a little better (against Lafayette). I don’t know if it was just because it was the start of the tournament or because it was Lafayette but that kind of carried us through.”

First taste
Lafayette’s march towards their showdown with the Chargers saw them earn wins over Charleston and South Pontotoc but fell to Senatobia, Noxubee County and Houston.

It was the first glimpse of what the crosstown rivalry is all about for new Commodore head coach Michael Fair, albeit a very small one with only seven of the usual 11 players on the field.

“I like it. It’s a great rivalry,” Fair said. “It’s a great, healthy rivalry and really out of respect. You can just see it from the coaches and all the way down to the players. They respect each other and I just can’t wait for it this fall.”

Quick turnaround
For Oxford, there is not much time to rest and rehydrate from being out in the heat all day Tuesday. The Chargers will head down to Madison to take part in the HSFN tournament Saturday and Sunday.

Since the Chargers were unable to become the final two teams standing at the end of the day on Tuesday it will be two more full days of competition, just three days removed from another all-day event.

“It’s tough. We don’t normally like to do two in the same week,” Cutcliffe said. “It’s just kind of how this calendar fell. This tournament had a 20-man roster and most others we play in, like this weekend, has 25-man rosters. So, that puts even more stress on your guys playing in the heat all day.”