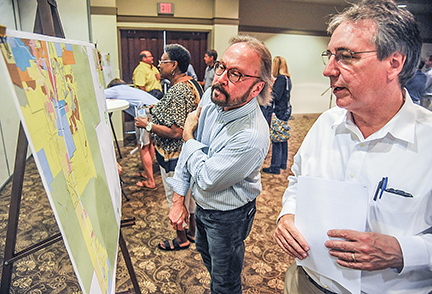 There were a lot of nods by Oxford residents Wednesday night while they looked over the city’s proposed future Land Use Types Map on display at the Oxford Conference Center.

The maps look much different than the current map, with more colors and more “types” of development.

City Planner Judy Daniel said the previous land use map showed one type of development in a particular area — multi-unit, single family, and others.

“In terms of thinking of how Oxford might grow, this needed a broader palette of breakdowns of that use type,” Daniel told those attending the viewing.

The idea was to plan Oxford to be more like how the Square and surrounding neighborhoods operate.

“There is a center, there is a gathering place surrounded by various densities,” she said. “There’s places to hang out, places to shop and places to live.”

The future plans for Oxford will include more mixed-use developments.

The new Land Use Types Map is part of the city’s updated Comprehensive Plan, dubbed Vision 2037, that is expected to go up for approval to the Oxford Board of Aldermen by late summer or early fall.

The city began working on the updated comprehensive plan in March 2015 after hiring the Orion Planning Group to assist with the process.

Those attending Wednesday were asked to fill out comment cards to be recorded and forwarded to aldermen.

Developer Jeff Williams said while he hasn’t been able to study the maps closely yet, he was pleased with what he saw Wednesday.

“It’s so different than what we’re used to,” he said. “But if they stick to this guide and keep an open mind, I think we have a good plan.”

The Land Use Types Map is not a zoning map. Any possible zoning changes to the city’s current zoning will take place after the Vision 2037 plan is approved.

The main map was blown up and on display, along with several zoomed-in maps focusing on different sections of the city so visitors could see each area of Oxford clearly.

Ward 3 Alderman Janice Antonow stood by the maps showing her ward, speaking with her constituents as they looked over the map. She said she believes the city is on the right track with the new map.

“I think when we get the zoning in place, it will be more specific and people will know just what can be done with the property. It might not be like the one we have now. It could have different categories, different setbacks and densities.”

Nottingham resident Binn Hutchcraft came out to see the proposed land uses around his neighborhood, specifically, the 25 acres that were once slated to be home to a new, expanded FNC Inc., which was purchased by CoreLogic last year. CoreLogic announced recently it has halted plans for the expansion and did not have immediate plans for the property.

“It should remain office space or something like that and not used for commercial or multi-residential development,” he said.

While the Land Use Types Map generally deals with Oxford’s city limits, it highlights some areas of possible future annexation in the county as well. Lafayette County Supervisor Kevin Frye came to the event Wednesday to see what the city’s plans were for those areas down the road.

Lafayette County also is currently undergoing an update to its comprehensive plan.

“Next week the city will present their ideas for growth into the country to the steering committee for the county’s comprehensive plan,” Frye said. “I am looking forward to having a conversation with them about the city’s plans for those areas.”