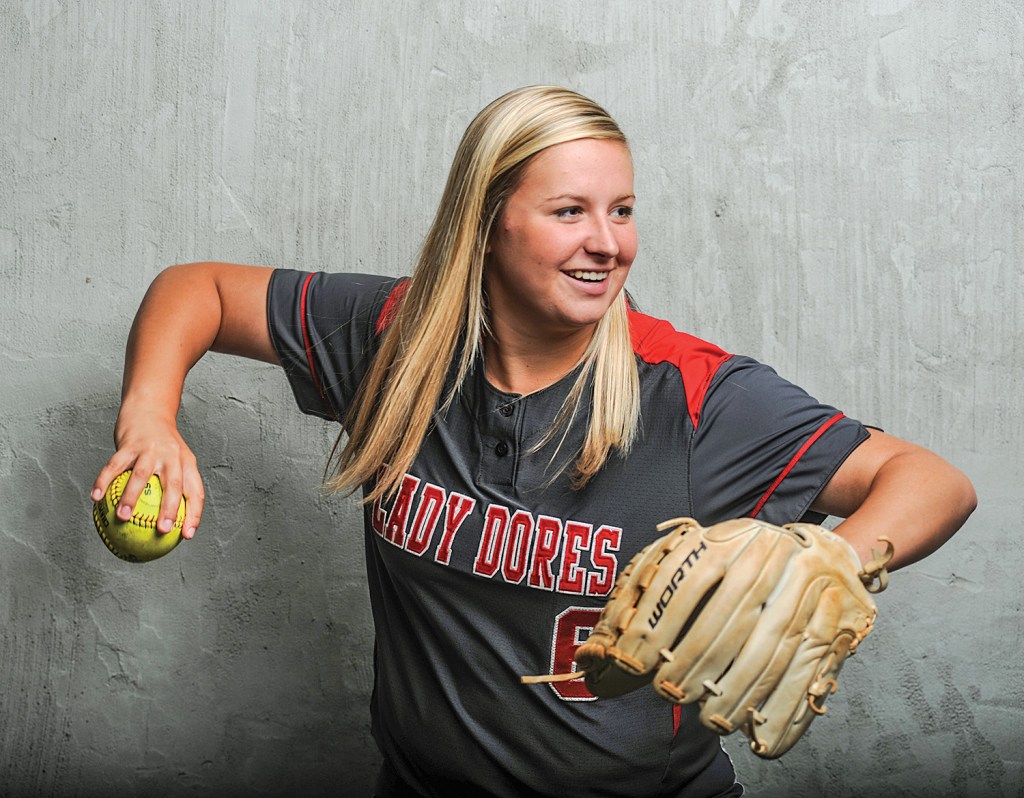 Lafayette will be without a key piece to its infield next year. Emily Robison, starting shortstop and sometimes third baseman, graduated this year but not before proving she is one of the best on the softball field.

Robinson had another outstanding season for the Commodores, leading in all but two offensive categories. It earned her a second year on the EAGLE All-Area softball team as well as the Player of the Year for the second time in as many seasons.

This is becoming old hat for Robinson, who has been the Player of the Year for both softball and volleyball four straight times.

“I’m definitely honored just to have this opportunity,” Robinson said of the accomplishment. “I have to give it to my coaches in volleyball and softball. Then there comes my family. They were a big part of it, too. They were always there to help me out.”

After dominating on the volleyball court in the fall, she has proven to be able to continue that success in the spring.

For the past two seasons, Robinson has been a dominant force for Lafayette at the plate and in the field. Of the everyday starters, she was second to only Cylie Robertson (.487) in batting average, hitting .482 (40-for-83). The 40 hits tied for the most on the team with Hope Patton, and her 26 runs batted in were a team-high. Robinson also led the team in home runs with four. No other player had more than one.

“I saw the ball, it was like a beach ball in some games,” Robinson said. “And some games I wasn’t on top of it as I was some other times. I think things just happened that you don’t really know about.”

Defensively, Robinson struggled at times with a fielding percentage of .875, good for 10th best on the team, with 11 errors. She was responsible for helping turn six double plays as well.

“I would say I’m just as confident out there as hitting,” Robinson said. “That was my third year to play shortstop, and I definitely felt like as an infield, all four of us were seniors so we definitely communicated well.”

Heading into her senior season, Robinson had already secured her future past high school, signing with Jones County Junior College in January. While her numbers may not have been as high as her junior year, she played much more loosely knowing there was not any pressure to still decide her college or that anybody may be in the stands watching her play.

“My junior year, I was more tense,” Robinson said. “This year, I kind of got up there and was just more relaxed. … Everything works out.”

Joining Robinson on the team from Lafayette are the aforementioned Robertson and Patton along with Kylie Glass, Xhiir Burgess and Chloe Russell.

Along with leading the team in batting average, Robertson had 16 RBIs and six doubles. In the field, the sophomore had an .833 fielding percentage.

“(Robertson) is a very good utility player,” Lafayette coach Katie Jenkins said. “I’ve had her in the infield some and the outfield some. … She gives me 100 percent, and she has a lot of passion for the game and having an attitude a lot like Kylie Glass.”

Along with Robinson, Jenkins will be losing her everyday third baseman as Glass graduated in May. The senior duo would swap positions at times but still provided stability on the left side of the infield.

“It’s real hard to replace that and you don’t realize it,” Jenkins said of losing Robinson and Glass. “You take it for granted a lot until they’re not there. Just them knowing each other, playing with each other. … They had a real good communication skill.”

Patton was the starting catcher but after losing an outfielder during the year, Jenkins had to move her from behind the plate to first base. Defensively, Patton had a .949 fielding percentage, only one point behind Russell, the team leader, in that category. She was a power threat, hitting .483 with 16 extra-base hits, 10 of them being triples.

“(Patton) worked hard during the year,” Jenkins said. “She was going to be our varsity catcher this year but then an outfielder quits and then I had to move an infielder to the outfield. Then I didn’t have a first baseman. I pulled her and made her go out there and it was real hard for her at first. She really fell into that role and being a counselor and helping me out and became more comfortable at first.”

Russell was a key piece inside the circle, transferring from Oxford during the offseason. She finished with a 4.08 earned run average and a 6-5 record. Russell was the heavy lifter for the Commodores’ pitching staff, working more than 80 innings while striking out 54.

Burgess will not be returning for her sophomore season as she decided to hang up her glove to focus on track and field. The freshman hit .404 with 10 RBIs.

Representing the Chargers this year are Madison Crosby, Kaytlon Pegues and Kyla Malone.

Crosby provided stability in the circle after the departure of Russell. She worked nearly 68 innings for an ERA of 4.96, striking out 49 and walking 61. Offensively, Crosby was Oxford’s best hitter, going 34-for-84 (.479) and recording 30 RBIs and three home runs.

Pegues hit .324 for nine RBIs and seven extra-base hits. Malone was the Chargers’ second-best hitter behind Crosby with a .441 average, 10 RBIs and tied Crosby with three home runs.

Anna Mills Avant, Taylor Anne Trusty and D.J. Douglas represent the Blue Devils to round out the All-Area team.

Avant also pitched in 12 games and had a 1-1 record and recorded five saves. She led the team offensively, posting a .491 average with 14 RBIs and eight extra-base hits. In the field, Avant had a .954 fielding percentage and a team-low three errors.

Trusty was right behind Avant in nearly every offensive category, hitting .364 for 11 RBIs.