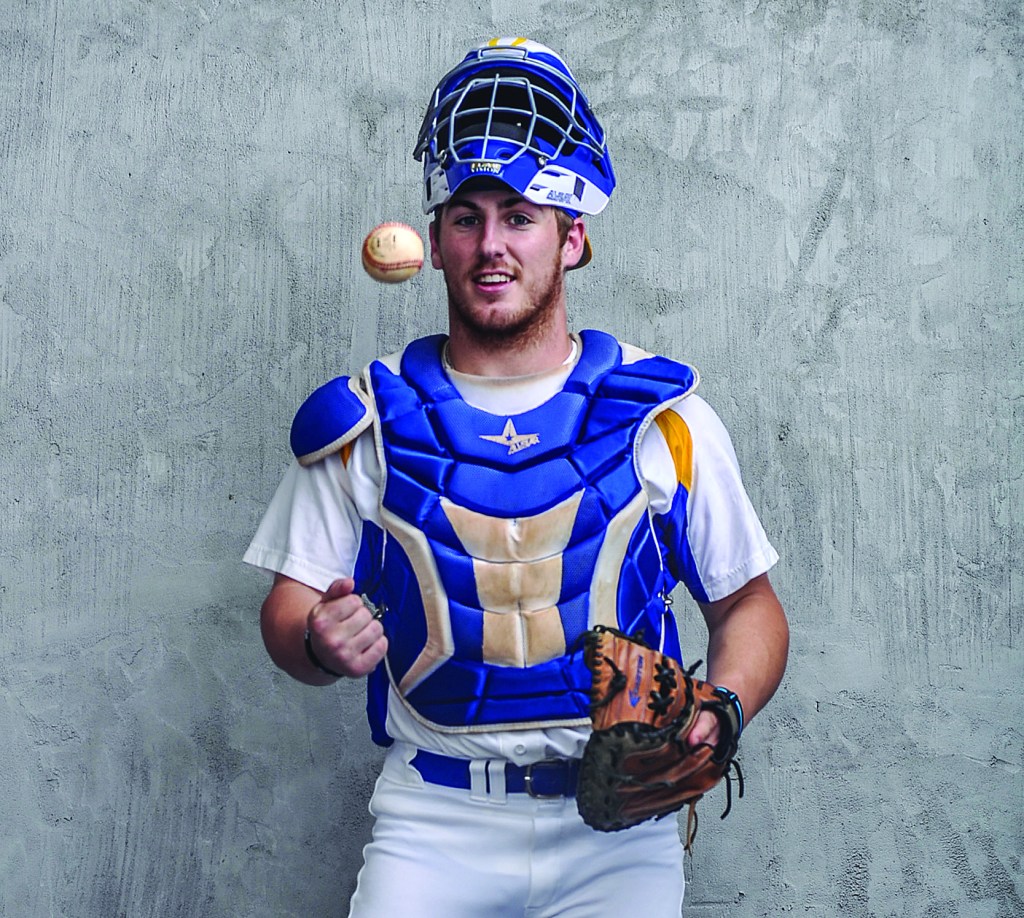 Thomas Dillard was Oxford’s everyday catcher in his only season with the Chargers, but the Ole Miss signee made his biggest impact with a power stroke that proved to be the nation’s best. (Bruce Newman)

By the time one of the best hitters in school history was done with one of the best individual seasons in the history of the program, Oxford coach Chris Baughman had run out of superlatives for Thomas Dillard beyond the obvious.

But even really good players have to make an adjustment or two.

Dillard spent one season at Oxford, transferring from Briarcrest Christian School in Memphis to add to a roster already overflowing with talent as one of the top high school catchers in the nation while adding a fourth Ole Miss signee to the everyday lineup.

His lone season in the blue and gold eventually became one to remember.

A power-hitting switch hitter with better-than-advertised athleticism, Dillard lived up to both the outside and personal expectations, leading an Oxford offense that scored nearly seven runs a game with a .438 average. Regularly manning the No. 3 spot in the order, Dillard racked up an area-best 49 RBIs and did so while exhibiting an advanced approach against teams that didn’t always want to give in to his power stroke. The 6-foot, 220-pound Dillard walked 37 times against just 17 strikeouts, which helped him post a .590 on-base percentage.

Dillard tormented teams with the long ball anyway as he swatted a nation-best 16 home runs, the last coming in walk-off fashion against Hattiesburg in the MHSAA Class 5A title-clinching win to help deliver Oxford’s first-ever back-to-back championships. More than half of his 42 hits went for extra bases — he added five doubles and four triples — as he finished with a 1.072 slugging percentage and a whopping 1.663 OPS. He stole 17 bases for good measure, producing the kind of balanced season that’s made him this year’s EAGLE Baseball Player of the Year.

“It was my favorite high school season I’ve ever been a part of,” Dillard said.

Yet it wasn’t always easy this season for Dillard, who will remain teammates with Jason Barber, Houston Roth and Grae Kessinger at Ole Miss next season.

With teams trying to stay out of Dillard’s wheelhouse, it was common for Dillard to see pitchers nibbling on the outer part of the plate, which jived with the approach he usually takes to go with the pitch and pepper the opposite field.

But the one-sided approach hindered Dillard’s ability to make pitchers pay for mistakes on the inside. After hitting .305 with just two homers through the first 11 games, Dillard made a change.

“Anything that was off the plate inside, I couldn’t really do much with and I was just late on a lot of stuff,” Dillard said. “I couldn’t really get my arms extended and put a charge in any of the balls. But I think changing that approach to look up the middle, I could still get to the ball inside and I could still get to the ball outside, so I just hit it wherever it was pitched. Looking up the middle really helped me a lot.”

Dillard hit safely in 10 of the next 11 games and went through a stretch where he belted seven home runs in six games. He caught fire in the postseason, hitting .688 with 15 RBIs in nine playoff games, including a three-homer game in a series-clinching win over Center Hill.

“It’s easier to hit when you’ve got Grae and Drew Bianco in front of you getting on base and you’ve got Jason and Houston behind you,” Dillard said. “But I felt a lot more comfortable I guess in the middle of the year toward the end of the year. I was kind of hot. I think I was really comfortable, so just changing my approach really helped me do what I was supposed to do for this team.”

It culminated in an ending that was almost too good to be true. Almost.

“Fifteen home runs on the year, and he hits one to end it and his high school career? You can’t write that,” Baughman said. “You can’t draw that up any better.”

Oxford
Joining Dillard on this year’s team from Oxford are Barber, Roth, Kessinger and Bianco.

It’s the second All-Area honor for Kessinger in as many seasons and third straight for Barber and Roth, who combined to once again form arguably the state’s top 1-2 punch on the mound. Roth went 10-0 in his final high school season with a 0.44 earned run average, turning in a complete game in all but two of his nine starts while allowing just 33 hits and striking out 111 in 63 innings.

Kessinger hit .310 out of the leadoff spot with 10 doubles, three home runs and 15 RBIs and led the Chargers with 20 stolen bases. Kessinger, a 26th-round selection of the San Diego Padres in this year’s MLB Draft, was even better with the glove, committing just three errors as the everyday shortstop.

Bianco, a sophomore second baseman, hit at a .312 clip, knocked in 24 runs, tied for the team lead with 11 doubles and finished second with six home runs. Already committed to LSU, Bianco posted a .998 OPS and swiped 13 bases in 14 attempts.

Lafayette
Representing Lafayette on this year’s team are Mack Bishop, Will Cullen and Tyler Williams.

Bishop was once again a key cog in helping the Commodores reach the MHSAA Class 4A playoffs, earning All-Area honors for the second straight year after putting together an equally strong season on the mound and at the plate. The senior left-hander went 3-1 with a 3.08 ERA in eight starts, allowing 38 hits and striking out 51 in 47 2/3 innings.

But Bishop provided himself and the rest of Lafayette’s pitchers with plenty of support as the Commodores’ top hitter, batting .392 with a .940 OPS. He had three doubles, a triple and 12 RBIs.

Cullen, the Commodores’ everyday second baseman, followed Bishop with a .373 average and tied for the team lead with 22 hits. The senior finished with four doubles, a triple and 10 RBIs.

Williams, a junior center fielder, matched Cullen’s 22 hits to post a .349 average, drove in a team-high 16 runs, led the Commodores’ regulars with a .461 on-base percentage and was second with 18 runs scored. The Mississippi State football commit was also solid defensively, posting a .909 fielding percentage.

Water Valley
Water Valley is represented by a trio of seniors in Cooper Clement, Brian Willhite and Donovan Gaston as well as junior Kenny Goolsby.

Clement gets the nod for the second consecutive year with a strong season of dual responsibilities. Alternating between being the Blue Devils’ ace and everyday shortstop, Clement posted a 1.43 ERA and tossed four complete games in seven starts with 73 strikeouts and just 17 walks in 53 2/3 innings. The East Central Community College signee was also Water Valley’s top hitter among the regulars with a .443 average, tying for the team lead in hits (35) while driving in 18 runs and stealing 11 bases in 12 attempts.

Goolsby, who joined Willhite in the outfield, hit .343 with 12 RBIs and six doubles, second-most on the team. The southpaw was also one of the Blue Devils’ top arms, posting a 3.25 ERA in 32 1/3 innings.