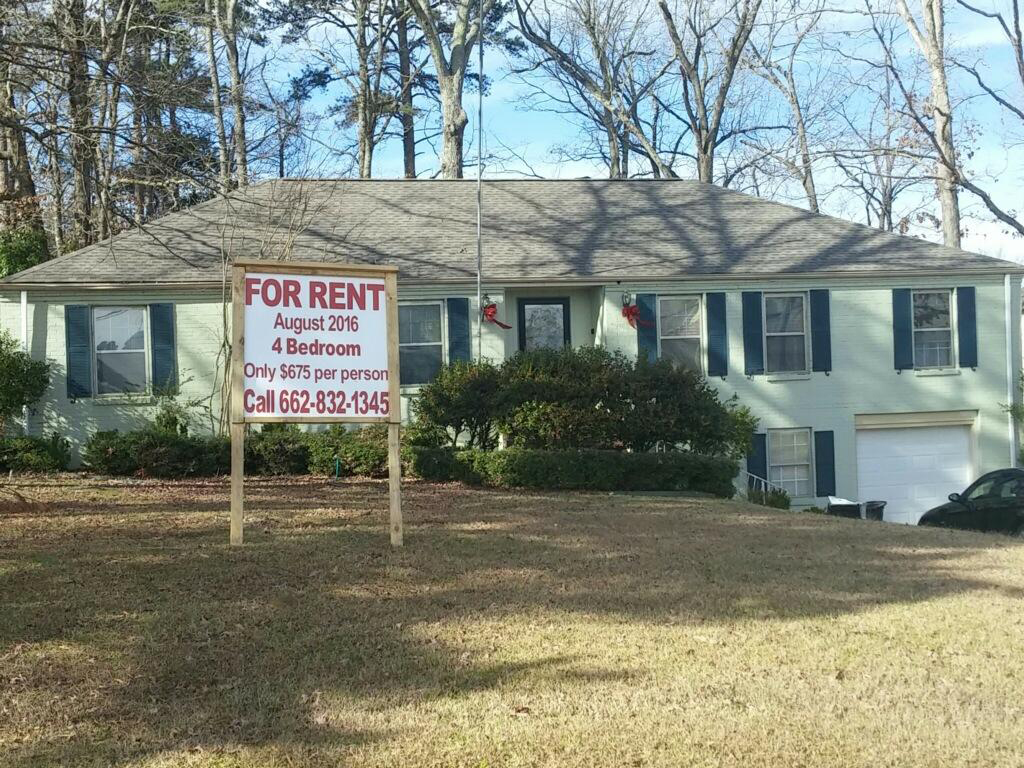 Ole Miss Rebel fans pour into Oxford whenever there’s a home game. Many stay at local hotels, while others rent houses, condos or apartments for as much $5,000 for a weekend. For those who can afford that kind of luxury, there are plenty of places to choose from for a weekend stay.

As the University of Mississippi continues to grow, more and more student-housing developments have been built in Oxford, giving most students an abundance of choices when it comes to finding an apartment. Most rent by the bedroom space and three to four students share the rest of the house.

When it comes to finding a place to rent for families, retirees, and even students who can’t afford $600 for a bedroom, however,  the choices are not so plentiful.

A search on the real estate website Zillow shows only two apartments or duplexes for rent in Oxford under $900 a month. However, page after page shows plenty of rental units for $1,500 and up.

According to a rent calculator on Rentlingo.com, someone who makes $30,000 a year should spend no more than $800 a month on rent. Someone making $15,000, which is about what someone working full time at minimum wage makes a year, should only spend $420 a month in rent.

While there seems to be plenty of places to rent for weekend visitors to stay while in Oxford, students and the professionals who can afford $2,000 a month in rent, the backbone of the Oxford community —  restaurant workers,  bank tellers,  garbage collectors, law enforcement, construction workers — have few options for places to rent and many are living outside of Oxford, and Lafayette County, and commuting to work.Even buying a home in Oxford has become harder for most families as prices for single-family homes are seldom below $200,000 inside the city limits.

The problem is not one saved for those earning minimum wage. Middle-class families seem to be having a hard time finding acceptable, livable affordable rental units to live in.

Melissa French, an Oxford resident, says the rental market in Oxford is geared toward students — so much so, that’s hard to find a lease that isn’t from August through July. She and her family pay $2,000 a month for their home. They’re new to Oxford, moving recently from Texas. They make a decent living, she says, but aren’t currently in the position to buy a home while supporting three young children.

“Finding a home to rent that’s in town, so our children could go to Oxford’s schools in a safe, desirable neighborhood, was very difficult,” she said.

Paying $2,000 a month for rent is becoming a challenge, she said, but she has had a hard time finding another home for less money that fits her family’s needs.

“If we’re having a hard time, I can only imagine what’s it’s like for people earning workforce wages,” she said. “With the construction boom, more and more laborers are coming here to work, but they can’t find a place to live.”

“They don’t have to,” she said. “They don’t advertise on the internet. They may post a sign out front so you have to drive around town looking for places to rent. It’s often who you know as well.”

“Do we stay in Oxford and get the lifestyle we adore or do we move somewhere more affordable?” she said.

Liv Draper moved from Colorado recently to be closer to family. She got a part-time job at a local restaurant earning minimum wage. She’s single but isn’t a student. She makes $300 every two weeks. Because she doesn’t have children, she generally doesn’t meet the criteria for housing assistance. She is living with family right now but knows if that arrangement should come to end, she could be homeless.

Nickie Pritchard grew up in Oxford, as did her fiance’. Her grandparents moved to Oxford from Georgia many years ago to run the Malco and the Rebel Drive-In theaters. She now lives in Pontotoc because she couldn’t find affordable housing in Oxford.

“It’s a shame really,” she said. “My fiance’ has to commute to work in Oxford every day. We have to travel for the boys’ doctor’s appointments because we use the doctor who delivered them. I would love for them to be able to attend Lafayette (schools) like their father and I did, but I don’t foresee that happening. We are a normal family who can’t afford to pay $1,200 a month in rent. It’s tragic.”

Relief on the horizon?

The city has been actively working on updating its comprehensive plan, dubbed Vision 2037. She said Wednesday the planning department is working toward having the plan presented for approval later this summer.

“The plan has several suggestions on how to increase affordable, or workforce housing,” she said.

A chart in the back portion of the 137-page document shows suggestions and goals and suggested ways to implement them, as well as how they are ranked as priorities and a suggested time-frame to address the issues.

A No. 1 priority suggestion was to considering the need and financing opportunities for infrastructure, parking and other requirements for workforce housing increased the inventory of workforce housing and it is suggested to be implemented in the near future.

Several No. 2 and 3 priority suggestions dealing with housing include: identify locations for affordable/senior housing developments; provide density bonus for those developments which include affordable housing units; establish a housing trust fund; link regional transit with affordable neighborhoods and mixed-use nodes; promote increased private lending for workforce housing; and developing incentives for the creation of workforce housing.

On the House for Sale/Rent Oxford MS Facebook page, members of the group were asked if they had run into issues finding affordable rents in Oxford. Within three days, about 150 people responded with various stories that all had a common response — it’s hard to find affordable residential rentals in decent neighborhoods in Oxford.

Brandi Jenkins was surprised, and a bit relieved by the responses she read on the Facebook page.

“And here I thought I was the only one that had an issue with finding affordable housing,” she said. “As a single parent, tough doesn’t even begin to describe the battle.”

estimate How much house you can qualify for…

* Data was determined by using a local mortgage lender’s online affordability calculator and using an average of properties’ real estate taxes, homeowners insurance, with a homestead exemption, 0 percent down payment and a 29 percent potential house payment, with total debt not exceeding 41 percent of monthly gross