No deal on tennis courts 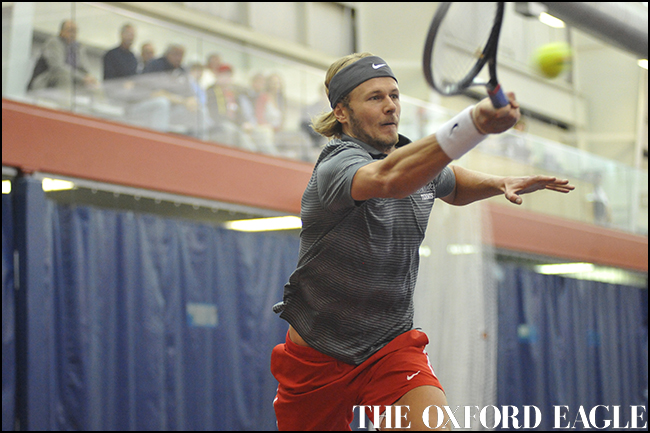 Ole Miss' Nik Scholtz returns a shot against Troy's Hassan Ndayishimye in men's college tennis at the Gillom Center in Oxford, Miss. on Monday, February 9, 2015. Plans for the city of Oxford and Ole Miss to partner on building a six-court indoor tennis facility near the Oxford Activity Center have broken down and Ole Miss will now build an indoor tennis facility on campus.

Plans for the city of Oxford and the University of Mississippi to partner on building  a six-court indoor tennis facility on the Oxford Activity Center campus have fallen to the wayside.

The two entities had been discussing sharing the costs of building and management of the proposed indoor facility for several months. Preliminary architectural drawings were drawn up and presented to city leaders for review in February.

However, talks halted recently with the city and university having a hard time coming together to agree on the usage of the facility.

Mayor Pat Patterson said Friday the two sides talked extensively but in the end, they couldn’t work out their differences.

The original plan had the university paying for the construction of the facility on city-owned property and the city would maintain and manage the courts.

The university’s tennis team would have had priority to use the courts, but when not in use the city wanted the courts open to the community and used by other organizations.

The indoor facility would have been built on the Activity Center campus and possibly be part of the plans for a new or expanded activity center.

UM Athletic Director Ross Bjork said the university and city have enjoyed a great relationship with Patterson and all city officials and look forward to working together in the future on other possible projects that would benefit the city and university.

“When we approached the city last year about an indoor tennis facility we had every intention of seeing the project become reality and so did the city,” he said. “As we looked at the daily use and operational scope of the project, the needs of our intercollegiate tennis program and the needs of the city for more indoor recreational space did not line up.”

Bjork said the university decided it would be “in everyone’s best interest” to build the indoor tennis facility on university property.

“We are working on a specific location as we speak and hope we can move forward on this project later in the calendar year,” he said Friday.

Oxford Park Commission Director Seth Gaines said the university’s decision to back out of the indoor tennis facility does not affect any design plans for a new activity center since OPC has not yet gotten that far along with the project. Gaines said he hopes to start the design process within the next couple of months.

“What it does do is potentially change the layout and the site of the new activities center,” he said.

Gaines said he did not anticipate having indoor tennis courts in the new activity center; however, nothing is off the table at this point.

“We have not ruled anything out for the new Activity Center,” he said. “ … We will design and see how much money we have to build before we confirm what will be at the new facility.”