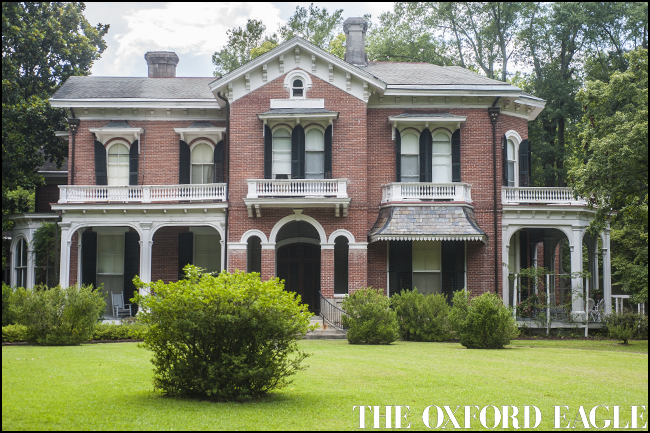 The Ammadelle mansion has been a part of Oxford’s history since 1859, beloved by its residents and visitors alike. A true representation of a Southern mansion, it has been home to the Tatum family since 1961.

Earlier this month, it became home to another Oxford family.

According to land records, the closing on the North Lamar Boulevard home occurred on June 3 and was sold to Mac and Elizabeth Monteith.

Dorothy Tatum lived in the home until she died in August 2015. It has been vacant since.

Dave Tatum, Dorothy’s son, said it will be nice to see young children in the home again.

“We’re real happy with the family who bought it,” he said Monday. “It’s going to be a home and lived in. It won’t be subdivided (for rentals) or anything like that.”

The Tatum family purchased the home from David Neilson, who owned Neilson’s Department Store. It was designed by Calvert Vaux, in an Italianate villa style. Vaux, a well-known architect, worked for Frederick Law Olmsted, who had been called the father of American landscape architecture. Vaux was his senior partner.

The home sits on about 7 acres and is part of the Ammadelle subdivision which includes about 50 or so homes in the neighborhood behind it. The Monteiths owned a home in the subdivision on Sivley Place, which is currently up for sale.

Mac Monteith is a local developer who owns Oxford Creek subdivision and has been involved with a couple of proposed commercial and residential developments on North Lamar. The Monteiths could not be reached for comment Monday.

The price paid for the home is not listed on the deed as Mississippi is a non-disclosure state and prices remain confidential.

The home has five bedrooms and four bathrooms and is approximately 8,000 square feet with 14-foot ceilings on the ground and second floor.

The home was declared a National Historic Landmark in 1974. Because of that designation, the house cannot be modified on the exterior and the land cannot be subdivided. There is a conservation and preservation easement on the house.

The historic home served as a model for the Benbow house in William Faulkner’s novel “Sartoris.”

It also was featured in the 1950s MGM movie “Home from the Hill,” filmed in Oxford.