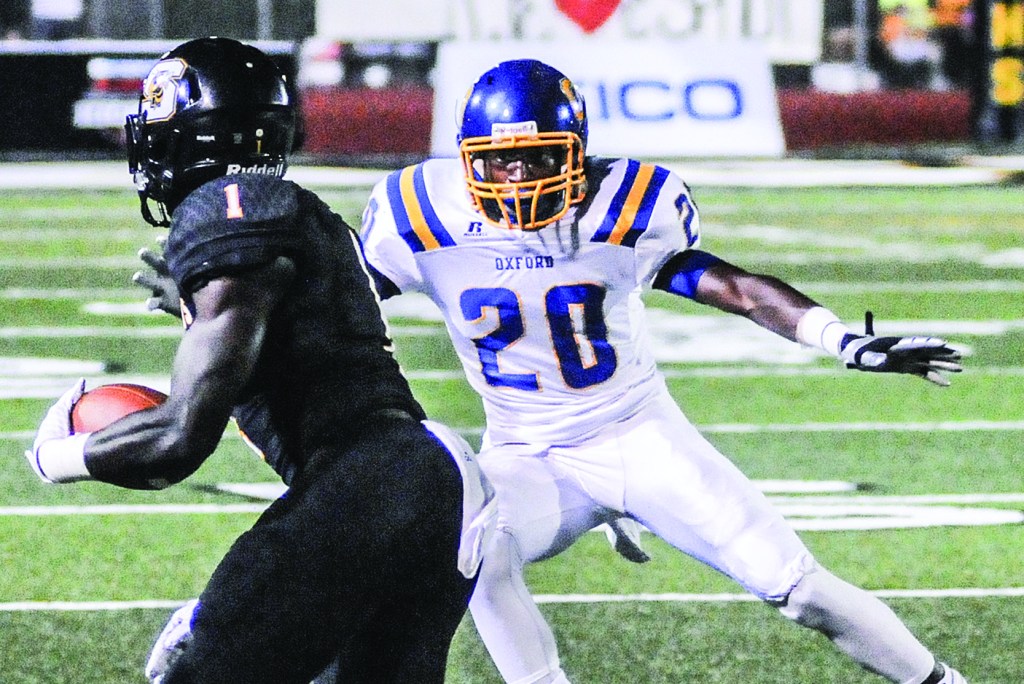 Oxford safety D.Q. Thomas (20) is one of the many area players who will be attending this year's Southern Elite Combine on Wednesday at the Oxford-Lafayette Sportsplex. (Davis Potter)

For the fifth straight year, Oxford will be home to one of the nation’s fastest-growing events for high school football players to get exposure for the next level.

Approximately 200 players across the country are expected to take part in the annual Southern Elite Combine at the Oxford-Lafayette Sportsplex on Wednesday. The event will begin at 1 p.m. with players going through position drills and game-like situations in an effort to raise their profiles for prospective colleges.

When David Johnson, publisher and recruiting analyst for Rebels247, Ole Miss’ 247Sports affiliate, and former Ole Miss offensive lineman Terrence Metcalf created the event in 2012, the intent was to give players in north Mississippi a chance to be seen. But the combine instantly attracted some of the nation’s top players and has grown to the point where more participants are coming from outside the state than in it, Johnson said.

“I think that can be attributed to the quality of players that have come through it over the course of the years,” Johnson said. “There are a lot of guys who have attended this combine that are on (Southeastern Conference) rosters now.”

The invitation-only camp drew more than 230 players last year, a number Johnson said he’s not sure will be topped this year, but Tennessee, Louisiana, South Carolina and Oklahoma are just some of the states that will be represented in addition to Mississippi. The combine MVP each year — Tennessee running back Jalen Hurd in 2012, Alabama receiver Cameron Sims in 2013, Memphis running back Darrell Henderson in 2014 and Ole Miss quarterback Shea Patterson in 2015 — has gone on to sign with an FBS school.

The combine will also feature prospects from the 2018, 2019 and 2020 classes, which Johnson believes is one of the combine’s highlights. Getting an early look at some of the younger prospects such as Palmetto (South Carolina) freshman quarterback Blair Garner could help Johnson and other analysts find the next big thing in recruiting before anyone else.

“It’s kind of fun to see those guys when nobody knows who they are and be able to identify them early,” Johnson said.

Local flavor
Rockette isn’t the only player from the area who will take part in the combine.

His secondary mate, rising senior safety D.Q. Thomas, as well as linebackers Jaquanzi Johnson and Quentin Wilfawn are among those who are scheduled to participate from Oxford. Thomas already has a handful of FBS offers, including Mississippi State.

Despite the increased nationwide draw the combine has received, Embry said he’s glad such an event is held locally in order to give players in the area who might not otherwise get exposure a chance to be seen.

“I would say it would be difficult,” Embry said. “I can’t speak for anyone specifically, but you know you have some kids that can drive that 30 minutes or one hour that would not be able to drive to Atlanta or Dallas or places like that for an event of this magnitude.

“I guess it’s kind of a break from the norm. Several years ago, kids from Mississippi were having to drive a long way to get this kind of look. It’s a great event.”