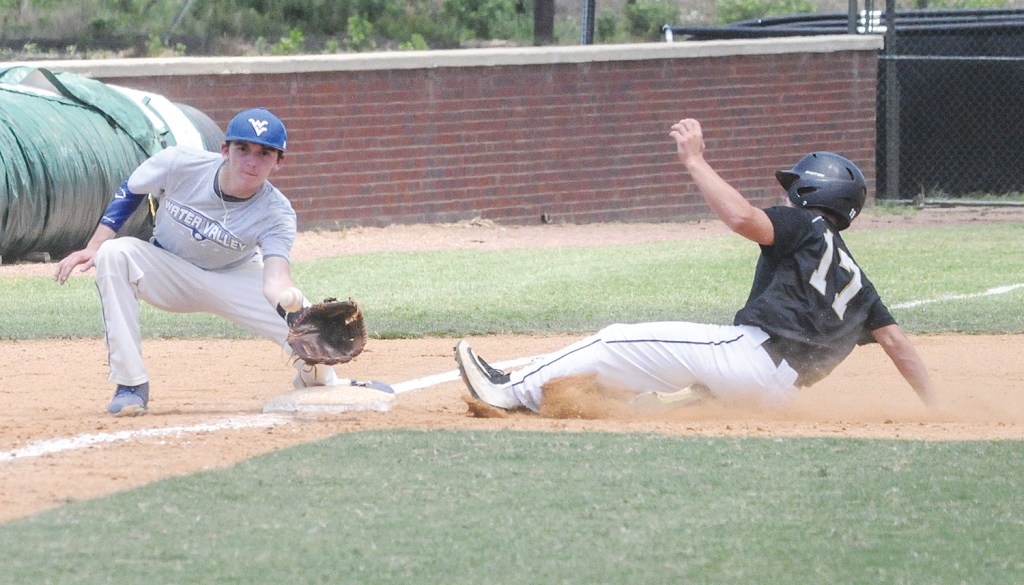 NEW ALBANY — Thanks to heavy rain in the area Monday evening, Water Valley’s stay in the Northeast Mississippi Coaches Association for Better Baseball (NEMCABB) tournament was extended a day.

That was as far as the Blue Devils will go.

Amory eliminated the Blue Devils in the first round with a 6-2 win in five innings Tuesday at the New Albany Sportsplex. The contest was not a pitcher’s duel by any means as the first inning saw both starters struggle, causing a near 30-minute first frame.

Amory starter Ryan Morgan could not record an out before exiting the game. Morgan walked the first four Blue Devil batters he faced, giving Water Valley a 1-0 lead early. Shortstop John Williams relieved Morgan and gave up another run before getting the Tigers out of the jam but trailing Water Valley 2-0.

It was not much better for Water Valley’s Chapel Hyde. The sophomore right-hander issued two walks and hit two Amory batters, leading to the Tigers to score three runs and grab 3-2 lead after the first inning.

The right-hander stayed in the game, working 2 2/3 innings and recording one strikeout before being relieved by ninth-grader Austin Yeager, who closed out the game.

“It comes from guys still learning how to pitch a bit,” Water Valley coach Jeb Lee said. “Chapel Hyde, it’s been a big summer for him. He’s thrown well all summer and he’s coming off a week of vacation and just didn’t have his best stuff early. Austin Yeager is a young kid who’s learning how to pitch as well. He came in and was a little rough in the beginning, but he got better.”

For Amory, it was a case of two big innings. After plating three in the opening frame, the Tigers added three more runs in the third inning for the winning margin.

The two runs were all Water Valley could get from the Amory staff as Williams steadied the ship and held the Blue Devils to three hits.

“It’s hard to get into a rhythm offensively or defensively when those things happen,” Lee said of the first-inning struggles from both teams.

Water Valley went 0-4 during the NEMCABB tournament, losing all three games during last week’s Region 8 pool play in Grenada. It is the first month that Lee has been the official head coach of the Blue Devils and the scoreboard may not have reflected it, but progress was made by his young team. Experience was gained, playing games against the MHSAA Class 5A North Half finalists and eventual state champion in Grenada and Oxford.

“We played four really good teams, and it hit us at a time when we have probably more guys out than any other time of the year,” Lee said. “But we don’t make excuses. We show up with who’s going to be here and we play hard. The proud thing is these guys competed every game.”

The summer season will conclude for Water Valley as the Blue Devils wrap things up with a game at Senatobia on Thursday.