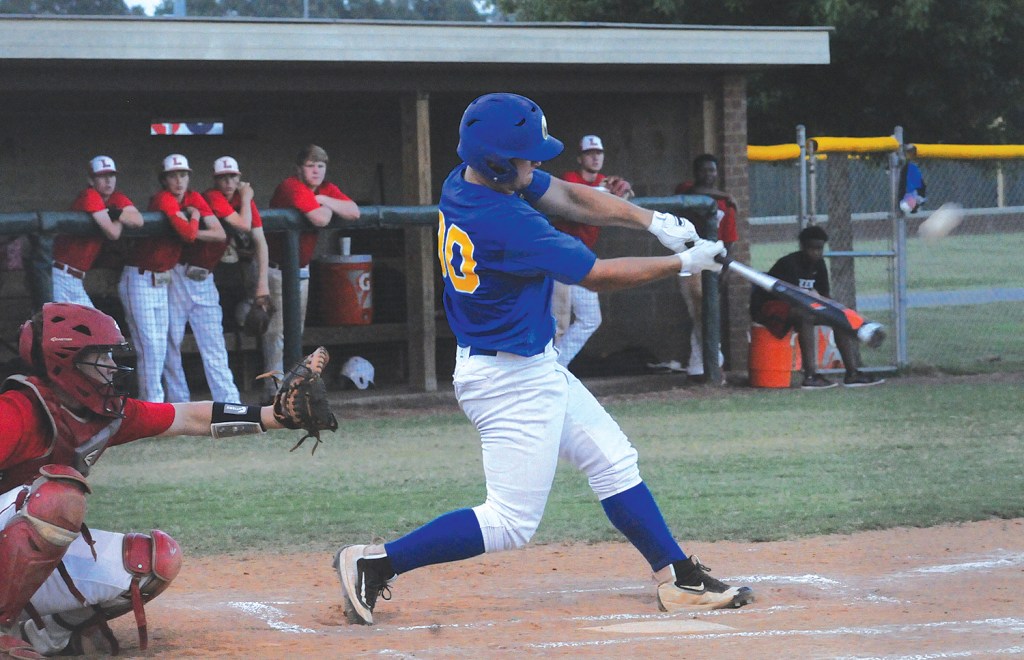 Oxford’s Drew Bianco connects on a pitch during the first inning of a NEMCABB tournament game against Lafayette on Tuesday in New Albany. The Chargers won 13-2 for their first tournament win in three years, advancing to today’s quarterfinals. (Jake Thompson)

NEW ALBANY — Oxford has accomplished a lot the past two years on the baseball diamond from winning back-to-back state championships to a perfect regular season.

The Chargers can cross another box off the list after Tuesday.

For the first time in three years, Oxford won a game in the elimination portion of the Northeast Mississippi Coaches Association for Better Baseball (NEMCABB) tournament with a 13-2 victory in five innings over crosstown rival Lafayette at the New Albany Sportsplex.

The Chargers advanced to the quarterfinals where they will play at 4 p.m. today. Oxford will take on the winner of the Kossuth-Caledonia second-round matchup, which will be played at noon.

“I don’t know that it’s a good thing that we won,” Oxford coach Chris Baughman said. “Drew (Bianco) caught me before we left and said, ‘Should we lose?’ Because we’ve lost the last two years in the first game and then won two state championships.”

Lafayette jumped out to an early 1-0 lead after the first frame as Charger starter Reed Markle was shaky to begin the game. It was the only run the Commodores would record early after being unable to take advantage of the limited number of baserunners Markle put on. Lafayette was able to add another run in the fifth.

“I said, ‘Here’s the thing guys, you had your chance to get (Markle) the first and second inning,’” Lafayette coach Greg Lewis said. “Had two great chances to open it up and take control of the game. I said, ‘You didn’t, they did.’”

After a shaky beginning to his outing, Markle righted himself and pitched a complete game, saving arms for Oxford, which could potentially play three more games between today and Thursday. The right-hander gave up three hits and struck out five Commodore batters. He walked three, two of them in the fifth where his command wavered, throwing 10 balls in his first 11 pitches to start the frame.

“Obviously when we got up, trying to save a little bit of pitching,” Baughman said of keeping Markle in the entire game. “I thought he did a tremendous job of having two potentially bad innings and then locking back in and minimizing and getting out of it.”

In the other dugout, there was not the same success to be had on the mound. Lafayette starter Corey Taylor was not long for the game, giving up three runs in the second inning as Oxford took a 3-1 lead and did not relinquish it. Five Lafayette pitchers took the mound in what was its final game of the summer campaign, giving up 13 runs on seven hits, two for extra bases.