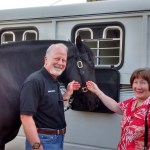 Joanne and Mark Wilkinson meet one of the mounted patrol horses 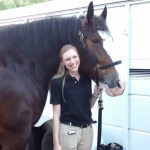 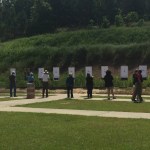 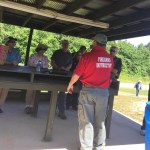 Final briefing by Capt. Phillip Zampella before we go on the range.

My husband and I, along with a dozen other people, have just completed the Oxford Police Citizens Academy. The program consists of 10 classes covering a wide range of topics from how the police handle traffic stops to the honor guard.

The classes are aimed at showing every aspect of what a police officer needs to know, what they deal with, and why they do things a certain way.

We have been cleared to do a ride-along with a cop, which really provides a firsthand look at what an officer does on a routine basis.

At every class we have met police officers that are completely dedicated to their jobs and to serving the community. The OPD recently renewed its accreditation with the state of Mississippi and it is one of only 27 police departments in Mississippi to have that distinction.

Chief Joey East wants the police department to serve the community. He is very proactive and authorizes an impressive list of community outreach programs to make the department a very approachable and visible part of our community.

Some of the programs include the citizens academy, coffee with a cop, their open house/fun day, a haunted house at Halloween, bingo at the retirement homes, DUI and distracted driver training, and they even hand out Popsicles to good drivers on hot summer days.

We heard a dramatic story about a shootout that happened when an officer responded to a loud party complaint. The officer walked to the building in question, saw a man walking rapidly away, and requested that the man stop so that the officer could ask him a few questions. What the officer did not know was that the man he was attempting to stop had just shot his own father, and had a prior history of violent action. The suspect pulled out his gun and shot the officer. Three shots were exchanged from both the officer and the suspect. What amazed me is that even though the officer was badly wounded, he did not use any more force than was required to immobilize the suspect.

Traffic stops can be one of the most dangerous parts of an officer’s job. The person being stopped knows what their actions or intentions are going to be, but the officer has to approach carefully, anticipating any outcome.

During a simulated traffic stop a member of our class approached the stopped car. As soon as they were abreast of the driver’s window, the driver pulled a pretend gun to show just how quickly events can unfold. The statement was made, “action is faster than reaction,” and we saw that for ourselves. The police are trained to understand and follow the Constitution and State criminal law. They are not going to stop you unless they have probable cause.

We were told a story of an officer who could have used deadly force, but refrained, was injured himself, and eventually was thanked by the young man who had been high on drugs and violent at the time of his arrest.

Driving under the influence of either alcohol and/or drugs is a big problem in Oxford. In 2015, the OPD made 697 DUI arrests. The officers are well-trained in dealing with this problem and the OPD has the top field sobriety program in Mississippi.

An officer from the narcotics division told us that the OPD works in conjunction with the University Police and the Sheriff’s Department to combat illegal drug use in the community. Marijuana and pills are the two top drugs they find, but they are seeing an increase in the use of heroin and synthetic drugs.

We were also told about scams that have become increasingly common.

The advice is to safeguard your sensitive information, never give personal details over the phone, and beware of any suspicious links on the internet.

We spent one Saturday morning learning about firearm safety. Our instructors were two highly trained police officers that do firearms training for the state and for the federal government.

We were taken to the firing range where we were able to fire standard-issued police pistols. The instructors were very professional, stressing safety at all times and coaching us on the correct method of firing a pistol.

Another Saturday we learned about defensive driving techniques and were able to test our driving skills on a course set up for us at the airport. The officers also go through pursuit driver training and are very adept at handling their patrol cars.

Some police officers work as school resource officers (SRO’s) for the approximately 4,000 children who attend the Oxford City Schools. Not only do these officers ensure that the children are safe (lockdown procedures and drills) due to the need to protect against an “active shooter” situation, they also serve as an important role model.

The sergeant of the SRO’s told us about a child that was making poor decisions and associating with the wrong crowd, so he mentored the child. Years later, the student who was now an adult wearing an Air Force uniform, came up to the sergeant and thanked him for turning his life around.

The police department has implemented the D.A.R.E. program (Drug Abuse Resistance Program), as well as the “Straight Talk” program, to help ensure that children receive positive attention and to direct children toward a productive life.

Parents can rest assured that the police department protects the children of this community — not only from the possibility of an outside threat, but they also act as mentors and liaisons for other child-related services.

The code enforcement officer works tirelessly to enforce the city’s codes so that we all have a better place to live. He works to keep our city a cleaner more attractive place, and all the research suggests that a cleaner city is a safer one.

The OPD also is involved with the Oxford Housing Authority, which was formed in the 1960s to provide low-cost housing.

The OPD started a community policing program in 1989 to deal with drug-related crime and other problems. The program has been very successful and there are currently four officers assigned to the five public housing communities.

Dogs, horses and the SWAT Team

One highlight of the program was meeting the officers and horses of the mounted patrol, and also the K9 officers and one of their dogs.

We watched a couple of videos of the Square late at night with lots of people milling about, and it was amazing how effective the mounted police were in controlling the crowd.

The advantages of the horses are that their tall stature enables the officer to have a view over the top of a crowd, one mounted officer can do the work of 10 officers on foot, and the horses never run out of gas. The horses are also a great public relations asset and produce a beacon of goodwill for the city.

The K9 dogs are very well-trained to sniff out drugs and bombs. In one demonstration where a small package of marijuana had been placed in our classroom, the dog only took a few seconds to find the drugs. Another demonstration showed how quickly and how effectively a dog can take down a suspect if required.

When the dogs aren’t working, they love to play with tennis balls, so if you have any used ones please drop them off at the OPD.

For really serious situations several of the OPD officers are also members of the highly trained SWAT Team.

SWAT stands for special weapons and tactics. The first team started in California after the Watts riots in 1965, and there are now 1,000 teams all around the USA. There is a strict selection process to become a SWAT team member, so we are lucky to have a unit here in Oxford should we ever need them.

There are 10 full-time officers who volunteer to serve in the Honor Guard and they do this in addition to their regular duties. The motto of the honor guard is “To honor with dignity, to remember with respect.”

Our last class was our graduation party, and I know we all came away from the Citizens Police Academy with a better understanding of what our police officers do, renewed appreciation for how well-trained, dedicated and committed they are, and gratitude that we have such an excellent police department.

If you are interested in taking the next class it will be offered at the end of July. Applications to enroll in this free and very worthwhile class are available at the front office of the OPD on Molly Barr.