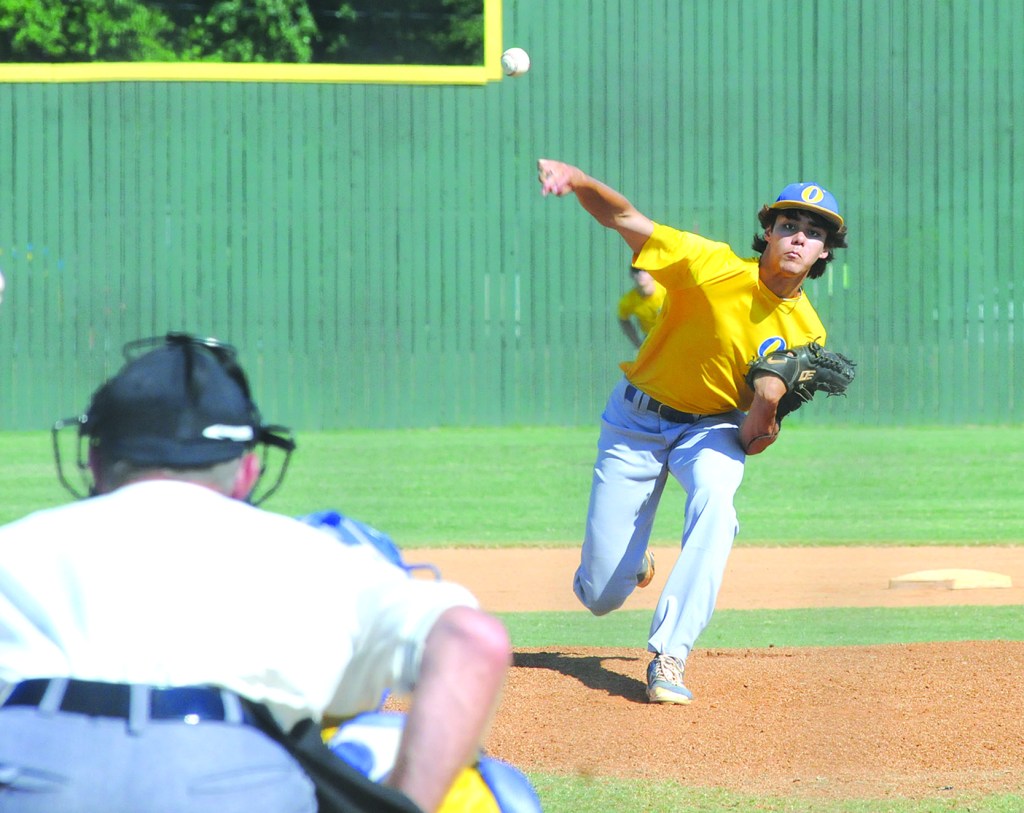 Oxford’s Carson Stinnett pitches against Caledonia in the first inning of a NEMCABB tournament game Wednesday in New Albany. The Chargers won 8-1 to advance to the semifinals today against Houston. (Jake Thompson)

NEW ALBANY — The past two years, Oxford has never made it past the first round. This year, the Chargers find themselves two wins away from yet another championship.

Oxford defeated Caledonia, 8-1, in the quarterfinals of the Northeast Mississippi Coaches Association for Better Baseball (NEMCABB) tournament Wednesday at the New Albany Sportsplex. The win advanced the Chargers to the semifinals where they play Houston at noon today. The winner of that game will challenge the winner of the second semifinal matchup between Amory and New Hope for the tournament championship at 2 p.m.

“I don’t know what that feels like,” Oxford coach Chris Baughman said of making it to the final day.

It was another combination of strong starting pitching mixed with an offense that took advantage of mistakes and put the ball in play constantly. Oxford scored eight runs on eight hits and capitalized off of three Caledonia errors.

Due to pitching over the weekend with his summer travel league team, Carson Stinnett’s start in the NEMCABB tournament was pushed back a day. The extra rest may have helped as the right-hander was lights out, pitching a complete game. Stinnett gave up one run — in the third inning — on five hits but shut down the Confederates the other six innings, striking out six and walking two Caledonia batters.

Much like Reed Markle had to Tuesday night against Lafayette, Stinnett worked around a couple jams, keeping Caledonia from getting back into the game and minimizing damage. Stinnett worked around runners in scoring position in the third, fourth and fifth innings, including fighting off two errors in the third, which the Confederates did capitalize off one for the lone run.

“We played real well,” Baughman said. “Carson did a real good job and saved some pitching for us (today). He walked a couple more than he usually does and had to pitch his way out of a couple jams. He kept his pitch count down for a seven-inning ballgame.”

Oxford scored runs in every inning but the first, where they went three up, three down. After scoring a run in the second, Oxford plated two runs in the third, fourth, fifth and sixth frames. Duncan Graeber went 3-for-3 at the plate, including a hit by pitch, two singles, a double, two runs scored and three runs batted in. Drew Bianco went 1-for-3, was also hit by a pitch and scored two runs. Stinnett helped his own cause with a double and a triple and scored two runs.

“I was real proud of the way we hit the ball,” Baughman said. “We hit a couple line drives, and I’m just real proud of us at the plate right now.”