More bang for your buck 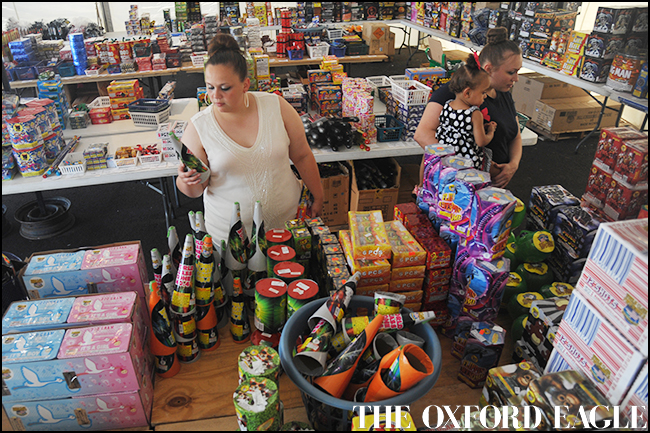 Kaila Jones, from left, Laya Black, and Kasie Jones look over fireworks at a Crazy Rob's fireworks stand on Highway 30, in Oxford, Miss. on Wednesday, June 29, 2016.

Fireworks might be patriotic fun, but they can also be expensive. To stop the holiday from draining your wallet, many firework stands are offering deals to help customers save money.

The appearance of firework tents around town announces the Fourth of July is coming soon. This year there are several locations in Lafayette County where you can find fireworks, including one on Highway 6 west of Oxford, Fireworks City, and one off Highway 30, Crazy Rob’s Fireworks.

At Fireworks City, customers can get five of the smaller types of fireworks free for the price of one. By giving away its fireworks in this deal, the company hopes to increase the amount of fun for its customers on budgets and teach children to be safe with fireworks.

“It’s the best way to train kids with fireworks because it’s less evasive and it teaches them how to stand at a distance,” Merameg Firework City Specialties Company tent manager Angela Waller said.

Types of fireworks that can be bought in this deal include roman candles, snappers, bottle rockets and snakes. The company also is having a buy-one, get-one free sale on larger fireworks such as Thunder Eagle, No Joke and Shock Wave.

The company will give buyers points to go toward more fireworks for every product they purchase.

This year’s new products in Firework City include Torpedo, an “adult version” of the snapper, which has a louder snap. Liberty Salute is also a new firework featured this year that offers a beautiful and surprising finale.

There are a lot of things to take into account when buying fireworks. Fireworks come in a variety of shapes, colors and explosions; from the small sparklers, to the louder finales. To make sure you’re getting what you want, it’s good to talk with the people in charge to get a description of each firework.

“I really enjoy selling fireworks,” Crazy Rob’s Fireworks manager Chey Moore said. “It’s a lot of fun when the small children come up to me and call me the fireworks lady.”

At Crazy Rob’s Fireworks, some of the large 500g firework cakes used for finales can be bought at half price. Some rockets are also on sale with buy one, get one free.

Whether you buy them for your kids or for old time’s sake, fireworks offer users a chance to have fun.

“It’s just something we do,” said mother of two, Jessica Montz. “It’s been a tradition in our family. We do it every July Fourth.”