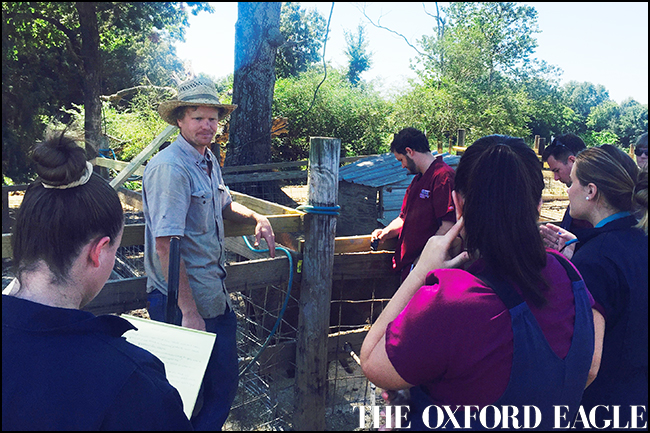 Reid Posey Marshall Bartlett, co-founder and president of Home Place Pastures, leads a group of veterinary students from Mississippi State University on a tour of his farm.

After receiving his undergraduate degree from Dartmouth College and making a few stops including Montana and New Orleans, Marshall Bartlett decided it was time to come home to Como and the farm that’s been in his family for five generations, dating back to his great-great-grandfather’s purchase of the farm in 1870.

Although the farm had operated mainly as a traditional row crop farm, pumping out products like soybeans, cotton, and corn, Bartlett saw firsthand the difficulties that come with this brand of farming, ranging from something as simple as uncooperative weather to something broader like the economic disadvantages and restrictions faced by the farmer in the greater agricultural industry, and so he decided to try something different.

“We wanted to do something more sustainable, but that we also felt was viable economically that we could really do well with and do things a little differently,” Bartlett said.

Birth of a pig farm

In 2014, Bartlett purchased and raised his first group of feeder pigs, and Home Place Pastures was born.

Today, Bartlett continues to act as president of the farm, as its arsenal has expanded to include lamb and beef in addition to pork.

“Everything is raised outdoors, all-naturally,” he said. “We raise the feed here as much as we can.”

Although the farm started out buying feeder pigs from other pasture farms, Home Place decided to begin raising their own pigs from birth in order to get closer to the process and to be able to monitor the entire life cycle of their animals and ensure firsthand that they are treated to the farm’s high standards.

“We’re cradle to grave,” Bartlett explained. “From a marketing standpoint, it’s attractive to be able to say that we’re doing all of that.”

Bartlett also said that raising their own animals has enabled them to establish connections with consumers in a way that row crop farming wouldn’t have allowed them to do.

“We’re raising the animals in a way that we believe in ethically, in line with all of our environmental principles, and we also get to connect with the end consumers through these relationships with chefs and individuals,” he said. “They’re trying our product. It’s different, and it’s special. We’re very proud of it, it’s been raised by us, and that’s really exciting — the marketing side and just engaging with people over what we’re doing, instead of this sort of isolating commercial agriculture model that my dad had to deal with.”

These connections didn’t always come easily for Home Place, however. In addition to the general difficulties of breaking into markets and forging business connections, Bartlett said that the relative youth of himself and several others at the fledgling company has sometimes made it even more difficult to be taken seriously, particularly in an often crowded field of suppliers, and that they continue to tackle these hurdles with patience and determination.

“It just takes a lot of time, a lot of patience, and a lot of really hard work and believing in what you do,” Bartlett said. “The more good relationships you’re able to form, the more word-of-mouth goes around and you start to develop a brand and a reputation.”

The hard work of those at Home Place certainly seems to be paying off. In addition to their active connections in cities across the Southeast such as Memphis, Jackson, and New Orleans, Home Place has also forged relationships with several Oxford area businesses, including Snackbar, Oxford Smoke Shop, Oxford Canteen, and the recently opened Taylor restaurant Grit, combined with some off-and-on arrangements with other establishments, and they hope to continue to grow within the Oxford restaurant scene.

Bartlett did admit that they continue to face challenges in breaking into some markets because of restaurants’ established relationships with larger distributors that can typically offer products at lower prices.

“It’s frustrating for us because we’re doing exactly what a lot of chefs claim to care about — we’re delivering weekly, we’re delivering consistency,” he said. “If you raise animals this way, it’s more expensive. You just have to find the people that understand and are willing to work with you.”

Although working with a small farm like Home Place can lead to more work on the restaurants’ end in terms of preparing the meat, Bartlett pointed out that the exchange for this extra bit of work is an incredibly fresh, high-quality piece of meat.

Expansion in the works

Moving forward, the next big step for Home Place is the opening of their own USDA-approved facility that will enable them to slaughter and process their own products on the grounds of the farm, a move that Bartlett claims will benefit not only Home Place Pastures, but also other small farms around the region.

“Our animals will never have to leave the farm, and we can process for other small, sustainable farms that need this type of thing so they can reach the kind of markets that they need to reach because we’re going to be USDA-inspected, which means that you can cross state lines,” he said.

Right now, Home Place has to take their animals to Memphis to a slaughterhouse and later to a meat market to be cut, which Bartlett said prevents them from doing things like grinding, curing, and value-adding.

“It’s frustrating, when you spend all your time and effort raising this animal the way you want and make sure it’s ethically treated, and then you just back it up to some building and unload it, and you don’t know what happens before you pick it up,” he said. “We can ensure other farmers, because we understand as small sustainable farmers ourselves, that we are going to carry out your process of ethical treatment through to the very end.”

Bartlett pointed out that another challenge for the farm as it grows and possibly expands into other markets such as Nashville or Birmingham in the future is simply to handle their growth in a responsible, patient manner that will protect them from sacrificing their standards and quality as they try to increase their output.

One way Bartlett said that they are looking to grow responsibly in the future is by forging a network of small, sustainable farms across the region, cultivating a group of producers who use the same standards and ethics as Home Place. Bartlett said that they hope to buy animals from small producers at a premium price, and in exchange, these small farms will agree to allow Home Place to conduct farm inspections and keep records to ensure that they’re maintaining the high ethical standards of Home Place.

By forming this network of small farms centered on Home Place’s operations, Bartlett hopes to spread the rising culture of fresher, locally-sourced products, while also creating a healthy market for these types of small farms that will ultimately benefit local and state economies.

“We want to make this healthy, high-quality meat as accessible as we can,” Bartlett explained. “We also want to impact positively the economy of our state. Mississippi needs something like this going on, where we can really allow those dollars and economic impact to spread out through cultivating these producers, where we’re employing a lot of people here at the plant and at the farm, and just creating a viable business model that people can even copy elsewhere. That would be exciting for me. Competition is always a concern, but at the end of the day, we’re trying to promote this style of agriculture.”

Even though Home Place Pastures has been operational for only a little over two years now, the farm is already carving out a unique role for itself, particularly with the upcoming opening of their USDA facility, and it seems that Bartlett is intent on changing the game for his brand of agriculture around the region.

“We’re going to be the only USDA plant in the state doing lamb, beef, and pork for ourselves and for the public, and producing all of those things right here,” he said. “It’s really a unique, special thing to be happening in this region, and I think the more people that know about that and come interact with it, the more it will grow and the more everyone can support it and be a part of it. We can really build something unique up here in the Hill Country, and Oxford is going to be a big part of that because that’s our back yard and that’s our favorite place to do business.”