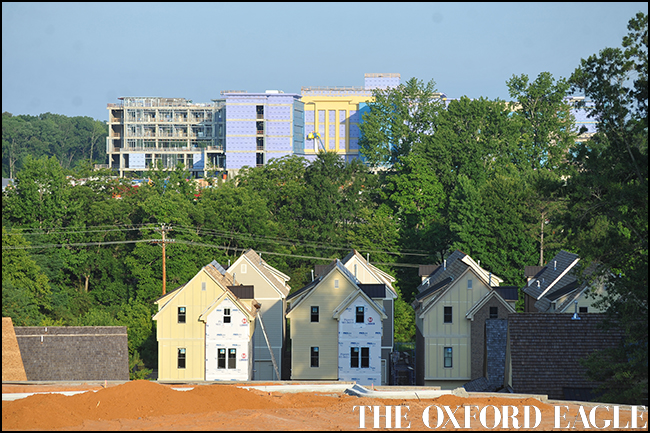 Land has been cleared for a hotel as construction of condos at the Hamlet and work on a new Baptist Memorial Hospital-North Mississippi continues in areas near South Lamar in Oxford, Miss. on Saturday, July 2, 2016.

South Lamar Boulevard has seen quite a boom in development in recent years and looks as though it will continue to see its fair share of growth in the near future.

City Planner Judy Daniel pointed out that development on South Lamar is overwhelmingly limited to the areas south of Highway 6.

“North of Highway 6, it’s going to stay nice houses that get nicer and nicer, but south of 6, what we have recommended in the plan, as far down as where the new road is coming in that goes to the (future location of the Baptist Memorial) hospital, is that traditional neighborhood corridor,” she said. “So it’s like moderate intensity. We haven’t scoped out what the zoning would be yet, but

The impending movement of Baptist Memorial Hospital from its current location on South Lamar to its new campus on Belk Boulevard is perhaps the largest consideration in picturing the future of South Lamar, according to Daniel.

“The big question is what’s going to happen to the old hospital?” she said. “We’ve got it designated for substantial amounts of future potential because it’s already built in and it’s got a parking garage. There are all kinds of things it could be, but you really can’t say much more until you know who’s going to buy it. What happens with it will probably guide anything else that comes along in there.”

Specifically, Daniel pointed out that the proximity of the hospital in the area will almost assuredly influence the types of developments that pop up around it, ranging from things like outpatient clinics and convalescence centers to the need for moderate-intensity residential areas, specifically for people like doctors and other medical staff who may keep a circuit schedule that keeps them going and coming on a periodic basis, but who also want to have a residence to live in while they’re working in Oxford.

However, one of the major business ventures that has already sprouted up in large part due to the opening of the new hospital is the Home2 Suites by Hilton, accompanied by the South Lamar Court development, a 30,000 square foot center devoted to retail, medical, and office spaces.

Senior Planner for the city of Oxford Ben Requet said that in addition to providing a place for hospital visitors to stay nearby, the new development will strengthen South Lamar by adding a number of restaurants, shops, and other services and possibly saving people a trip across town to the Square or Jackson Avenue in the process.

Coupled with the possibilities for a similar center across the street at the old hospital, Requet believes that these developments, which will operate side by side and share an intersection, could create a unique corridor for business that could provide a boost to the area.

Daniel said that moving south away from the hospital area, most of the development seems to be revolving around various types of residential areas, with some commercial and mixed-use developments sprinkled in.

Some of these residential areas include the newly constructed Hooper Hollow cottages and the Oxford Farms development, including Creekside Condos specifically, as Requet pointed out.

Daniel said that moving forward, you might see development moving further toward the intersection of South Lamar and Highway 7.

“As you go further south, it’s either developed or not very deep properties, and that’s all the way down to the intersection with the highway. Now, at some point, there’s already zoning for some kind of shopping right there at that intersection. I would say that it’s kind of what you see in that middle section of South Lamar and a potential for neighborhood, business-scale things.”

One other thing to look out for in the future is a possible new YMCA facility, which could move from its current location in the Mid-Town Shopping Center on North Lamar to a piece of donated land from Callicutt Farms on South Lamar.