Oxford’s Fourth of July events successful, albeit a bit damp 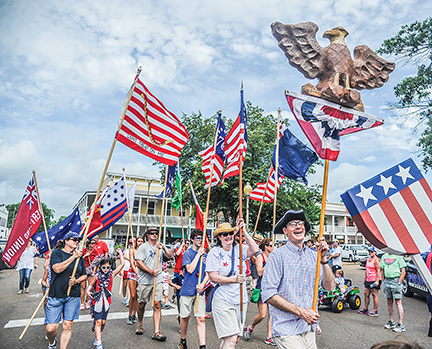 Jason Bouldin, right, carries an eagle as he leads those carrying Revolutionary War era flags during a 4th of July parade in Oxford, Miss. on Monday, July 4, 2016. (Bruce Newman, Oxford Eagle via AP)

Fourth of July events kicked off Monday on a healthy note, with more than 300 people taking part in the annual Fourth of July 5K and Family Fun runs.

Organizers made numbers for 250 people, but as registration progressed, they had to make more to accommodate the number of people signing up for the race.

Kristina Carlson didn’t win as far as crossing the finish line first, but completing the race was a huge win for her personally. Carlson recently battled cancer.

“After chemo, radiation and two surgeries, I’m just happy I crossed the finish line,” she said after the race.

Her son, Captain Alexander, ran the race for the first time as well. The two enjoyed the course and the strong breeze that helped cool things down Monday morning.

“The course wasn’t too hilly,” Captain said. “There were some gradual hills.”

After the 5K, moms, dads, kids and even some dogs, took part in the Family Fun Run, which was about a mile long, starting and ending at City Hall.

Local kids Noah and Joseph Garner said it was their first time doing the Fun Run.

A quick ceremony awarded the winners of the 5K race and then Oxonians gathered on the Square at 9:30 a.m. To watch the annual Fourth of July Children’s Parade. More than 200 children, and a few adults, participated in the parade, according to organizers.

Bicycles, scooters and wagons decorated in red, white and blue decorations with small riders rode around the Square.

Chase and Lark Smith travelled from Birmingham, Alabama to spend the Fourth of July with their grandparents. However, they took some time to decorate their scooters and be a part of the parade.

“My mom got the decorations for us,” said Chase, 7.

Fowler Staines decided to invite her friends and their children to ride on a big trailer that was decorated for the holiday. About 15 children and adults rode on her “float.”

“This is the first time we did this,” Staines said. “I just thought it would be fun to do this year, and have something festive in the parade.”

Stormy weather moved into the area around 6:30 p.m., cancelling some of the events scheduled to take place at the Grove. Children were able to bounce and pet animals for a couple of hours before the sky turned ominous. An Independence Day Ceremony and local music had to be cancelled.

However, despite the rain playing spoilsport during the early evening hours, the $15,000 fireworks show took off just nine minutes past the originally scheduled time of 9 p.m.

The turnout to see the fireworks was as it always is — plentiful, with hordes of people watching the show from inside the Oxford-University Stadium. Those who didn’t grab a seat inside for a $2 donation, found a place in and around the Grove.

“Remarkable,” is how Jay Jonson defined the evening. A resident of Oxford all his life, Johnson attends the fireworks show every year and participates in the festivities.

“It was indeed worth coming out in the rain,” Johnson said. “Every year we liking watching the fireworks from across the bridge. This time around we watched from the stadium, but we have no complaints.”

Mrudvi Bakshi contributed to this story.