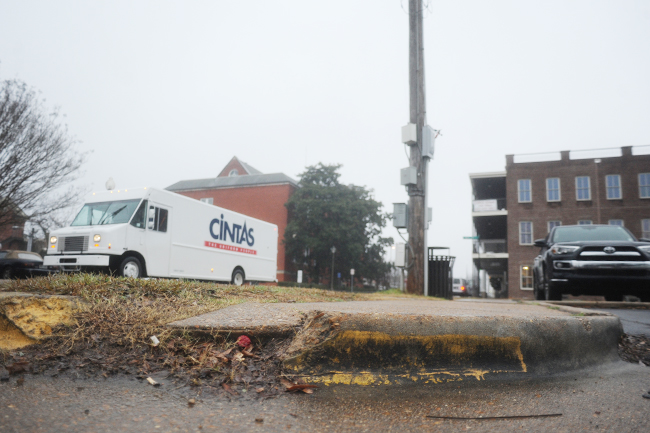 When city officials first started discussing making the sidewalks around the downtown Square more accessible for people with disabilities, the upgrades were expected to cost about $80,000.

Then the bids were opened.

City Engineer Bart Robinson told the Oxford Board of Aldermen during its regular meeting Tuesday that the work to create more ramps at the crosswalks on the Square will cost $134,000.

Five construction companies submitted bids that ranged from $134,000 to $299,000. The lowest bid came from Colom Construction in Ripley. Robinson asked the board to allow him to reallocate some funds in his budget to make up the difference.

Mayor Pat Patterson asked Robinson if he was sure he didn’t want to try rebidding the project.

In January, Elliott & Britt Engineering did the design of the ramps and a field inspection to locate the areas that needed the improvements the most, and where there were existing crossings that did not meet the American with Disabilities Act requirements.

The primary focus is to create accessible ramps at the intersections of North and South Lamar boulevards.

Robinson said the ADA accessible ramps  will look similar to the ramp put in on Van Buren near 10th Street a couple of years ago.

In other business, the board:

• Approved the annual report for the Reserve and Trust Fund. The $30 million investment from the sale of Baptist Memorial Hospital-North Mississippi was worth $32.7 million on March 31, which is the end of the fiscal year for the fund. The city has drawn $2.4 million in earning since 2013, which would put the total earnings of the fund at just over $5 million since its inception in 2012.

• Approved a request from the Downtown Parking Advisory Commission to conduct a parking study on the property where the city-owned lot currently is behind the Oxford-University Club. The commission voted last month that it favored that spot for a future parking garage. The study will examine ingress and egress options and traffic counts. The vote was 5 to 1 with Alderman Janice Antonow as the dissenting vote. Alderman John Morgan did not attend the meeting.

• Heard the second reading of a proposed zoning change for 1.8 acres on Old Sardis Road, slated to be the home of a new Dollar General, from Multi-Unit Residential to Neighborhood Business. No comments were made from the public. Two letters of objection were filed with the city clerk. The board will vote in two weeks.

• Heard the first reading of a proposed ordinance amending the city’s Dumpster collection rates to add 2- and 10-ton Dumpsters and the fees to collect from them from businesses just outside of city limits.