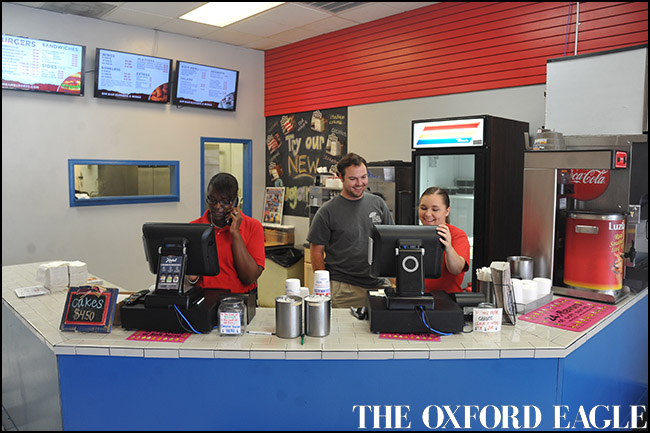 However, Bim Bam Burgers and Wings owner Tony Barragan is a firm believer that past transgressions should stay in the past and that with hard work, dedication and perseverance to follow one’s dreams, anyone can change their life for the better.

Just a few years ago, Barragan served time in prison and afterward, found himself homeless. When his friend, Yerby Weaver, gave him a place to stay he promised him he would pay him back one day.

Today, Barragan and Weaver are co-owners of Bim Bam Burgers in Oxford.

In 2013, Barragan was the manager of Christy’s Burgers in Oxford. When the owner no longer wanted the restaurant, he sold it to Barragan who changed the name to Bim Bam. He made Weaver his equal partner.

Recently, the restaurant was closed for about a week to undergo renovations. Gone is the navy blue and red colors, replaced by the classic powder blue that the Ole Miss Rebels once

wore. The name also gives homage to the Rebels as it was taken from the Hotty Toddy Champ.

“We changed the entire look,” he said. “We put in booth seating and implemented some new items, including salads, four new wing flavors, four new burgers and soft-serve ice cream.”

Barragan bought four ice cream machines which can serve up soft-serve flavors like banana pudding and cheesecake. The new burgers are a mushroom and Swiss burger, a jalapeno and cheddar burger, three cheese and bacon burger and a “blazin’ burger,” with ghost pepper cheese.

“You really got to like hot stuff for that one,” he said of the blazin’ burger.

Barragan developed a love for cooking when he took a job at a gas station in Como after moving to the area from Chicago in 1996 and learned to cook biscuits and other breakfast food. He bought a griddle from Walmart and started making hamburgers.

“We couldn’t keep up,” he said. “As soon as I made some, they were gone. But that’s how I started to fall in love with the restaurant businesses — with a small fryer and griddle in a gas station.”

He attempted to open a restaurant in 1998 but he admits it failed.

“I didn’t know the administrative side of the business,” he said.

In 2011, he was one of the opening managers of Buffalo Wild Wings.

“I learned so much during my time there,” he said.

The restaurant has a new website as well and offers delivery through Landshark Delivery. A second Bim Bam was opened in Tupelo in 2015. A loyal customer who lived in Starkville but visited Bim Bam when he was in Oxford partnered with Barragan to open a similar restaurant under the name of Bully’s Burgers and Winds. In March, Barragan opened a Bim Bam in Batesville, that is run by his wife, Erica. A new location in New Albany is expected to open this summer. Barragan said more locations are being planned in other Southern states.

While he continues to grow his Bim Bam franchise, Barragan is also working on a book about how he went from felon to restaurant owner.

“I want to inspire others,” Barragan said.