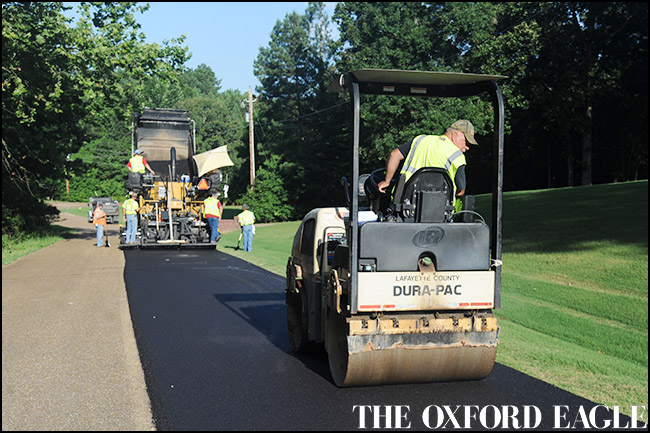 Tracy Vaughn, foreground, was among a Lafayette County road crew paving a road in Woodland Hills in Oxford, Miss. on Thursday, July 7, 2016.

Budget talks continue among Lafayette County supervisors and department heads who are presenting their proposed budgets for fiscal year 2016-2017 along with their “wish lists,” that include new vehicles, more employees or upgraded equipment.

It’s the first go-around in the budget process as revenue numbers aren’t in yet. Supervisors will review the different department budgets again and determine what the county can afford to spend.

On Wednesday, supervisors reviewed proposed budgets for the solid waste and road and bridge departments.

Solid Waste Manager Kenneth Drewrey presented his $1,928,415 budget to the board Wednesday.

The main discussion focused on how to increase revenues for the department. Currently, trash collection is charged to people when they purchase a vehicle tag in the county.

“We got landlords renting places to students with out-of-state tags,” he said. “I really hate to think of how much money we’re not collecting.”

One way to help increase collection, according to Supervisor Chad McLarty, could be purchasing everyone in the county a 65-gallon toter garbage and purchase a special arm that would require just one man to operate the truck. The cans could also come with a computer chip that would be able to track a can if it’s stolen.

“If you don’t have a can, it means you didn’t pay,” McLarty said.

“But you can’t let the garbage sit there,” said Board President Jeff Busby.

“No, but now you can enforce collection and you know who has and hasn’t paid,” McLarty said.

“We could start in a couple subdivisions and see how it goes,” suggested Supervisor Kevin Frye.

Supervisor Mike Roberts said he’d like to investigate other ways to insure residents are paying for collection before jumping into a costly program.

Drewrey said he’d look at other counties and see how they handle their solid waste collection.

New road manager Joe Bynum presented two budgets for his department — one for road maintenance at $3.4 million and one for bridge and culvert work at $3.1 million.

Bynum is asking for four pick-ups and three new service trucks along with an F450 flatbed that he says will help his crews pick up rubbish and lawn debris faster than pulling a trailer behind a smaller truck, rather than purchasing a new expensive knuckle boom truck.

“They can handle a lot of the smaller jobs that way and get things picked up faster,” he told the supervisors.

Each year, the county has budgeted about $1.2 million for asphalt with each supervisor having about $200,000 to spend on roads in their district. With the revenues from the Baptist investment, the last two years, an additional $500,000 has been budgeted, giving supervisors about $300,000 per district. However, since the fund fell bellow the initial $20 million investment at the end of the fiscal year in March, the board will not be taking the usual 3 percent from the interest earned by the fund.

Discussions Wednesday centered around whether to spend more on asphalt and do less, albeit higher quality and longer lasting roads, or to use double bituminous surface treatment, which is rock mixed with asphalt and is much cheaper than pure asphalt.

“But you may get six months to two years life span out of it and then we’re back having to fix that road,” Busby said.

“We have the lowest tax rate of any of the surrounding counties,” he said.

Busby said the board needed to see the revenue before any decisions are made about the millage rate.

The budget, by state law, must be voted on and approved by Sept. 15. Supervisors will continue discussions with department heads throughout July.