THE NEXT STEP: Rebels’ look to build off last year’s ‘Sweet 16’ run 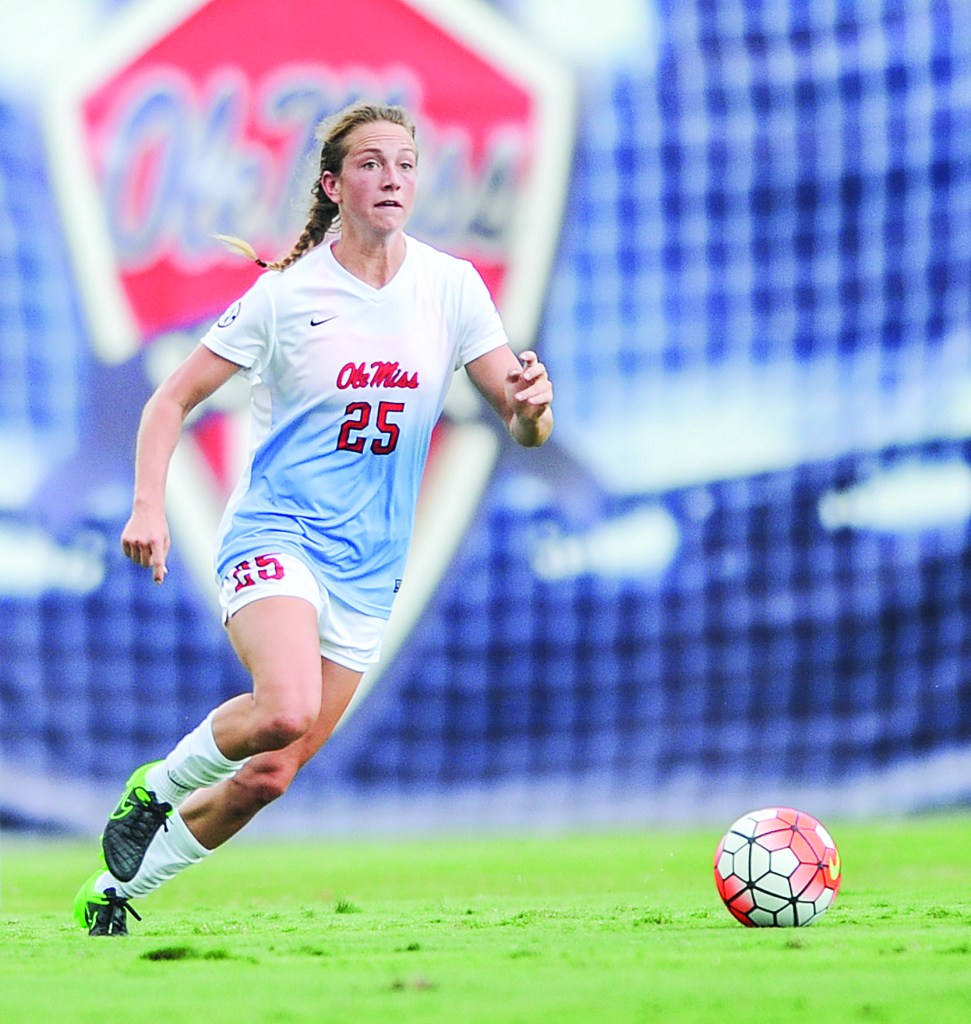 Rising senior Addie Forbus leads another seasoned Ole Miss team who are looking to make another deep run in the NCAA Tournament this season. (Bruce Newman)

2015 was one of, if not the best, seasons in Ole Miss women’s soccer program history. The Rebels made a deep run in the NCAA Tournament, reaching the Sweet 16 before Texas A&M eliminated them via penalty kicks after a 1-1 tie.

After being picked 10th by the Southeastern Conference coaches in a preseason poll, Ole Miss went on to have a 14-5-4 record and went 7-4 in conference play to earn the No. 3 seed in the SEC Tournament.

Last year the Rebels defied expectations. This year they will have to meet or exceed them.

To make it to Orange Beach, Alabama and beyond this year Mott, who is entering his seventh year at Ole Miss, will rely on yet another experienced group of players that have all the makings to send Ole Miss deep into the postseason for a second straight year.

After losing six seniors, all starters, to graduation in May there is another large group of six rising seniors ready to take over. Amory native, Addie Forbus leads the group along with Laurel’s Sara Coleman. Forbus recorded over 2,100 minutes and scored 11 goals, tying rising sophomore CeCe Kizer for a team-high 29 points.

“It’s a new team, certainly,” Mott said. “You look at (the ’14 and ’15 teams) you’ve got very similar lineups. Now it’s different. You lose the group that you lost. I’m excited. We return so much of our punch and a majority of our goals comes back.”

Defensive stability
It may be a different team in some aspects but one this that stays the same will be who is manning the goal for the Rebels. Red-shirt sophomore Marnie Merritt is returning between the posts after having a successful first season. It was a tough call a year ago for Mott who had to choose between what he felt were two goalies who could start for any SEC team in Merritt and red-shirt junior Madi Kileen.

Merritt played, and started, in all 23 games last season, getting only 42 minutes of rest the entire season. She had gave up 26 goals and had a goals allowed average of 1.09 while making 93 saves for a .782 save percentage. Kileen played in two games while giving up zero goals and had one save.

“(Merritt), in my opinion is one of the top two or three goalkeepers in the league,” Mott said. “She’s as good as there is and she matured throughout the year. She kept us in the Clemson game, kept us in the A&M game. At the end of the years she was playing her absolute best. …Kileen is in her fourth year and has done a great job and pushes Marnie every day. We have two SEC starting goalkeepers.”

One change on defense is Sara Coleman, one of three fifth-year seniors on the team, is relocation from her forward position to back on defense this season and saw action during the Rebels’ spring season.

Incoming talent
As has been the case for a few seasons, Mott has been able to bring a ‘balanced’ recruiting class to Ole Miss. This year’s group has a little local flavor as reigning Mississippi Gatorade Player of the year in girls soccer and Lafayette’s own Alley Houghton will be joining the team when they begin preseason drills in August. Houghton is not the only freshman with accolades as Mott recruited Tennessee’s Gatorade Player of the Year in Collierville’s Gabby Little. Little is expected to be Bethany Bunker’s replacement, who was one of the six departing seniors in May.

“She’s fantastic,” Mott said of Little. “She’s fast. She’s strong. She’s powerful. I think she’s going to turn a lot of heads and be a big key for us.”

Ole Miss kicks off its season on Aug. 12 with an exhibition match at SMU before their season opener at home against Louisiana-Lafayette on Aug. 19.