Neilson’s gets nod from Square panel for new LED lights 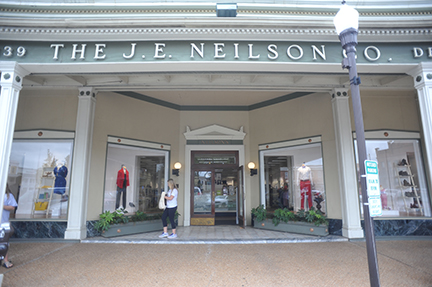 Bruce Newman Neilson’s, located on the Square, underwent renovations a year ago, but will soon be repainted white with various shades of gray, as well as replace exterior lighting with LED lights.

Oxford’s oldest business might be more than 175 years old, but owners are making small changes to keep the exterior looking like new.

“The ones that are out there right now are mercury lights and they’re not only outdated, but they create hot spots and diminish intensity over time,” Lewis said.

There will be 14 linear fixtures with LED lighting on the outside of the building that will be mounted behind the gutters.

“I think it will give credit to the Square’s ambiance,” Lewis told the commission. “I wouldn’t be doing this if I didn’t think it would.”

The commission unanimously approved the request.

Lewis told the commission the store will soon be repainted white as it was for many years, with different shades of gray accents.

“We will have five shades of gray,” he said, inducing a round of chuckles from the commission.

Neilson’s was built in 1839 by William Smith Neilson. It suffered serious damage during the Civil War in 1864 but was rebuilt and reopened in 1866 and has remained open since. The Lewis family purchased the store in the 1960s.