Recycling returns to the county 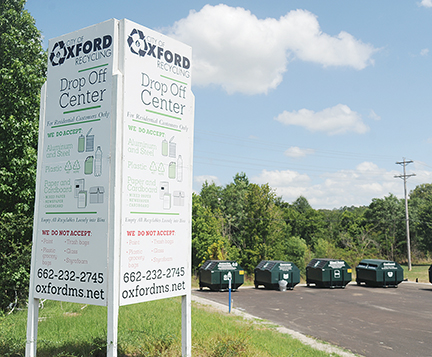 A recycling drop-off location on Highway 7 is now open again after being closed for more than a year.

People in Oxford and Lafayette County can drop off their recyclables 24 hours a day, seven days a week at the drop-off site, located on Highway 7 South, just past Office Park Drive on the left, next to Fire Station No. 3.

The site had been there for several years until the Mississippi Department of Transportation announced plans to widen Highway 7 and the facility was closed in February 2015. However, MDOT has stalled the project for an indefinite amount of time which led to the location reopening on June 15.

“We received phone call after phone call asking when we were opening it up again,” said Michelle Robinson, recycling coordinator for the city of Oxford.

The site is managed by the Oxford’s Recycling Department. While much of the city has curbside pick-up for recycling, there is none in Lafayette County.

There are eight large bins at the site — two for cardboard, two for newspaper, two for mixed paper and two for No. 1 and 2 plastics and aluminum cans. Glass and Styrofoam are currently not being accepted for recycling.

“Since we’ve opened, we’ve had to empty all the bins and it’s only been about three weeks,” she said.

The site recently underwent some upgrades as well.

“We’ve paved the site, put in a new sign, painted the bins and planted a few trees and bushes there,” Robinson said.

Other recycling drop-off locations are located at the City Shop on Molly Barr Road beside the Oxford Police Station, and at the Recycling Center at the city of Oxford Landfill on County Road 321, commonly known as Pea Ridge Road.

Businesses are required to bring recyclables to the city landfill.

For more information, call Robinson at 662-232-2745 or visit www.oxfordms.net/departments/recycling.