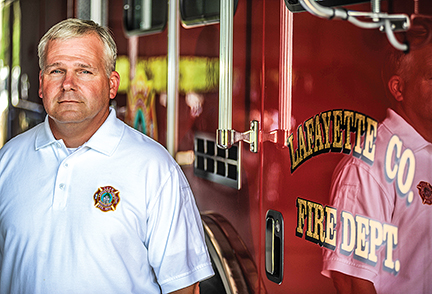 Kim Thorne admits that when he became a volunteer firefighter in 1998, being around the “big red truck,” and the adrenaline rush that comes when responding to a fire call is what drew him initially.

“But some of it was the thought of being able to help people in a time of need and giving back to the community,” Thorne said.

Thorne, 50, joined the Lafayette County Volunteer Fire Department in October 1998. He worked at Station No. 15. Eventually, he worked his way up, becoming a captain and unit representative on the fire board, which is the governing body of the department.

“I learned early you had to earn the respect of the other firefighters,” he said. “It didn’t just come with the position. I worked hard to gain that respect.”

The hard work paid off and caught the attention of those in higher ranks. He took on more leadership roles, including being one of five district chiefs and the operations chief of the department’s Search and Rescue Team.

When the job for chief became vacant, he applied and was interviewed. On March 12, 2015, he was named fire chief to serve a four-year term.

While the process for the “job” as chief was like any management position, being the fire chief is also a volunteer position. Thorne receives no salary for dedicating a good portion of his life to serving his fellow Lafayette County residents.

“I never thought for a minute when I joined the department that one day I’d be chief,” he said.

When he isn’t putting out brush fires, saving someone’s home, or under piles of administrative paperwork, Thorne is the vice president at Reid Electric Service in Oxford.

Being a volunteer firefighter can be challenging when juggling work, home life and responding to fire calls. Those challenges multiply when you become the chief.

“Between my real job, family, and whatever happens to be going on during a particular week, I sometimes feel that I’m not able to dedicate as much time to the department as I should,” he said. “Then the next week comes and it may be the complete opposite.”

Thorne is married to his wife, Sue Thorne, who is the business analyst for the University of Mississippi School of Pharmacy. Their son, Taylor, is a student at the Savannah College of Art & Design.

Having a supportive family is key for volunteer firefighters like Thorne, he said.

“I’d like to thank the wives, husbands, children, and friends of every Lafayette County firefighter who has put up with us leaving at the drop of the fire tones — no matter if it’s2 o’clock in the afternoon or 2 o’clock in the morning, a typical work day, Christmas Day, or even a wedding anniversary,” he said.

With new training requirements and people just becoming busier, the number of residents applying to become volunteers has dropped over the years, Thorne said.

“Fifteen years ago, we would have around 25 new firefighters enrolled in our volunteer certification class and would graduate 20 or so.,” he said. “This past year, we started with 11 enrolled in the class and graduated seven.”

Thorne is concerned a lot of the leadership in the department is starting to get older and hopes the department can train the younger volunteers to one day take their place.

“I hate to say it, but we’re getting older and won’t be able to do this forever,” he said.

While Lafayette County Board of Supervisors considers a request from the fire department to allow for six full-time paid firefighters in the department, Thorne said volunteers will always be the life force of the department.

“We all have to do our part to be good neighbors,” he said “The strength of our community depends on our willingness to help our neighbors in time of critical need. I can’t think of any greater service for our community than to respond to my neighbor’s plea for help when he smells smoke or he lets a burning trash pile get out of control.

“We need women and men to step up and be a good neighbor. That’s what makes Lafayette County a great place to live.”

Anyone over the age of 18 with a valid driver’s license can apply. No experience or training is necessary to apply. If accepted, a volunteer firefighter will undergo an 80-hour training course.

Applications are available at the Central Fire Station on County Road 1032. Call 662-232-2880 for more information on how to become a volunteer firefighter.