Possums can wreak havoc on lawns and fire ants 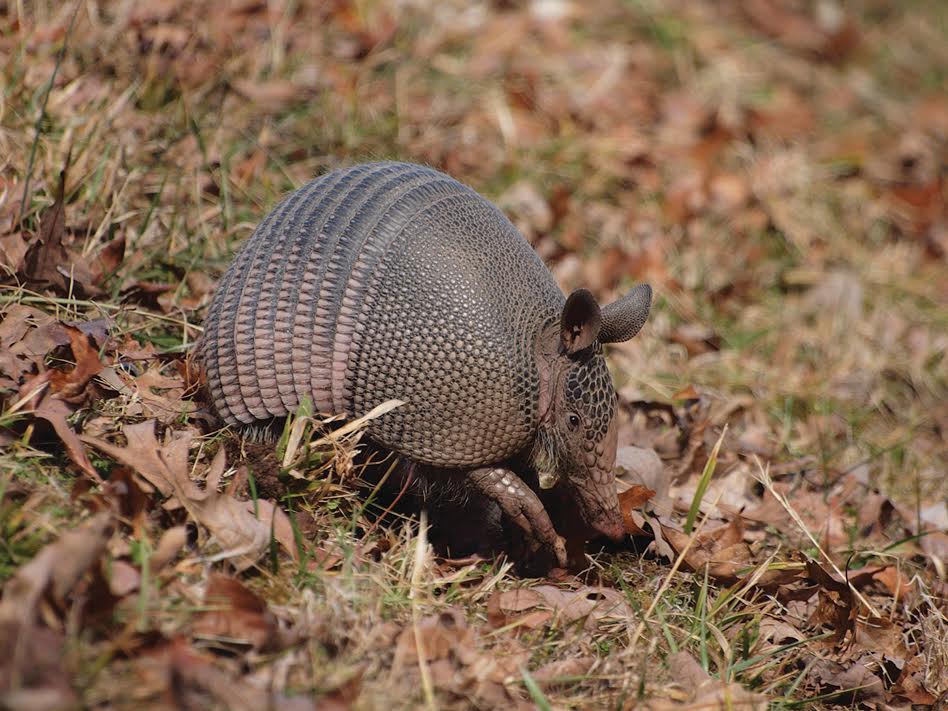 Ever wonder what formed those cone-shaped divots in your lawn? It wasn’t a robin after an early worm, nor a squirrel rummaging for acorns; it was probably an armadillo, known locally as possum on the half shell, or in the Lone Star state as a Texas speed bump.

These curious-looking critters are exclusive to the Americas, and are the lone survivors of an extinct family of armored mammals called glyptodonts. Armadillo is Spanish for “little armored one”. (The Aztecs called them “turtle-rabbits”.)  They are part of a zoological classification which includes anteaters and sloths. They come in numerous species, all stuck in South America until the Panama Isthmus formed, allowing their northward migration. Armadillos crossed the Rio Grande a long time ago, and more recently the Mississippi.

Our local species is the nine-banded armadillo found mainly in Texas and the south central states, but now spreading eastward to South Carolina and Florida and as far north as Nebraska and central Indiana. Their range is constantly expanding due to a dearth of natural predators, or as former Missouri congressman William Todd Akin (R-Mo.) would say, ‘legitimate predators.’

An old joke goes like this: “Why did the chicken cross the road?”  “To prove to the armadillo that it could be done.” But, according to prevailing theory, few armadillos actually get run over. Due to their jumping tendency when startled they conk out when hitting a car’s undercarriage.  (I said it was a theory.)

The skill set armadillos deployed in reaching these parts is their knack of river crossing. They have two techniques: one is by bloating themselves up and floating, the other, if the water is fairly shallow, by walking on the bottom. (They can hold their breath for five minutes.)

Resourceful Texans have turned their penchant for armadillos into moneymaking ventures. One popular event features armadillo races. These races have strict rules. One rule is you can’t touch the armadillo. But to make your armadillo speed up you are allowed to blow on its tail. A popular prize for the winner is a small vial of armadillo milk. When one breeder was asked how you milk an armadillo, he said, “With tweezers.”

Since armadillos have extremely poor eyesight they have to rely on their keen sense of smell to locate their food. They use their claws to dig and find food, which consists of insects, worms and even small frogs and snakes. They have stubby, powerful legs along with strong claws and will dig numerous burrows and bolt holes interlinked with a network of tunnels. They probe the ground and rotting trees for grubs. When you see a newly planted shrub dug up, it is probably because the armadillo was lured to the grubs and worms that are attracted to the mulch and compost that you used in planting the shrub.

Armadillos are one of the few natural enemies of the wicked fire ant. They have been known to dig into fire-ant mounds during droughts when other insects are hard to find.

The armadillo burrow is a single corridor the width of its body, perfect for birthing. Gestation takes from 60 to 150 days, since the nine-banded armadillo can postpone uterine implantation until environmental conditions are favorable. She has only one fertilized egg, but, remarkably, during embryo genesis four identical progeny will develop. (Her litter will be all male or all females.) They’ll be born with open eyes and soft leathery skin. The young can move about within a few hours and will remain with their mother during the spring and summer months. They are solitary varmints so as soon as her offspring mature she chucks them out. They will live to seven years in the wild and ten in captivity.

They are hard to get rid of when they choose your backyard to live in. Repellents (containing nontoxic ingredients like caster oil, limestone, red pepper) are available but you have to repeatedly apply them. Alternatively, if you live in the county, a standard velocity .22 LR is said to be plenty adequate for an act of extreme prejudice, though the Washington Post reported a year ago that an East Texas man ended up in the hospital after he fired at an armadillo and the bullet bounced off the animal’s back and hit him in his face.

You could also trap them. A no-kill wooden trap can be purchased  (thearmadillotrap@gmail.com), but then where do you dump your live captives? Amazingly, they can scale fences so they’d never be homeless for long.

(Trigger warning: disturbing content follows!) Because armadillos are among the few known animals that can contract leprosy (Hansen’s Disease) they are often used in scientific medical research. Unfortunately, humans can become infected by handling armadillos or eating armadillo meat. Leprosy was unknown in the pre-Columbian Americas so armadillos acquired the disease from settlers. On the bright side, while leprosy is not exactly a fun disease, these days it is easy to cure. On the other hand, armadillos are a natural reservoir for Chagas disease (but so are raccoons and opossums), which, 30 years after contracting, it will cause heart disease in 20 percent of victims. Chagas disease (also called American typanosomiasis) is more often spread through an insect called a “kissing bug” (or “assassin bug”) and is rare in the U.S. but common south of here among poor folk.

Because there were never any armadillos in the old world, they missed out being mentioned in the world’s great literature. Rudyard Kipling, after a speaking tour of North America, did concoct a little-read story about the origin of the armadillo. They were not around in Mississippi at the time local wordsmith William Faulkner was putting pen to paper, but he might have had a field day with sinister Snopesian schemes to eradicate them, or make a buck out of them.

Nor are they mentioned in the Bible. But would they be kosher, you ask. Based on a Levitical ban on anteaters  (close relatives of our friend) and another on burrow dwellers, armadillos would never grace a kosher table.

Walt Disney featured the critter in “Pluto and the Armadillo” (1943), wherein Mickey and Pluto travel to South America and Pluto plays with a rolled-up armadillo thinking it a ball. Later they become friends, naturally.

On a less literary note, armadillos can be housebroken, but who would want one as a pet? My husband, that’s who. In the children’s section of Chicago’s Lincoln Park Zoo, he would push the little kids aside and play for hours with the zoo’s tame armadillo.