YOUTH MOVEMENT: Underclassmen will be the key to Rebels’ success in ’16 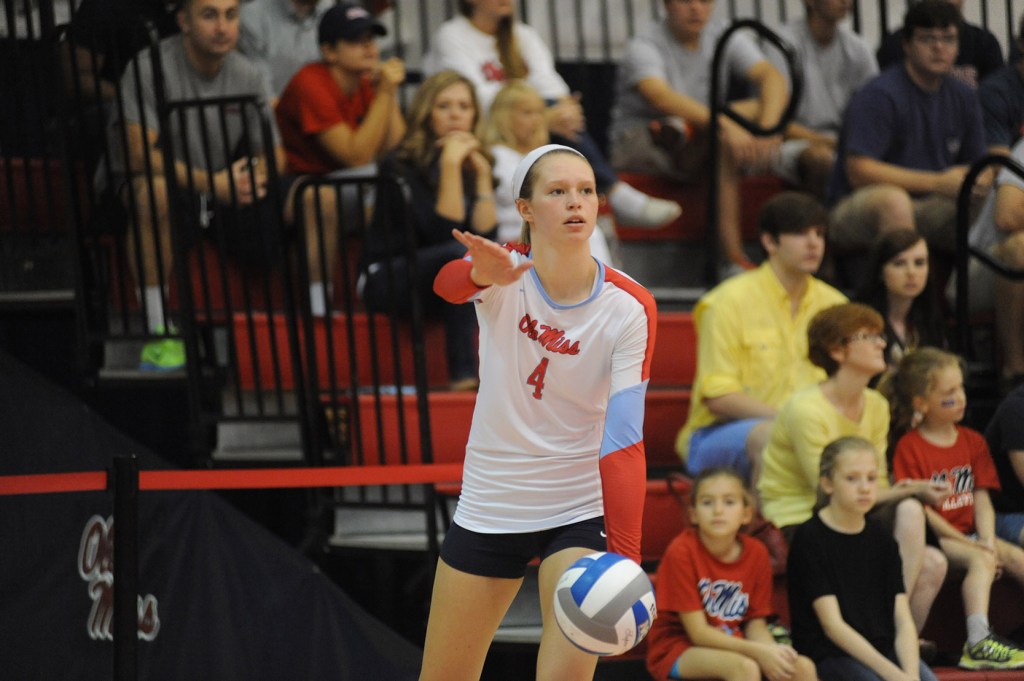 Aubrey Edie will the lone senior for Ole Miss this season that will look to guide 12 underclassmen on the roster. (Bruce Newman)

There are 16 players listed on the roster for the Ole Miss volleyball team this season. Twelve of those are sophomores or younger. Six sophomores and six freshmen.
It will be the youngest team coach Steve McRoberts has had during his time at Ole Miss. It could also be his most challenging coming off a 22-11 year and an 8-10 record in Southeastern Conference play.

“We’re going to have a young team this year,” McRoberts said. “We’re not going to use it as an excuse. There’s going to be some challenges naturally within that. Every collegiate sport, there’s a lot of successful teams that have success with young players. …It’s just kind of a rebuild year for us.”

The top half of his roster is comprised of one senior, Aubrey Edie, and three juniors — Lexi Thompson, Kate Gibson and Taylor Alexander. There is plenty of experience amongst the four upperclassman for McRoberts to rely upon with Edie and Thompson having played key minutes throughout their Ole Miss careers.

Between Edie, Gibson and Thompson, 659 kills were recorded a year ago along with 68 service aces. They also piled up 777 digs, bringing a wealth of defensive production back.

With only one senior, Edie will be looked to as a leader on the court to the rest of the team, especially the younger players. Though she will rely on the help of Thompson and the two juniors to help out. Edie is not the demonstrative leader you sometimes see on the courts or field, no matter the sport, she rather lets her actions rally the team and leads by example.

“Her personality, she’s kind of quiet and a consummate teammate,” McRoberts said of Edie. “We’ll just kind of see how she grows into now that she is in that senior role what her voice is going to be. She does it more with her play and the underclassmen look up to her in that role. Her voice, when she does talk, carries a lot of weight because of that.”

Up for grabs
With the loss of so many key starting positions due to graduation and one player transferring out, the preseason workout could prove to be an exciting one, according to McRoberts.

No position is safe and the workouts will be more competitive than they have been in seasons past as the starting lineup is nowhere near set for the season, which starts in late August.

“If we can stay healthy I think every position is up for grabs,” McRoberts said. “Aubrey has run it for three years. It will be hard to take her spot but this will be the most that she’s been pushed. It’s just competiton. It’s not just competition, it’s higher level competition that you want.”

New faces
Of the six true freshman staring their career at Ole Miss, McRoberts is high on a couple to make immediate impacts. Some may find themsevleves on the court quciker than even they ancticpated when committing to the Rebels last year.

Ole Miss begins their season on the road with a trip to Grand Forks, North Dakota and will participate in the North Dakota Tournament Aug. 26-27. They will return home for the Rebel Invitational Sept. 2-3.