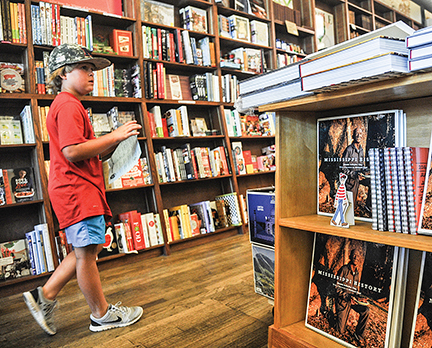 Bruce Newman John Alden Russell looks to get his form marked after finding Waldo at Off Square Books on Friday.

For the month of July, he’s hiding in stores all around the Oxford Square, as part of the Candlewick Press publishing company’s annual promotion to get members of communities around the nation to get out and support their local businesses.

Two hundred and fifth independent bookstores across the country, including Oxford’s Square Books, are participating in the fifth annual installment of the program. Candlewick Press began the promotion five years ago in order to revitalize interest among younger generations in the Waldo character, who first rose to prominence in the 1980s as the subject of a series of “find-it” books, as well as to support the Shop Local movement with the help of the American Booksellers Association.

After beginning the program on Waldo’s 25th anniversary, Candlewick has seen so much success across the nation that they have now reached the 30th anniversary milestone for the character.

Local program coordinator Alissa Lilly from Square Books said that the amount of participants has grown more and more with each passing year, and she now estimates that at least 500 kids will participate in this year’s month-long event.

She also pointed out how well the community of Oxford, with its concentrated core of local businesses on the Square, is able to accommodate a program such as this year after year.

However, Lilly also emphasized the importance of the event in getting local citizens out to support the vibrant network of local businesses around Oxford, a key component of the program’s intent.

“It’s great for the shops on the Square because July tends to be a little bit of a slower month for shopping,” she said. “A lot of people are out of town, or it’s just so hot that they don’t want to get out. This is a great incentive for people to get out in July.”

Ideally, the promotion will not only bring people to the Square and increase their chances of spending money at these businesses while they are there, but hopefully it will also give people an opportunity to explore some of the shops that they may not have been in before and help these businesses grow their customer base and awareness.

Each participant in the program can pick up a “passport” from Square Books Jr. that contains a list of the 26 participating businesses inside.

When a child finds Waldo in one of the listed businesses, they can have the business stamp or sign their passport on the space reserved for that particular store, until hopefully the child has found all of the Waldo characters hidden around the Square and completely filled their passports.

Although Lilly of Square Books said that the program is more of a promotion rather than a competition, she did say that there are some rewards given to children who reach certain marks.

Children who receive 10 stamps on their passports can bring their passport to Square Books Jr. and receive a free Waldo button in return.

Meanwhile, children who receive 20 or more stamps on their passports are eligible for a grand prize drawing at the annual Summerfest on the Square. The event, sponsored by the Oxford Square Alliance, a collection of businesses on the Square that work together to promote the Square, will be held on Saturday, July 30, at 2 p.m. on the Courthouse Lawn.

“We’ll draw for all the prizes,” Lilly said. “The publisher sent us a big box of Waldo books, sticker books, and coloring books to be given out as prizes, and a lot of the businesses will donate prizes. We’ll have about 20 prizes to give out.”

Lilly said that children can also come get a picture of Waldo, color it in, and upload the picture to Instagram with the hashtag “#ColorWaldoandWin” by Aug. 7 for a chance to win a national drawing, courtesy of Candlewick Press, for a prize pack valued at around $150.

For the fifth year in a row, it appears that the partnership of Candlewick Press and the American Booksellers Association has succeeded in not only giving kids a safe, fun activity to participate in over the summer, but also in  providing a valuable boost to local economies by getting people out of their homes and into local businesses.