Lightning likely cause of fire that displaced family 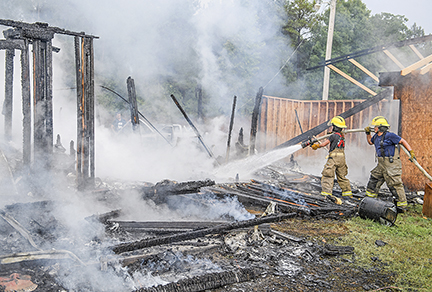 Thomas Graning Lafayette County firefighters work to extinguish a house fire on County Road 376 in Lafayette County on Saturday. The home was a total loss and it is believed lightning caused the blaze.

Lafayette County residents are coming together to provide a local family with some help after a lightning strike hit and burned down their home Saturday afternoon during a thunderstorm.

When the lightning struck during the storm, JoEllen Coaten felt her house shake.

“I heard lightning during the storm,” Coaten said. “It shook the house and knocked the power off for just a minute.

“It scared me to death,” Coaten added. “It sounded so close.”

She looked around her house but saw no damage, so she went back inside to shelter from the storm.

Several minutes later, a Yalobusha County firefighter saw smoke in the area and discovered a house in flames. The home belonged to Coaten’s son, John, and is located near her own home at the top of his hilly driveway. Coaten rushed to check on her son’s home after learning about the fire.

“When they told me about the fire and I got up the hill, it was fully engulfed,” Coaten said.

Lafayette County firefighters responded to the County Road 376 address shortly after 5 p.m. on Saturday to what was reported as a fully-involved house. The fire was finally contained just before 8 p.m.  Officials on the scene said a lightning strike was the likely cause.

John and his fiancée were returning from a swimming trip in Abbeville with their three daughters, ages 2, 4 and 5, when the fire started.

“I texted him to tell them it was storming here,” Coaten said. “He said it was starting to rain there and they were headed home. That’s when I heard the lightning.”

The house, which John built with his father 15 years ago and was in the process of expanding, is a total loss.

Coaten has been amazed by the support from the community.

“It’s been devastating, but I’m amazed by all the people that showed support and love,” she said.

A drop-off location has been set up at Lafayette Elementary School for clothes and other items for the family.