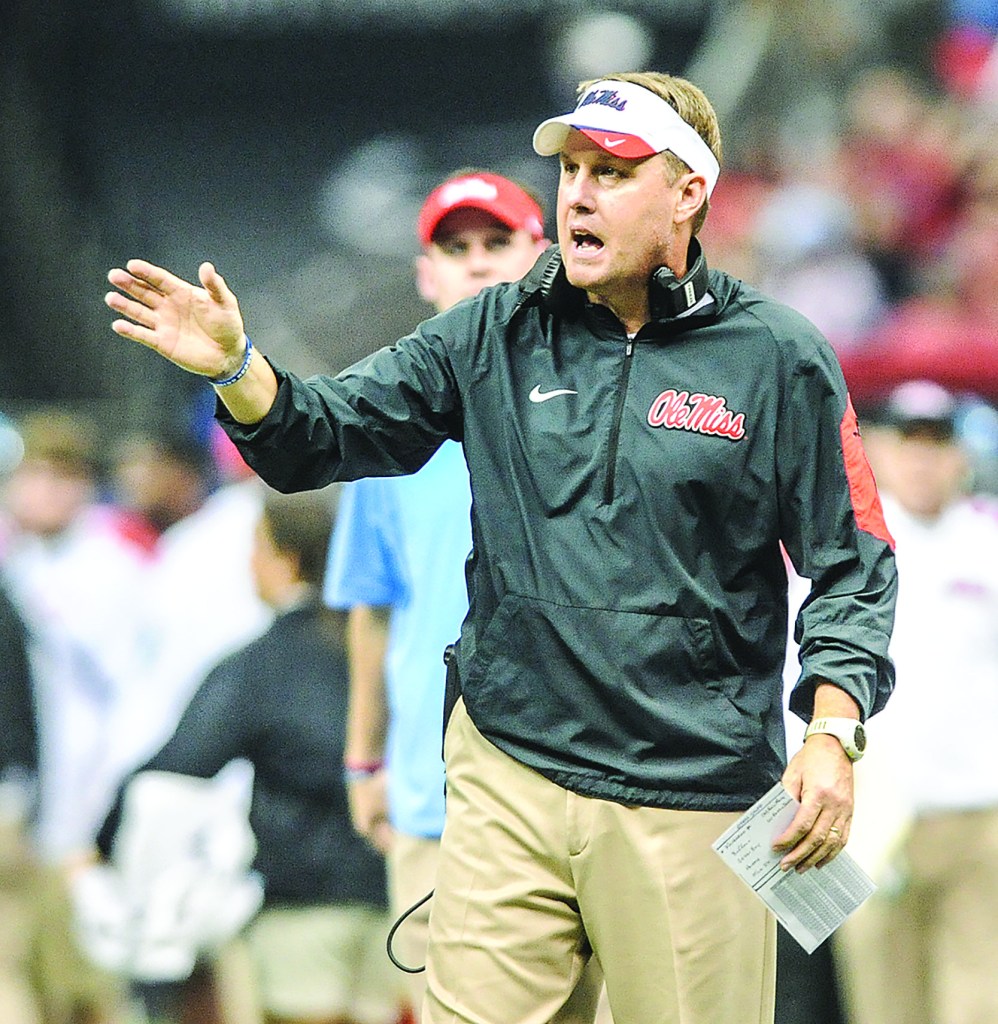 Ole Miss coach Hugh Freeze and his players will be the center of attention Thursday during their appearance at SEC Media Days in Hoover, Ala. (Bruce Newman)

There won’t be any shortage of questions for the foursome.

From the cloud that is the NCAA investigation hovering over the program to shakeup on the roster, there’s plenty to get into.

Here are some of the more pressing questions Ole Miss’ contingent is sure to be asked over and over again during its time in Hoover:

Ole Miss has been looking into its former left tackle’s draft-night claim that he accepted money from an Ole Miss staffer. Unless that investigation is wrapped up sometime between now and the time Freeze steps up to the podium, I don’t expect much more than a no comment from Freeze, but the questions will be asked.

How’s the probe affecting the players?
With the Tunsil investigation ongoing and Ole Miss yet to have its hearing in front of the Committee on Infractions, where additional punishment could be handed down in addition to the penalties Ole Miss self-imposed back in May, that NCAA cloud will likely hover over the program during the season and possibly into next year.

How are the players who are still around dealing with that?

Thursday will be the first time they’ll be asked about the NCAA probe since the school released the Notice of Allegations and its response, and it will be interesting to see if the lingering uncertainty is taking any toll on the players heading into a season where expectations are high.

Any more punishment for offseason arrests?
It’s easy to forget with all the NCAA stuff dominating the headlines recently, but two players expected to contribute a bunch this year, defensive tackle Breeland Speaks and guard Rod Taylor, were arrested in the spring for DUI and shoplifting, respectively.

Both have been disciplined internally, but will they also miss any game time for their missteps? Freeze didn’t rule out the possibility when asked about each arrest months ago.

Speaks, a rising sophomore, is stepping in for the departed Robert Nkemdiche while Taylor, a junior who’s made four career starts, is listed on the two-deep of the preseason depth chart released by Ole Miss last week.

How do you replace three first-round draft picks?
This is the biggest question for Ole Miss on the field.

The best draft in school history saw Tunsil, Nkemdiche and former wideout Laquon Treadwell all go in the first round back in April, leaving Ole Miss to fill some major voids.

The good news for Ole Miss is some experienced answers for Nkemdiche and Treadwell have emerged in the aforementioned Speaks and Quincy Adeboyejo and Damore’ea Stringfellow, who combined to catch 74 passes for 1,107 and 12 touchdowns last season and should soften the blow of losing the SEC’s top receiver.

Left tackle is a different story.

The ultra-talented Tunsil allowed just two sacks in three seasons, and now a former quarterback and tight end, Jeremy Liggins, is listed at the top of the depth chart there. Senior Talbot Buys and redshirt freshman Alex Givens are also there while five-star signee Greg Little will bring a lot of buzz to the most important position battle for the Rebels come fall camp.