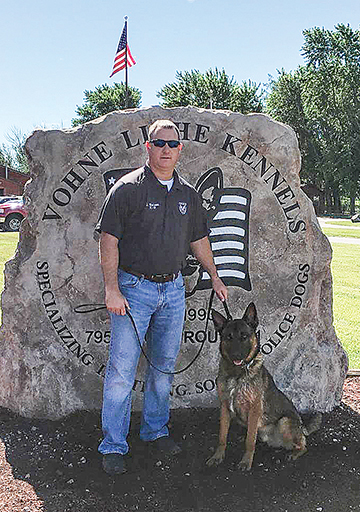 University of Mississippi students hoping to rush the goal posts this year after an Ole Miss Rebel win at home, will face the University Police Department’s fiercest member yet.

K9 Dios, a 1-year-old Belgian Malinois, is the newest officer for the University Police Department.

UPD Chief Tim Potts began the groundwork for restarting the K9 program soon after joining the university force in 2015.

“It’s one of the first programs I thought about bringing back,” Potts said. “I see the real positives that the program brings in.”

The department, with the help of the Ole Miss Family Leadership Council, purchased Dios from Vohne Liche Kennels in Denver, Indiana.

Dios will serve as a dual purpose K9, trained in both narcotics detection and tracking.

“It’s a force multiplier for us, because the K9 can do things that a police officer can’t,” Potts said.

And while goal post protection won’t be Dios’ primary responsibility, he’s likely to make an appearance. “(At Purdue University) we would use a K9 around our goal posts,” Potts said. “One K9 was enough to deter people from going to the goal posts, where I would have to use 15-20 officers to circle the goal posts.”

One of Dios’ primary responsibilities will be narcotics detection. The university saw a 300 percent increase in drug related cases last year, according to Potts. Though Dios will be a narcotics detection dog, UPD will limit how he will be used in residence halls.

“The way we look at it is if we get a complaint, we’re going to go where the complaint is,” Potts said. “We’re not going to go sweeping floor-to-floor. If the dog hits on another room on the way to where we’re supposed to be going, we’ll make note of the room and come back.”

“But we’re not going to just go sniff the first, third and fifth floors, then come back the next day and do the second, fourth and sixth floors,” Potts added. “It’s not what we’re about.”

Potts sees the return of the K9 unit as not only a good law enforcement tool but an even better community relations opportunity.

“Everyone loves a dog, kind of like everyone loves a firefighter,” Potts said with a laugh. “He looks intimidating, but when he comes in and uses his head and makes you want to pet him and the tail is wagging, it’s a great PR tool.

“We want that officer and that dog around as much as possible during the day when people are getting acclimated to campus so they see the dog and are getting used to the dog.”

According to Potts, the public demonstrations of Dios’s skills hopefully will start a conversation between students and officers.

“If it stirs any conversation at all, whether it takes us to Black Lives Matter, or ‘this happened to me one time’ or anyone asks about the dog, it’s a lot better conversation than if people just walked by and we weren’t around,” Potts said. “That’s what we’re hoping to do. Just to stir up some conversation and to foster that relationship between students and the officers.”

Eventually the duo will work a shift from midafternoon to midnight, which will cover the busiest times for drug calls. Potts’ eventual goal is to add a second K9 to have one for both night shifts.

Dios and handler Officer Justin Watson are in week two of a six-week training at Vohne Liche Kennels. They will finish in early August and begin patrol shortly after.