OPD, residents get to know each other eating ice cream 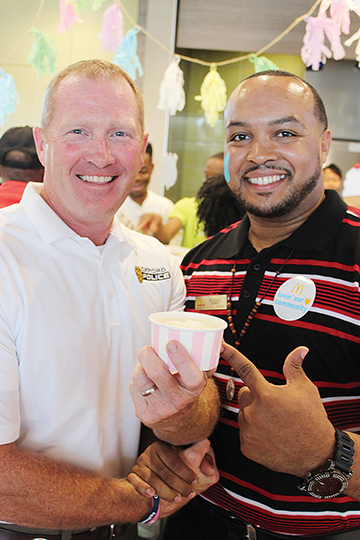 Freeze, you have the right to say “delicious.”

On Wednesday, members of the Oxford Police Department ate ice cream with citizens at the McDonald’s on University Avenue during the first Cones with Cops event from 2 to 4 p.m. The event not only was meant to keep the summer heat away, but also to allow cops and citizens to meet and build relationships.

Though it is the first time for this particular event to be held, the police have had many meetings with the public over the past three years. Over the years, local businesses have hosted events for cops and citizens to talk over coffee or hot cocoa.

“Our police have always done a good job,” McDonald’s owner Betsy Smith, said. “I feel that they have done a nice job with their involvement in building relationships with the community.”

The ice cream party, sponsored by the local McDonald’s, offered free bowls of ice cream with a self-serve topping to the cops and the public. These sweet treats not only helped cool everyone down, they were a lot of fun to make too.

“The event was meant to support the cops and change the mindsets of people who have negative thoughts about cops,” said McDonald’s general manager, Reginal Burney.

Though the events are fun, they also have an important role in showing that the police are one with community. After the recent violence in a number of large cities, these community policing events help strengthen bonds with citizens.

“It’s about getting to know your local officers and showing the people we are the same as anyone else,” said OPD communication supervisor Bridgette Frierson.

Many children came out to meet the police officers and to eat ice cream with them. OPD hopes that by involving children in these meetings, they will learn not to be afraid of cops.

“It’s good for them to know that cops are there to help them,” said Sandra Moss who attended the event.

After a short speech by Chief Joey East, the youth gospel group, Men of Integrity, sang one of their featured songs “Repeat” to commemorate the event. The message of their song was that they hope never to hear about the acts of violence featured in the recent news ever again.  The group’s song can be found on YouTube.

“Young people are our future,” East said. “If they are scared of cops, they will not trust us. We want them to see us like everyone else.”