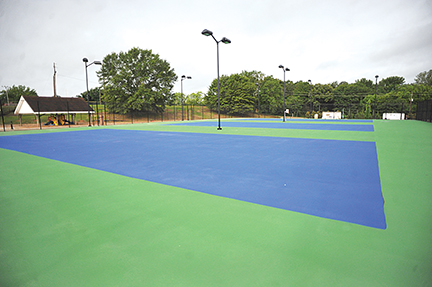 The new tennis courts being built adjacent to the Oxford Activity Center remain a work in progress, in Oxford, Miss. on Friday, May 30, 2014.

With the Oxford Park Commission being involved in more and more projects, creation of more parks, expanding its programs and heading toward building a new activity center, Director Seth Gaines is hoping to hire someone to handle the program’s social media and online content to keep citizens informed of all that’s going on and make registration easier.

Gaines presented the idea Thursday to the Oxford Board of Aldermen during a budget hearing at City Hall. Visit Oxford, the city’s tourism department, has also expressed interest in hiring someone for a similar position.

Mayor Pat Patterson suggested saving money by hiring a single worker to operate out of City Hall, who could then be outsourced to different groups as needed.

Several aldermen and department heads voiced apprehension at this idea, however, as the requirements of the work for these different organizations would be too much strain for only one employee.

Gaines said that there were measures that could be taken on OPC’s end to help create the funds for the position. He said that their contract with a marketing firm is set to expire very soon, which would open up a considerable sum of money. He also pointed out how costly their current online registration system is, costing OPC $1.95 per person for each program that person signs up for, which resulted in a cost of $22,000 last fiscal year.

The Board also agreed to up their current investment in the program Leisure Lifestyles of Oxford from $5,000 to $10,000. Gaines said that the program, which costs around $50,000 — $37,000 of that amount being instructor fees — is receiving $5,000 from both the county and the city under the current model.

Gaines explained the increase to the machinery and equipment budget line was for covering the alarm system at OPC’s offices, four new computers, and two new mowers. Gaines also requested a maintenance truck and an administrative vehicle, as the current administrative vehicle is being split between seven people.

Patterson recommended the aldermen commit to providing $100,000 out of the 2 percent food and beverage tax fund to go toward the construction of a viewing deck at the FNC Tennis Center, on the condition that OPC will first use their funds of $30,000 completely, then look to the city for up to $100,000 of funding.

Alderman Robyn Tannehill also voiced her opinion that they needed to correspond with a team of professionals before beginning construction to find the best fit for the viewing deck, particularly in the face of the adjacent Activity Center’s expanding footprint.

Their presentation concluded with the proposed budget for the Oxford City Pool, which included increases for a new filter system, new pump motor, and rising chemical prices.

Volunteer Oxford’s Director Sara Ball asked the aldermen to approve the matching funds for a grant received each year to help pay for the director’s position.

Although by all accounts Ball said the outlook for receiving the grant is very positive, she mentioned that there have been talks of a possible fundraiser that could help offset the costs of the position should something happen and the grant unexpectedly does not pan out.

Ball said that they are usually given notice for grant applications in September, and that the grant typically falls on a November to October schedule, meaning that the current grant will not expire until the end of October.

Nothing much changed for the Retired Senior Volunteer Program’s budget this year; however Director Arledia Bennett explained that a $1,000 transfer of funds from one budget line to another was to help a new program get off the ground, that would function like a “handyman brigade” for senior citizens around the community.

Volunteers would help seniors around the house with various odd jobs.

Bennett mentioned the possibility of receiving support from the Lafayette Oxford Foundation for Tomorrow for the program moving forward, saying that she was encouraged to apply for one of their grants during the next cycle.

The meeting recessed until 8:30 a.m. Monday when budget talks will continue.