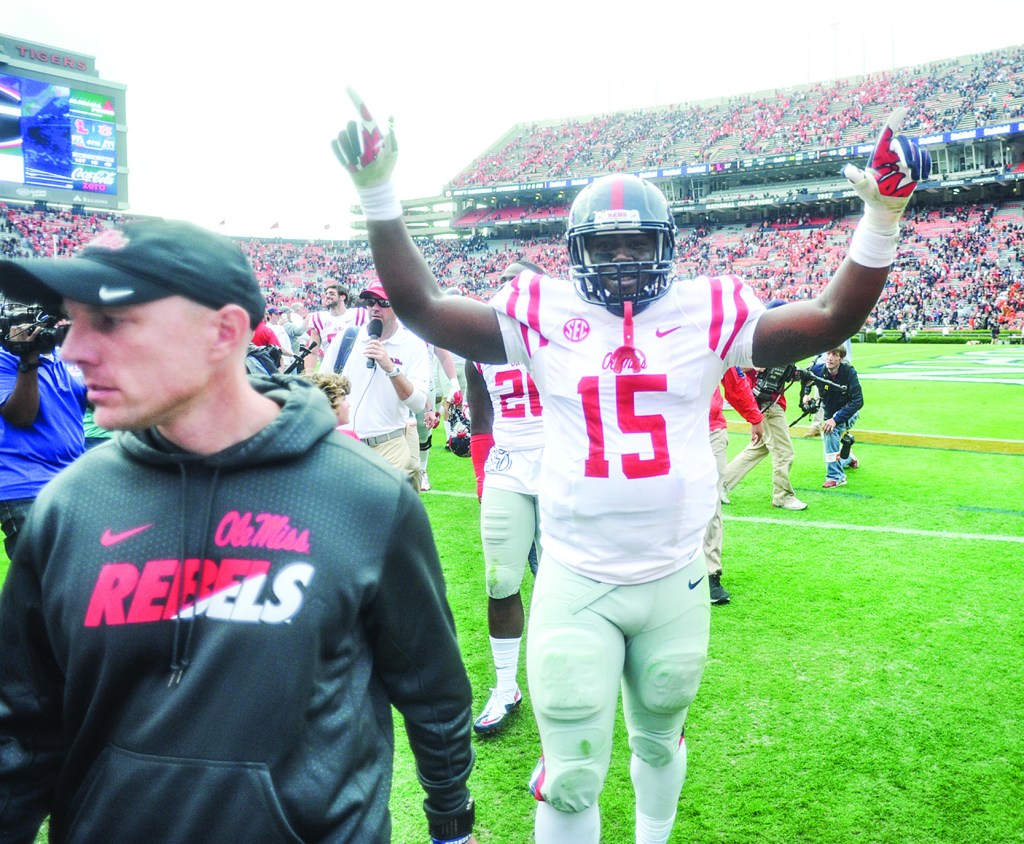 Former quarterback and tight end Jeremy Liggins (15) is competing to replace Laremy Tunsil at left tackle as Ole Miss prepares for life without the jewels of its 2013 recruiting class. (Bruce Newman)

Ole Miss is preparing for life without the jewels of its 2013 signing class, all of which turned into All-Americans during their three-year stint in Oxford before becoming the first three players in program history to be selected in the first round of the same NFL Draft.

The trio leaves behind a blend of spotty experience and youthful talent at their positions.

Quincy Adeboyejo and Damore’ea Stringfellow are in line to step in at the outside receiver spot for Treadwell, the Southeastern Conference’s leading receiver last season and the Rebels’ all-time leading pass catcher. The speedy Adeboyejo has spent most of his first three years at Ole Miss in the slot but worked at both spots in the spring in preparation for the move while Stringfellow was a part of the rotation last year, making five starts in his first season of eligibility with the Rebels after transferring from Washington.

“I just think it’s something they’re ready to take head on and ready to get going,” tight end Evan Engram said. “I don’t think it’s a panic or a worry about filling a certain amount of shoes or filling a gap. They’re just working to step up, make big plays and be that spark for our offense.”

Those aren’t Ole Miss’ only options out wide. The Rebels have stocked up in recent recruiting cycles to build arguably the deepest group of receivers in the SEC as sophomore DaMarkus Lodge and four-star signees D.K. Metcalf, A.J. Brown and Tre Nixon will compete to be a part of the rotation. That doesn’t include redshirt freshman Van Jefferson and junior Markell Pack, who will line up in the slot.

“We’ve been really successful in recruiting with (head) coach (Hugh) Freeze being here, and it’s time for a lot of those guys in the wide receiver room to step up,” Engram said.

Depth is also what the Rebels are counting on to help soften the blow of losing Nkemdiche on the defensive front.

Coaches and players are high on third-year sophomore Breeland Speaks, who will step in for Nkemdiche after posting more tackles (18) than Nkemdiche (16) last season despite making nine less starts as Nkemdiche’s primary backup. A big season could make Speaks a hot name in draft circles while playing alongside fellow NFL hopefuls Marquis Haynes, Fadol Brown and D.J. Jones, who’s in line to take over full-time at nose tackle after playing in all 13 games a season ago with three starts.

“The time that we were given last year, we came into the game and dominated at times together,” Jones said. “Now it’s just coming in as leaders on the team and vets. Just go out and play like you did. Keep that motor up.”

Veteran Issac Gross missed most of last season after undergoing neck surgery but is back for his sixth year while youngsters Ross Donelly, Austrian Robinson and Benito Jones, Mississippi’s top prep defensive line prospect in this year’s recruiting cycle, will add interior reinforcement. Junior Herbert Moore will also be in the mix after missing all of last season with an ACL injury.

“Definitely a group effort,” Jones said of replacing Nkemdiche’s talent. “We’ve got enough guys on the defensive line and the depth to be one of the best defensive lines in the country. With that depth, we’ll be all right.”

New and void
Things aren’t nearly as sturdy when it comes to protecting Chad Kelly’s blind side.

Tunsil’s departure leaves the Rebels not only having to replace an elite talent but having to do so with youth and inexperience. Jeremy Liggins will start fall camp at the top of the depth chart, but the former quarterback and tight end has only been practicing at the position full-time since the spring.

Kelly said taking snaps without Tunsil’s protection this spring was “definitely a little different,” but the senior quarterback also noted he’s comfortable with whoever ends up winning the job.

“As long as the quarterback makes the right calls and is sliding (the protection) the right way to where the protection is coming from, I’ve got all the faith in the world those guys are going to handle their job and take care of what they need to do,” Kelly said.