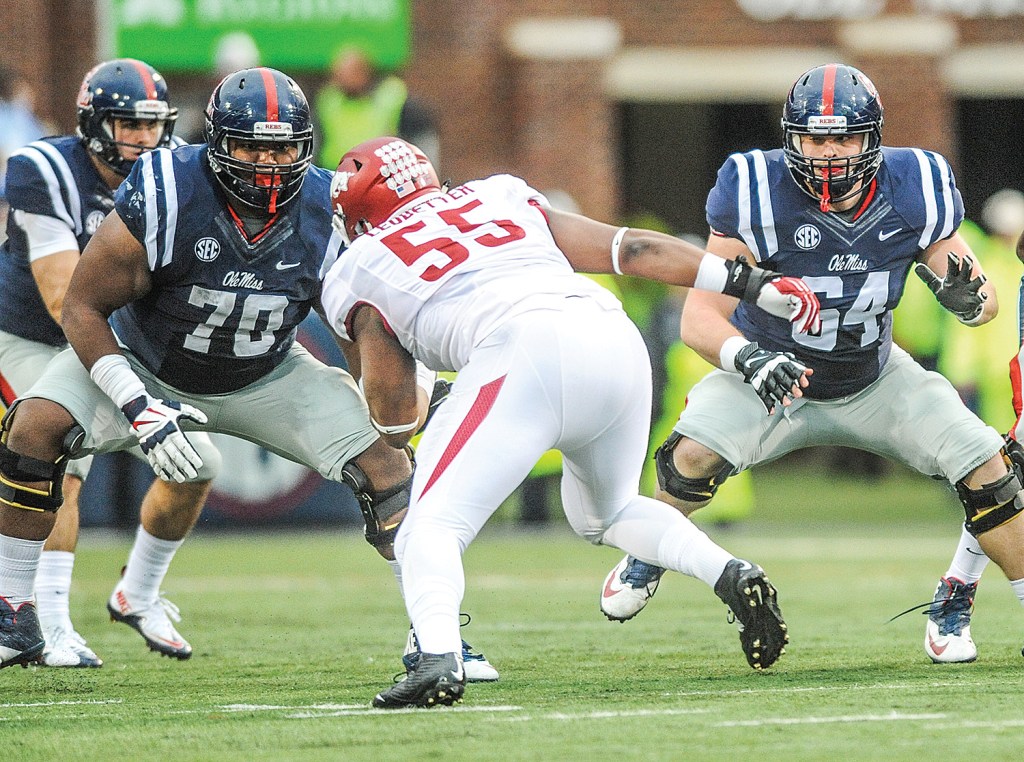 Ole Miss has a handful of experienced offensive linemen back for next season, including third-year sophomore guard Jordan Sims (70), but the unit is far from solidified with some coming back from injuries and others competing for starting positions. (Bruce Newman)

Hugh Freeze also likes the Rebels’ depth at receiver, running back and along the defensive line. But ask the Rebels’ coach about the areas of his team that give him pause as it prepares for another season of competition in the nation’s toughest league, and the answer comes quickly.

Seven players who were part of the regular rotation at both positions last season are gone, including all five linemen who started the Sugar Bowl, with varying degrees of experience left to step in their place this fall.

The Rebels aren’t all that green up front offensively despite the losses as injuries, suspensions and ability level caused them to rotate double-digit linemen in and out last season. Ole Miss has five linemen back who played in at least six games a season ago, though center Robert Conyers (ACL) is coming off a third knee surgery while guard Rod Taylor (shoulder) is also working his way back from surgery.

“I am confident though,” Freeze said. “People forget, you know, Laremy (Tunsil) sat seven games last year, so that allowed us to get to play a lot of young kids like Sean Rawlings, Javon Patterson, Jordan Sims. And we get the return of Robert Conyers.”

But replacing Tunsil may be the toughest chore of all.

The first-round pick’s departure leaves a converted quarterback and tight end (Jeremy Liggins), a pair of freshmen (Alex Givens and Greg Little) and a reserve senior (Talbot Buys) as the ones vying to fill the void at left tackle. Little, a five-star signee from Allen, Texas, could make an immediate push for playing time.

Kelly said he likes the group’s potential, but the rest of the offense will have to do its part to help out.

“As long as we can establish the running game and be more physical up front, I think we’ll have a great year,” Kelly said. 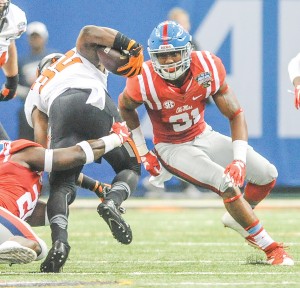 Leading tackler DeMarquis Gates (31) is back at linebacker, but the experience behind him is slim. (Bruce Newman)

DeMarquis Gates finds himself as the veteran of the linebacking corps with C.J. Johnson and Denzel Nkemdiche out of eligibility despite having just four career starts. Gates, who can play in the middle or outside, led the Rebels with 76 tackles last season.

Terry Caldwell and Temario Strong are back in their reserve roles while true freshman Donta Evans could compete for a spot in the rotation after going through spring practice as an early enrollee, but recent whiffs in recruiting left Ole Miss to scurry the junior college and graduate transfer markets for help.

Oregon State transfer Rommel Mageo led the Beavers with 87 tackles a season ago and will immediately be in the mix to start at middle linebacker in his lone season with the Rebels. Iowa Western Community College inside linebacker Detric Bing-Dukes, a former Georgia signee, was a late addition to Ole Miss’ incoming signing class.

Redshirt freshman Willie Hibler is also a new face at linebacker, moving over from tight end in the spring.

“We missed out on recruiting on a couple there, and we’ve got to nail next year’s recruiting class for linebackers because of the need there,” Freeze said. “Fortunately we were able to get Bing-Dukes out of junior college, who had some experience in the SEC, and get Rommel on a graduate transfer from Oregon State.”