Can Oxford double its cycling population in three years? 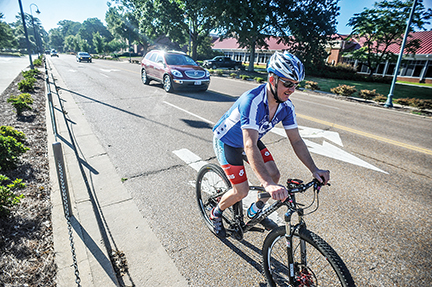 A cyclist on University Avenue in Oxford, Miss. on Tuesday, June 16, 2015. The Pathways Commission and the University of Mississippi Bicycle and Pedestrian Advisory Committee have jointly proposed a temporary project to convert University Avenue to two vehicle lanes, a vehicle turning lane, and two bicycle lanes between South 5th Street and Grove Loop. The Board of Aldermen will take up the proposal at its meeting today.

If the Oxford Pathways Commission can convince a national bicycling organization that it is a community committed to increasing its biking population, it could be selected as one of 10 communities nationwide to receive resources to help make that goal possible.

On Monday, the commission discussed whether Oxford should apply for the Big Jump Project, being sponsored by the People for Bikes organization.

The project’s goal is to help 10 communities achieve a “big jump” in biking by building a network of safe and comfortable places to ride and getting more people to ride bikes as an alternate form of transportation.

If chosen, Pathways would select an area, or neighborhood to be the focal point and then create a completely connected network of stress-free bike lanes. Pathways would also have to prove it would get assistance with funding to accomplish creating the network.

“You do one core network of perfected bike lanes,” said Mike Mossing, former chairman of the commission. “There’s lots of places with bike lanes around but they don’t necessarily interconnect, allowing you to get from, say, (the University of Mississippi) campus to the Square.”

If selected, The Big Jump would provide a set of resources that include study tours and peer exchanges with national and international experts; access to online forums for collaboration with the other selected communities; targeted grants; training; national media focus; research assistance and more.

The letter of intent to apply us due by Aug. 18. The commission agreed to review the application to make sure the program is a good fit for Oxford and think of a focal area to create the completely connected bike network in town and then vote during their Aug. 15 meeting whether to send the letter of intent. The actual application is due in October.