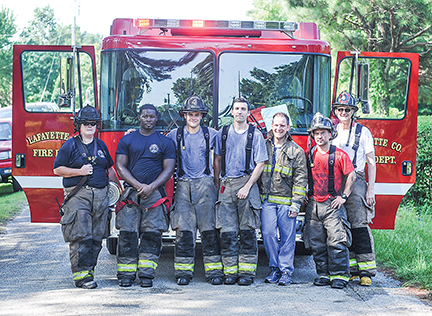 The Lafayette-Oxford-University community has five law enforcement agencies working around the clock to make sure it stays a safe place for its citizens.

The Oxford Police Department is housed at 715 Molly Barr Road. The department has more than 100 full-time officers and staff and provides a wide range of protection and enforcement services.

Chief Joey East heads up the department that has a community-oriented policing philosophy and provides around-the-clock patrols. Other services include crime prevention programs, such as Neighborhood Watch and D.A.R.E., as well as specialized units including Mounted Patrol, K-9 Unit, DUI Enforcement and the City Dispatch.

The University of Mississippi Police Department is responsible for maintaining law and order on the campus and only has jurisdiction there. It is headed up by Chief Tim Potts with 46 officers under his guidance.

Mississippi Highway Patrol Troop E patrols the area’s highways, which include highways 6, 7, 9 and 30.

While the area’s police are there to protect and serve, Oxford and Lafayette County’s fire departments are often on the front lines when disaster strikes, whether it’s putting out a home on fire or responding to a wreck.

The Oxford Fire Department serves and protects approximately 19,000 Oxford residents and 18,000 students on the campus of the University of Mississippi. It also provides auto extrication/rescue for the 640-square miles of Lafayette County and is an integral part of the Mississippi Task Force System responding to natural and manmade disasters throughout the state and region.

Mayor Pat Patterson said Oxford couldn’t be the town that it is without the support and care of its first responders.

“They are the absolute backbone of our community and their compassion for their fellow citizens knows no limit,” Patterson said.

The Lafayette County Fire Department provides fire suppression, fire prevention, and rescue services to the citizens of the county. The department is comprised of 12 units, which allows for better coverage countywide. The LCFD is run by the Fire Board, and coordinates with the Board of Supervisors.

Most of the 100-plus firefighters are volunteers; however the department now has three part-time paid firefighters at the Central Station.

Lafayette County Supervisor and Board President Jeff Busby said the county is blessed, from the volunteer firefighters who save lives to the deputies who patrol an entire county each day.

“We get caught up in our every day lives and don’t realize the protection and what it means to this county until we see events around the world happening today, and  it brings it home,” Busby said. “And we’re fortunate we haven’t had anything like that happen here. Every time they put on their uniform they’re taking that chance. We pray for them each and every day.”

During a disaster, most of the coordination will flow through Oxford’s Emergency Operations Center, which was built to withstand, and remain functional, after an EF5 tornado or earthquake. The building has state-of-the-art communications throughout, a training room, self-contained heating and cooling and power generational capabilities.