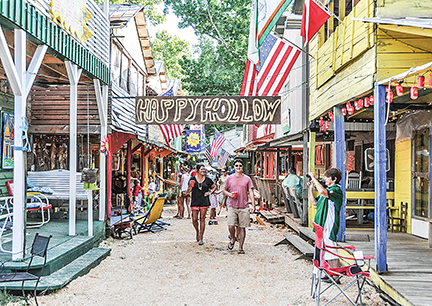 THE FAIR TIMES Every July, thousands come together for the Neshoba County Fair in Philadelphia. Several locals also have been attending the Fair for generations and enjoy the week, which is described as a family reunion and political rally.

The Neshoba County Fair is a hard thing to explain to people who’ve never seen it firsthand.

Essentially, a population the size of a small city congregates in the sweltering July heat in Neshoba County outside of Philadelphia, where they will live for a week in one of the fairgrounds’ approximately 600 cabins, all painted in various gaudy, fluorescent shades and patterns and adorned with displays of Christmas lights in the middle of summer.

Existing in the space somewhere between a traditional fair, a Mardi Gras celebration, a political convention, and the largest family reunion you’ll probably ever find, the Neshoba County Fair — or simply “the Fair,” to those that attend — is an experience that is truly unique to the state of Mississippi, and for most people who attend every year, the Fair is the end-all, be-all event of the year.

As this year’s edition of the Fair, the 127th installment, gets set to kick off on Friday, families not only across the state, but across the nation, are preparing for their upcoming week, and one such family is Oxford’s Jack and Gay Stubbs.

A Philadelphia native, Jack’s roots at the Fair run deep, as his grandfather was one of the original founders in 1889 of what would come to be called the Neshoba County Fair. Born in July 1948, it only took Jack three weeks of his life to have his first Fair experience.

The Stubbs’s cabin houses five different branches of their family for the week, coming from places like Holly Springs, Oxford, Water Valley, and even North Carolina.

Their cabin can sleep up to 43 people, although the occupants have to make the best of sharing only two and a half bathrooms between them.

With a crowd like that at the cabin, one of the major concerns is getting everyone fed. Much like many others at the Fair, the Stubbs said that they divide the meal responsibilities between the families at the cabin throughout the week.

Smartly, Jack and Gay always get their meal out of the way on the opening day, preparing cold dishes such as ham, potato salad, and marinated shrimp for a more casual meal while the crowd rolls in on Friday.

“Friday night’s kind of like a cocktail party because everybody’s getting there, and people are coming in at different times, so you just eat and drink when you want to,” Jack said.

One of the most interesting things about the Fair is the wealth of family traditions at seemingly every cabin.

Gay singled out their family’s annual silly string fight held every Sunday afternoon of the Fair as well as one aunt’s tradition of bringing prizes for the children of not only their cabin, but also neighboring cabins as a couple of her favorite traditions.

Because the Stubbs family is actually scattered across several cabins around the Fair, Jack said that their cabin typically hosts a cocktail party at some point during the week where everyone can come together at one place and have a good time with the whole family.

The truly memorable traditions at the Stubbs cabin, however, speak to the Fair’s ability to bridge generational gaps.

“I think the main tradition is just sitting on the front porch, and we try to get my mother, who is 94, and Snooky (Williams, of Water Valley), who is 86, to tell stories about what it was like when they were growing up at the Fair so that the children and the grandchildren know what’s going on.”

Jack admits that even he can remember quite well a time when Fair cabins had no air conditioning and not much in the way of proper bathrooms, two basic amenities that have thankfully found their way into the fairgrounds.

However, this tradition of storytelling, and honestly almost everything the Stubbs would tell you about the Fair, comes back to one common theme — family.

“(Jack’s) grandfather started this as an agricultural way to promote the products of Neshoba County and Philadelphia,” Gay said. “What it has turned into is a bonding of families. Everybody goes back. Everybody has that tradition. I guess the best thing I can say about the Neshoba County Fair is that it’s a centering place for families.”

Branded as “Mississippi’s Giant House Party,” the Fair could just as easily be marketed as Mississippi’s largest family reunion.

“It’s kept our family really close,” Jack said. “So many people are amazed at how close we are with all our cousins. We do things all year-round, but everybody always comes back to the Fair, and we have a great time at this reunion.”

Jack’s claim becomes even more impressive when you learn that he has 32 first cousins and manages to see almost all of them multiple times a year, largely thanks to the Fair.

“If it wasn’t for the Fair, a lot of these cousins or family probably wouldn’t see each other,” he said. “It’s where you make an effort to get together to be with your family, and I think it’s kind of instilled in us.”

Yet, for all of the talking that anyone who attends the Fair every year can manage, the fact remains that nothing spoken can truly do it justice.

“I tell people that it’s really hard to describe the Fair,” Jack said. “It’s really something you have to see.”

This year’s Neshoba County Fair will be held on July 22-29. Weekly and daily wristbands can be purchased at the main gate.