FOR THE BETTER: For Ole Miss’ Freeze, Kelly, testy exchange ‘grew us closer’ 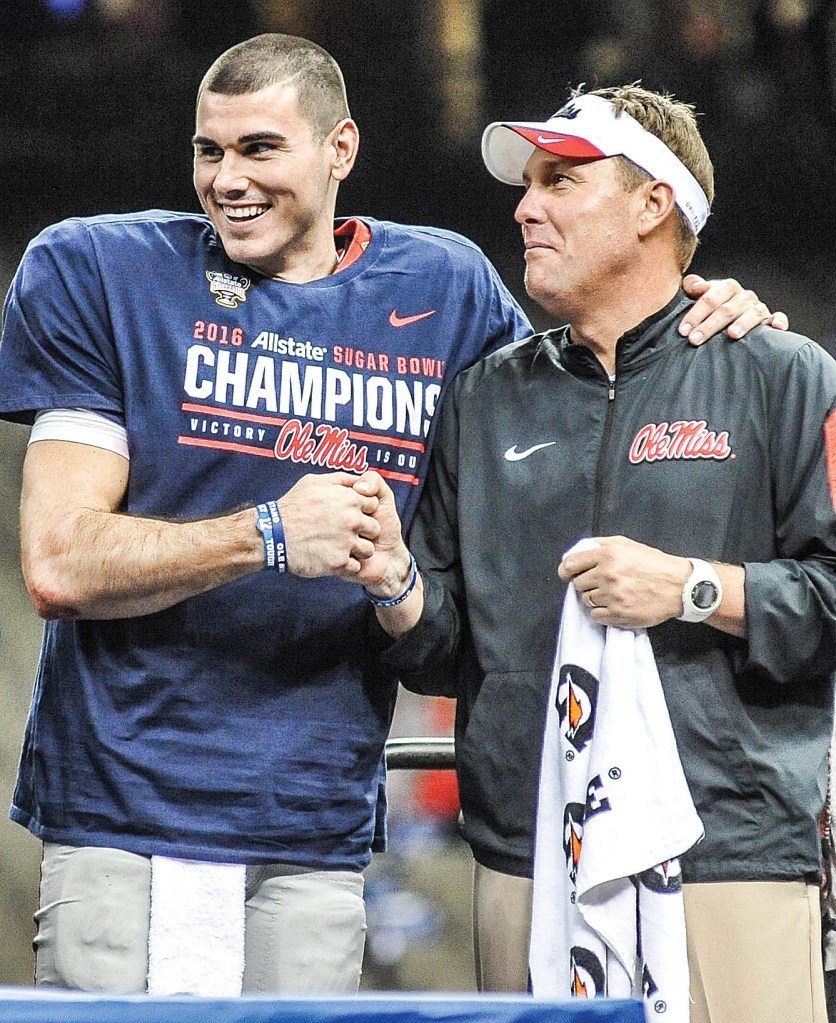 A year after Ole Miss coach Hugh Freeze, right, admittedly went overboard in trying to test quarterback Chad Kelly, the two claim to have a relationship that’s strong both on and off the field. (Bruce Newman)

Ole Miss coach Hugh Freeze revealed at Southeastern Conference Media Days that he recently surveyed his assistants to gauge their level of enjoyment working for him. Most of the feedback was positive, but Freeze admitted the poll showed him areas where their working environment can be improved, including one in particular.

“They said my gameday management with the coaches, I can be a bit sarcastic,” Freeze said. “So that’s one of my goals to work.”

Players aren’t immune to Freeze’s sarcasm either. Yet ironically, a moment where Freeze nearly went too far with his facetiousness could be fingered as the launching point of a strong bond that’s been formed between the coach and his castoff turned All-SEC quarterback, Chad Kelly.

In the middle of a practice last preseason, the two went back and forth during a verbal altercation where Freeze tried to get under the skin of Kelly, whose short temper got him booted off the team at Clemson and contributed to his arrest for his role in a bar scuffle back home in New York less than a week after signing with Ole Miss in December 2014.

During the exchange, which was first publicized during a story aired on ESPN’s College GameDay last fall, Freeze told Kelly to pack everything up and leave if it was all becoming too much, the kind of words Kelly hadn’t heard since being dismissed at Clemson in the spring of 2014.

“Something had been said, he had said something, and the next thing you know, we’re going back at it,” Kelly recalled at media days.

A few hardened tongue-in-cheek lines meant to motivate Kelly had backfired, and Freeze instantly regretted it.

“I crossed a line with my sarcasm,” Freeze told Gridironow.com. “I tried to dig in and see if I could break him. He came in (my office) afterward crying. I thought he was going to throw in the towel. That’s when he broke me.”

Freeze apologized for taking that tone with the player he’d decided to bring into his program despite the baggage that came with him, and the two ended up “hugging it out,” Kelly said. Since then, Freeze hasn’t had to worry much about Kelly’s performance on the field while Kelly hasn’t given his coach any reason to worry about him off of it.

Kelly enters his senior season having already set the school’s single-season record for total offense. He threw for 4,042 yards and 31 touchdowns last season, becoming just the third quarterback in SEC history to eclipse the 4,000-yard passing mark, while throwing just one interception over the last four games.

Freeze also gave Kelly more freedom to make plays with his legs toward the end of the season. Kelly added 500 yards on the ground and a team-high 10 rushing scores as a result.

“His last seven games last year were pretty good,” Freeze said. “I don’t know that I can look at a lot of things and say, ‘Man, you’re doing this really poorly.’ He did everything those last seven games pretty solidly.”

Kelly, who’s among the top quarterback prospects for next year’s NFL Draft, hasn’t been in any trouble during his time in Oxford. He hasn’t had any more dustups with his coach either.

He admittedly wondered what Freeze’s intention was with those harsh words last summer. Nearly a year later, the relationship between Kelly and his coach gives him a good idea.