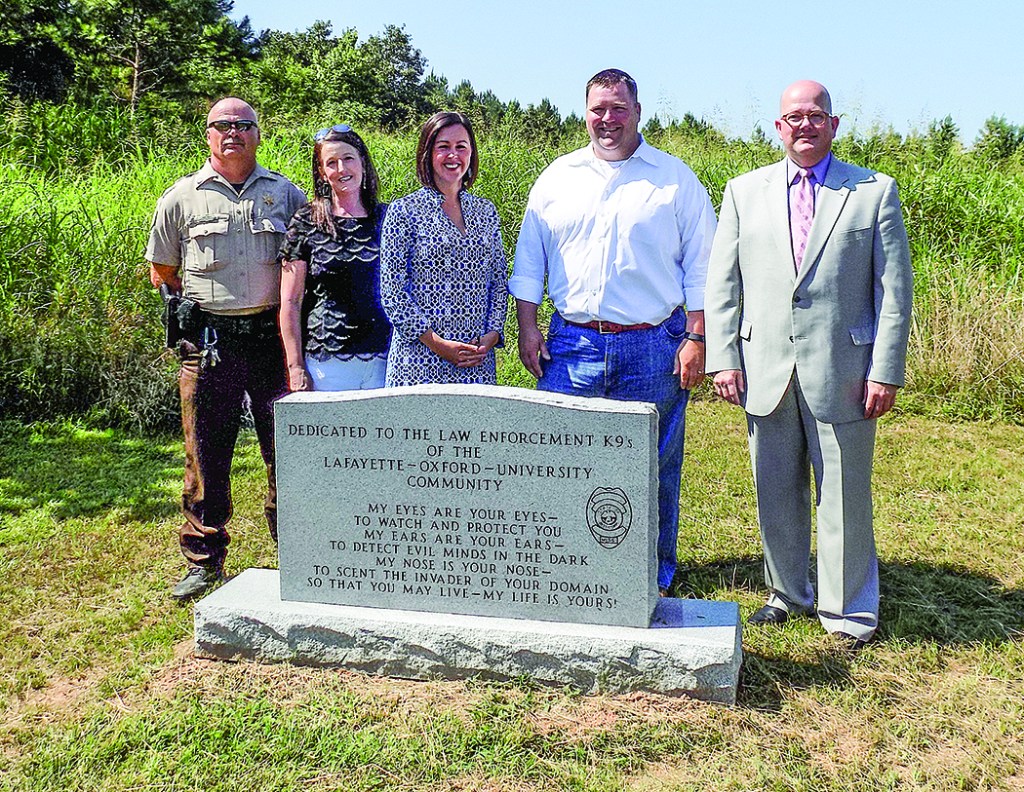 When Oxford Police Department K9 Baraka died in March of 2015, his handler laid him to rest at the F.D. “Buddy” East Training Complex.

“I knew this was the perfect spot for him,” said Baraka’s handler, former OPD officer Jacob Abel.

Baraka was buried on a hill that overlooks the shooting range in a small cleared out grove. On Thursday, that area was dedicated as an official cemetery for not only Baraka, but for all future OPD K9s.

“These four-legged officers give their best years in service to our community and we are looking to give them a respectful final resting place,” Abel said.

After Baraka’s death, Abel started a Go Fund Me account, which raised more than $1,800. He went to Waller Funeral Home to have a monument made for the new K9 burial site.

“When Jacob called asking about a marker, I thought, why don’t we just give this to you,”said Waller funeral director Anthony Williams. “We’re always looking for ways we can help our police officers. This was a way we could say ‘Thank you,’ and to say ‘We love you and we appreciate you.’”

The large marble marker was recently completed and set in the small cemetery. The front of the monument reads:

“My eyes are your eyes — to watch and protect you. My ears are your ears — to detect evil minds in the dark. My nose is your nose — to scent

the invader of your domain. So that you may live, my life is yours.”

On the back is a statement of gratitude from Waller Funeral Home.

Abel, who now works as a patrol officer with the Southaven Police Department, said the funds raised for the marker will be given to the Lafayette County Law Enforcement Officer Association, which manages the shooting range, to be used for burial expenses for future K9s and the beautification and upkeep of the memorial and cemetery.

Baraka, a Belgian Malinois, served OPD for nine years before retiring in the fall of 2013 when he started to have hip problems. He was killed a year and a half later after being hit by a car. Abel said Baraka’s skills as a K9 were outstanding and will be hard to replace, but not as hard as filling the void left in Abel’s life after losing his partner.

Williams Rental donated their time and use of a backhoe to dig the grave for Baraka.

Abel said the outpouring of support from the community helped him and OPD get through a difficult time after the loss of Baraka.

“It was really awesome to have that kind of support,” he said.