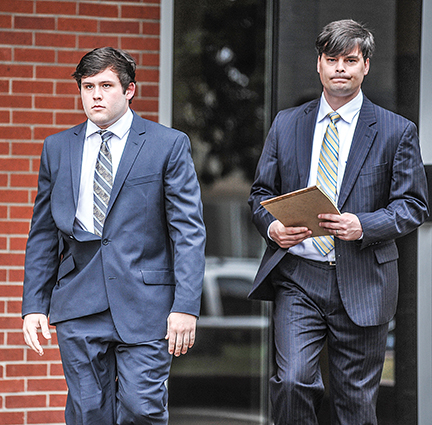 Former University of Mississippi student Austin Reed Edenfield, left, with attorney Clark Trout, leaves federal court after pleading guilty to placing a noose on the school's statue of its first black student, in Oxford, Miss. on Thursday, March 24, 2016. Edenfield waived indictment and pleaded guilty to a misdemeanor charge before U.S. District Judge Michael Mills. The charge says Edenfield helped others threaten force to intimidate African-American students and employees at the university. Edenfield will be sentenced on July 21 and faces up to a year in prison and a $100,000 fine. The government has recommended probation. (AP Photo/Oxford Eagle, Bruce Newman)

The second former University of Mississippi student was sentenced Thursday for his role in a prank that involved hanging a rope and Confederate flag around the James Meredith statue on the university’s campus more than two years ago.

Edenfield, 21, pleaded guilty in March to one count of using a threat of force to intimidate African-American students and employees by putting a noose on the James Meredith statue.

Another former student, Graeme Phillip Harris, of Alpharetta, Georgia, pleaded guilty to the same charge in June 2015 and was sentenced to six months in prison.

“The U.S. Attorney’s Office, in conjunction with the Department of Justice Civil Rights Division, will aggressively prosecute hate crimes and other civil rights violations which occur in our district,” said U.S. Attorney Felicia Adams. “I seriously appreciate the assistance of the FBI and the University of Mississippi in the investigation and prosecution of this case.”

According to court documents, on Feb. 15, 2014, Edenfield was invited by Harris to come out and drink with him and fellow student, Arthur McCarty. The three were members of the Sigma Phi Epsilon fraternity. The three were at the fraternity house and reportedly under the influence of alcohol when Harris decided, “he wanted to create a sensation” on campus using a Confederate flag.

Harris, Edenfield and McCarty decided they would place an outdated Georgia state flag containing the Confederate battle flag and rope on the Meredith statue. Knowing that James Meredith was the first black student enrolled at Ole Miss in 1962, Edenfield agreed to help Harris place the flag and rope on the statue and admitted to tying the rope around the neck of the statue when Harris was unable to get it tied.

All three students withdrew from the university and the Sigma Phi Epsilon fraternity closed its chapter on the Ole Miss campus.

McCarty has not been charged with any crime related to the incident.