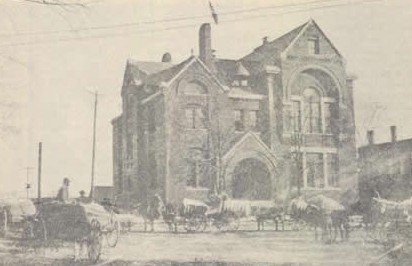 My older sisters and I spent the first years of our life in the home of my grandparents on South Lamar Boulevard.

Our father, whose family had lived in Oxford and Lafayette County since the early 1840s, had died shortly before I was born in late 1946. We lived at my grandparent’s home until I was 8, then we moved closer to the Square in our own home on South Lamar in 1954.

During the first years of my life, I have fond memories on being sent “up town” on errands for my grandmother or mother. I remember the traffic in Oxford was not like it is today, especially the amount of traffic on South Lamar. We kids of Oxford could ride our bikes anywhere with no fear of the traffic.

Oxford only had a population of around 4,000 in those days and the campus was about the same size. So getting around Oxford was quite easy.

I even started riding my bike to Oxford Elementary School when I was in Mrs. Van East’s second-grade class. I do not think any parents of young children in the second grade of 2016 Oxford would allow their children to ride their bikes to school. The traffic around Oxford today would not permit a large number of students riding their bikes to school. It would just be too dangerous for them.

In the summertime, one of my first chores of the day would be to get on my bike and ride “uptown” to get the morning mail. In those days most people had their mail sent to a post office box rather than being delivered to their home. Most everybody rented a post office box in the building that now houses City Hall. If you did not rent a box, you got your mail at the General Delivery window at the post office.

I still remember my grandparent’s post office box number. It was 325.

As with the Lafayette County Courthouse, the post office was a place that you would see almost every resident of Oxford. If you were to sit on the steps of the post office all day, you would eventually see a representative of every Oxford family coming to the building to check for their mail.

The adults would stop and talk with their friends about the weather, crops, politics, or just about anything you could think of.

I am sure that most old residents of Oxford have a story that centers on the post office. My old friend Larry Roberts, whose grandfather was Ike Roberts — the hunting buddy of William Faulkner and a former Lafayette County Sheriff — some time ago, told me a story of a hunting dog that was ordered from a catalog and sent to the local post office.

When Larry and his young friends went to pick up their hunting dog, the packing crate had the words and numbers “Redline 501,” written on the outside of the crate. Knowing that they would have a championship-hunting dog they thought that the dog should have a name to augment his status, so they named him “Redline 501.”

My grandmother, Nora Lee Fooshee Mayfield, was well known at the post office. My grandfather had built her a home on South Lamar in the late 1920s. They had moved to Oxford, as others before them, so their children could have the benefit of the Oxford city schools and the University of Mississippi. They did not move too far, it would be only from the Philadelphia Community on Highway 30 East.

With their home on South Lamar, they had about 10 acres of land, which they kept a cow or two.

My grandfather also raised a hog or two each year for butchering, and he even had a brick smokehouse for the curing of the hams and bacon.

He also had a large garden, orchard, and chicken coup in the backyard.

Every Saturday, my grandmother would go to the chicken yard and pick out a bird to be fried for lunch that day.

To replenish her supply of chickens, she had a deal with the local post office.

Citizens of Oxford used the post office as a delivery point for almost anything and baby chicks were no exception. When the chicks arrived at the post office and needed to be returned to the sender for some reason or another, the postmaster would call my grandmother.

If the postal service returned deceased chicks to the sender, they would be liable for the dead ones, so they cut their losses by selling the chicks to my grandmother at a discounted price.

The post office lost some of its charm and charisma when a deal was struck between the city and the Federal government. The new Federal Building on Jackson was constructed and the post office moved.

The city of Oxford offices are now housed in the old Federal Building. The area at the end of the hall was where the bank of post office boxes were arranged in three or four different sizes. As the old saying goes, “nothing is more constant than change.”

Now the post office is even farther from “uptown” Oxford.