Teens find that reading comics can be super 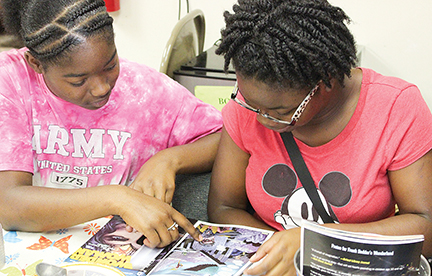 Kaylan, left, and Kyla Strong read a Teen Titan comic at the Comic Club meeting at the Lafayette County and Oxford Public Library.

A new reading program for teens 13 and over hopes to spread the love of reading with comics, graphic novels and manga.

The new Teen Comic Book Club meets at the Lafayette County and Oxford Public Library once a month for comic reading, fun and refreshments.

Comic books, unlike traditional books, use a combination of words and pictures to convey the story. Though most people think comics are only about super heroes and cartoons, many different subjects can be conveyed through comic books to describe events in greater details.

The club was created by librarian Carla Fulgham last month to introduce teens to comics. Comic, and other forms of graphic novels, provide a different level of literacy that is fun and easy to read, according to Fulgham.

Fulgham first become interested in comics in college, and become a fan of the comic series Sandman by Neil Gaiman. Fulgham saw the reading potential in comics and decided to host the club meetings in the library once a month.

Each month the club reviews a different comic book after having snacks, playing a game or making a craft project that go with the subject of the book. This months book and discussion was Ultimate Comics’ Spider-Man by Dendis Pichelli. After enjoying ice cream and chips, the club played a game of Jeopardy using facts from the comic.

“I find it to be a great thing,” club member Dontavius Webb, 13, said. “It is something I was very interested in.”

“It’s an area I have a certain amount of knowledge in,” Vinson said. “I grew up on them.”

The library has a large collection of more than 700 different comic books for visitors to check out. Among its collection are mature graphic novels such as Persepolies, the story of a young girl living in Iraq during the revolution, and American Born Chinese, which tells the story of a boy’s struggle with his Chinese identity.

“I think a lot of the things the library does are good for the youth,” Demetra Webb, mother of two said.

There is no qualifications to join the comic club, but a love of reading is strongly encouraged. Library visitors can find signs all around the library promoting the next meeting, or can talk to a librarian about joining.

The next Teen Comic Club meeting will be held in August. Fulgham also hopes to start a comic book club for children next month.

“As long as kids keep coming, we will keep having them,” Fulgham said.