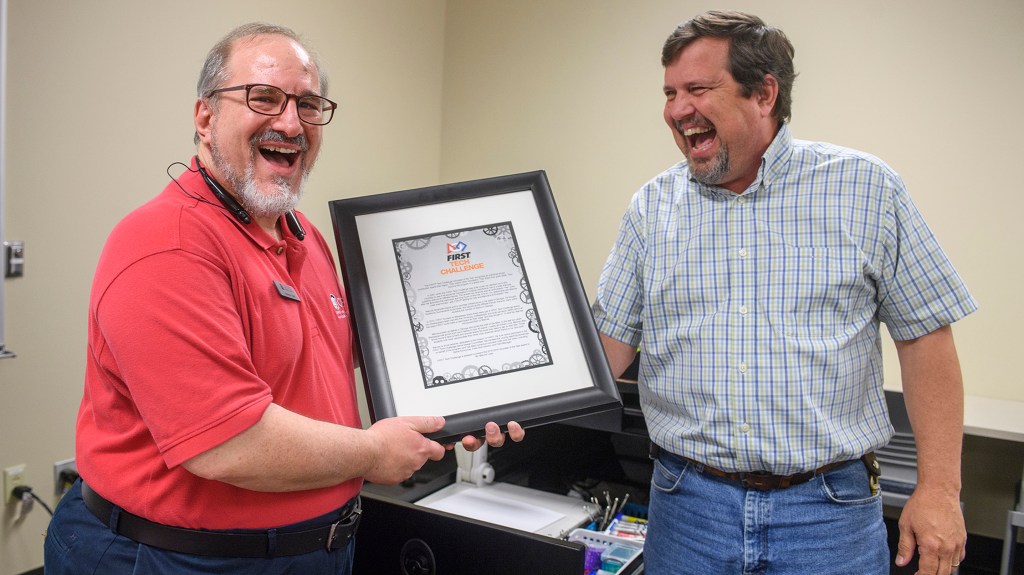 Mannie Lowe is recognized as the FIRST Tech Challenge Volunteer of the Year. Photo by Thomas Graning/Ole Miss Communications

Mannie Lowe, a staff member at the University of Mississippi, is the 2016 recipient of the International Volunteer of the Year Award from FIRST, an organization that promotes an interest in STEM fields among students, with programs such as the FIRST Tech Challenge robotics competition for middle- and high-schoolers.

As this year’s honoree, Lowe, a program manager at UM’s Center for Mathematics & Science Education, was selected from more than 200,000 volunteers in 80 countries worldwide for his more than 12 years of service to the organization. He received an honorary certificate from FIRST at a surprise ceremony in July at OleMiss.

As the manager for FIRST Tech Challenge robotics, Lowe, who previously ran FTC programs as a volunteer in Georgia, has spent the past five years carving out an infrastructure to allow Mississippi middle and high school students, as well as home-schooled children, the opportunity to design and build their own robots and compete in tournament-style competitions at the local, state, regional and even international level.

The competitions allow students to learn and apply knowledge in such disciplines as engineering, computer science, physics and mathematics. Many students participating in FTC programs go on to earn valuable scholarships to study STEM fields at colleges and universities around the world.

Under Lowe’s leadership, FTC programs in Mississippi have grown from just four robotics teams in 2012 to more than 40. Lowe spends about two days a week on the road, working with students and teachers to help FTC teams with their robot designs, a task that requires countless hours of travel and work after hours.

“First and foremost, Mannie has a passion for what he does,” said John O’Haver, CMSE director. “He loves what he does and is loved for it. He will use his vacation time and weekends to drive across the state to work with students and teachers. He will tell you himself that he feels like he is living the dream.”

Lowe also helps plan other events related to the robotics competitions, such as regional qualifying tournaments in communities across the state. Each February, the CMSE hosts a statewide competition at UM. This year, the event attracted more than 450 students.