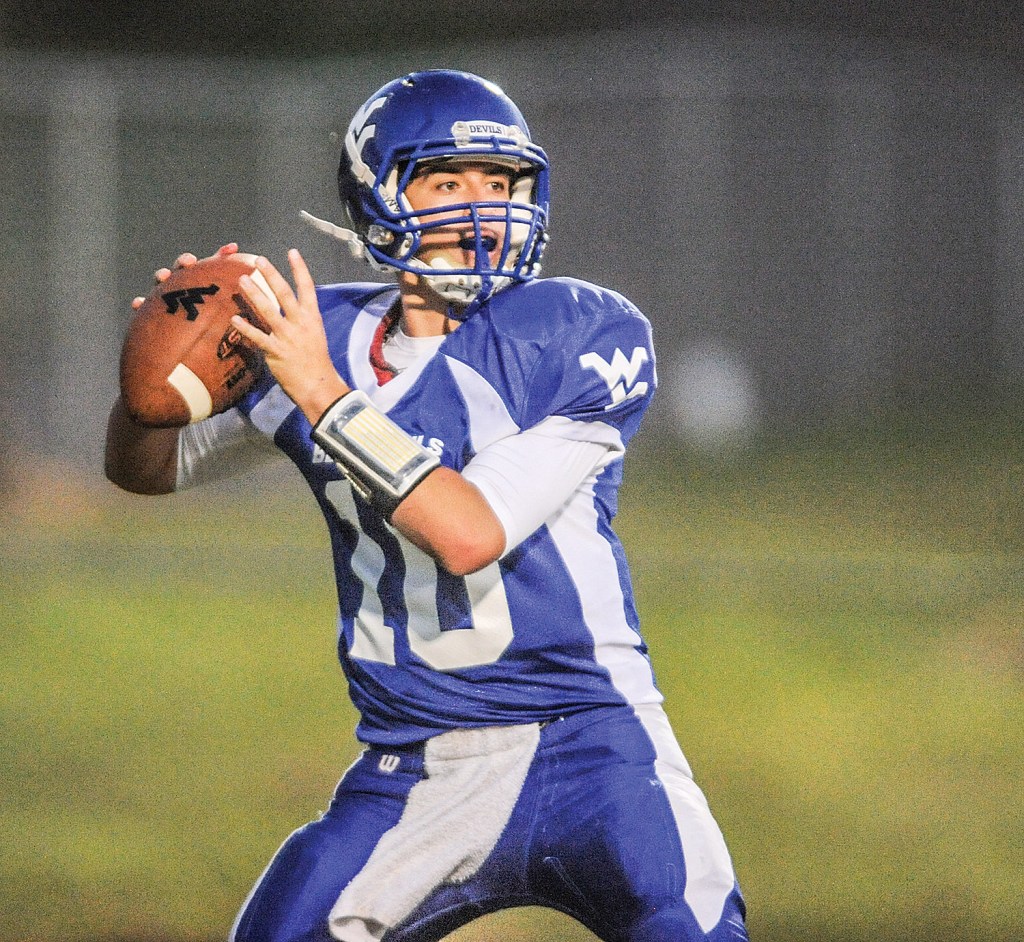 Water Valley has its quarterback in junior Ty Varner (10), but the Blue Devils are still searching for contributors at other positions heading into fall camp. (Bruce Newman)

Brad Embry feels good about certain parts of his team. Others are a work in progress.

It’s another way of saying Water Valley’s head man is like most other high school football coaches this time of year.

Water Valley has experience at the skill positions, including quarterback Ty Varner back for his junior season. But Embry will also have his eyes on a handful of positions beginning next week where the Blue Devils need to find answers to questions that have been lingering since the end of last season.

Embry said his players are ready to get to work.

“You’ve kind of seen the intensity pick up with the intensity with the kids in the last few days and weeks,” Embry said. “I think we’re at a good point. We’re at a point. That’s all it is right now. We’ve got to put the work in and earn what we want.”

A year ago at this time, the Blue Devils were green under center following the graduation of Jonathan Kent. It’s a different story this year with a full year of experience for Varner, who completed 48 percent of his passes for 1,340 yards and seven touchdowns as a sophomore.

Embry said he expects Varner to make the natural progression in his game of being a year older.

“He throws the ball well and he’s got a quick release,” Embry said. “Makes good, quick decisions. We need him to be more of a run threat than he was last year.”

Running back Taghee James, who could also take snaps in certain situations, is back for his senior season while senior Hartley Camp returns at H-back. 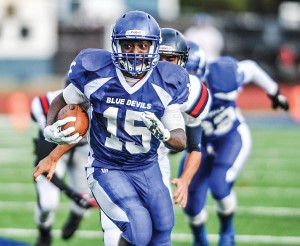 Senior Taghee James (15), who could line up behind center at times, gives the Blue Devils versatility in the backfield. (Bruce Newman)

There’s potential at receiver, too. Jalin Morgan and Jayvon Morgan are back and will be joined on the outside by sophomore Jacob Welch while Quaterrious Tolbert and Martavius Rockette are working in the slot.

Even with all those options, Embry said he’s looking for another receiver or two to step up and give the Blue Devils as much depth as possible at a position where they’ll need it with most of them playing on both sides of the ball.

“They can’t play every down on offense, defense and special teams,” Embry said. “We’ve got to have some depth there.”

All eyes will be on the offensive line and kickers.

Graduation hit Water Valley hard up front as senior Rob Mitchell, who will play center this fall, is the only lineman returning who has significant experience at the varsity level. Embry said he was encouraged by the play of those vying for the other four spots this spring, but the fall is a different animal.

“A lot of inexperience, and sometimes that takes some time to gel, too,” Embry said. “I’m OK with our parts, but I guess with me being an old offensive line coach, I understand what it takes to be great on the offensive line. Having the parts and gelling and clicking on all cyclinders is two different things, so we need to get that (worked out).”

“We don’t have a kicker,” Embry said. “We were spoiled. We had an All-State kicker for three years in a row. Unfortunately those guys don’t just fall out of the sky and into your lap.”

Water Valley also has to find a replacement at safety for multi-year starter Kirkland Horton, who’s now at Itawamba CC.