Thacker Mountain strikes a chord at The Fair 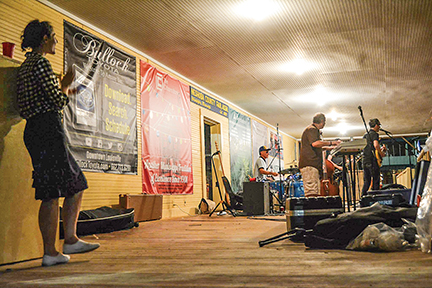 Humorist Harrison Scott Key’s first Neshoba County Fair experience had all the makings of the “wait’ll-you-hear-this” essays that landed him a successful book and wide accolades for his live performances, which are far more akin to stand-up comedy than a typical book reading.

While Michael Dukakis stumped for the crowd, a 13-year-old Key, preoccupied with a funnel cake, found himself an accomplice in trolling the Democratic presidential candidate. Though it was innocent — someone handed him a sign; he dutifully waved it, along with others, at the hapless candidate — it was an inadvertent show of support for the Republican rival, George H.W. Bush.

Key’s trips to the fair as a kid were full of those experiences, marked by a fascination with this spontaneous city and bookended by hot car rides from Puckett to Neshoba County that left him pining for one of those little houses with air conditioning that lined the concourses.

This year, he’s upgrading to one of those plywood shacks as he guests on the Thacker Mountain Radio show, Saturday at 7 p.m., along with musicians Leo “Bud” Welch and The Amelia Eisenhauer Band at the Pavillion. Thacker in Neshoba will air Aug. 13 at 7 p.m. on Mississippi Public Broadcasting.

“When I was a kid, I didn’t get it,” said Key, author of The World’s Largest Man: A Memoir. “I couldn’t wrap my head around how people had these homes they only live in for one week a year. It’s still hard to describe. Like, ‘Imagine there’s a place in the middle of nowhere where once every summer they bring a Ferris wheel and a Gravitron, and everybody stays for a week.’ It’s sort of emblematic of the entire state of Mississippi, which is also difficult to understand unless you see it.”

Known for its horse races, classic car show, food and old-fashioned fan-waving politickin’, the “Giant House Party” hosted Thacker Mountain Radio’s first show outside of its Oxford home base in 2008, a traveling tradition that has grown to include communities such as Ocean Springs, Laurel and beyond.

“We have made it a priority to expand and grow the traveling side of the show,” said executive producer Kathryn McGaw. “It’s great to expose people to the show, and it offers opportunities to folks around the state to hear great music and literature.”

Host Jim Dees hangs much of the show’s success on the efforts of McGaw, whose show tonight will be her last with Thacker Mountain, and Lyn Roberts, the neighbor and Square Books manager who recruited him in 2000 to fill-in host the show, which is broadcast statewide on MPB.

“It sounded like fun,” said Dees. “I knew the house band, the guys who originally started it, and thought I would give it a whirl until they could find somebody to do it. They never found the guy, so I guess I’m the permanent interim.”

Since the beginning, the show’s format has included a musical guest and an author, although in the early days the program was rougher, less produced and tended to lean toward music, with interludes and segues provided by The Yalobushwackers.

The show’s mission of celebrating and exposing the world to the diversity of the South remained intact even as it began to travel the state in the mid-’00s. Traveling shows are more of a challenge than performing for the hometown crowd, admitted McGaw, if only because the staff tries to make a big statement when it hits the road.

“Putting together a successful show means talent that’s going to make you have goosebumps, straighten up in your chair or stand up and dance,” McGaw said. “When we’re able to achieve that roller coaster of emotion in 60 minutes, that makes you feel something. When you experience that with a roomful of strangers, when you come out the other end you’re not strangers anymore.”

One of Dees’ favorite memories of performing the show at the fair occurred that first time. Jim Dickinson, the legendary producer and session musician whose sons are Luther and Cody of the North Mississippi Allstars, played piano alongside blues guitarist Jerry Lee “Duff” Dorrough and The Yalobushwackers.

Dees stepped away from the stage, something he rarely does, to try to catch a breeze during the interlude. As the band leaned into Down in Mississippi, he experienced the show as a spectator and for once could fully appreciate the experience live, not a jumble of memories.

“A lot of times when you’re doing these things, you’re so in the moment you don’t step back and see the moment,” he said. “But it hit me how cool this is. We’ve got a great radio show, these musicians I love are playing this song and the place is packed.”

The opportunity to appear on Thacker Mountain is a fulfillment of sorts for Key, who grew up listening to the live radio variety showPrairie Home Companion and was an instant fan of Thacker Mountain. As a graduate student in theater at the University of Mississippi in the late ‘90s, he even brushed against potential radio-star fame when he ran into one of the show’s early hosts at a bar.

“I remember meeting this guy [Tom Arriola] and doing all of my animal sounds and sound effects,” remembered Key. “I tried, basically, at a bar, to convince this man that I should be the host because I could do so many sound effects.”

Blame it on Prairie creator and host Garrison Keillor.  After a lifetime of listening to the show, Key equated radio entertaining with the myriad of sound effects used.

“I remember I did my elephant, my helicopter, my seagull — I had just perfected the seagull — and my baby crying from another room.”

Now, two decades later, he’ll have his chance to impress the powers that be.

“We exchanged numbers and I ended up quitting the acting program and leaving Mississippi. So I feel like after almost 20 years, I’m finally going to be on the show. It’s a big deal for me.”

This story is from Mississippi Today, a nonprofit news organization. For more, visit www.mississippitoday.org.